PM Modi To Launch Ujjwala 2.0 Through Video Conference At UP

Prime Minister Narendra Modi will be joining an event to be held in the state's Mahoba district through video conferencing. CM Yogi Adityanath will also be attending the event. 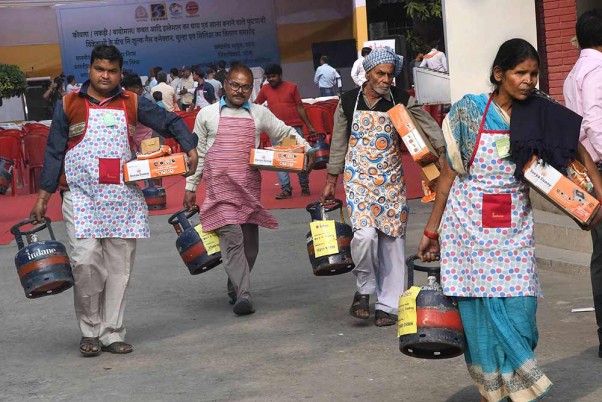 On Tuesday,  Prime Minister Narendra Modi is set to launch the Ujjwala 2.0 (Pradhan Mantri Ujjwala Yojana-PMUY) scheme during an online event in Uttar Pradesh. The event will be held in the state's Mahoba district and will be attended by chief minister Yogi Adityanath. Meanwhile, the PM will be joining via video conference.

PM Modi is set to address the nation during the event and interact with the beneficiaries of the scheme. The PM is also set hand over LPG connections to beneficiaries.

At the event, the prime minister will hand over LPG connections, interact with beneficiaries of the Ujjwala scheme and also address the nation.

The spokesperson said in the first phase of the scheme, 1,47,43,862 LPG connections were made available to the poor families of the state.

Those families who were left out in the first phase of the Ujjwala scheme will be benefited in the second phase, he said.

On the occasion of World Biofuel Day, Chief Minister Adityanath and Union Petroleum and Natural Gas Minister Hardeep Singh Puri would inaugurate the Biofuel Exhibition organized at the parade ground of the Police Lines in Mahoba district.

Compressed biogas plant being set up in Muzaffarnagar district will also be inaugurated on this occasion, the spokesperson added.