'I Want To Eliminate Terror, Opposition Conspiring To Finish Me': PM Modi In Patna 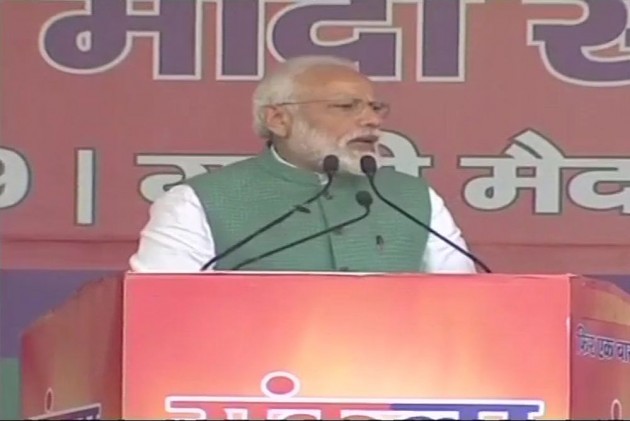 Prime Minister Narendra Modi on Friday hit out at the Congress in Patna for "demoralising the Indian Air Force" and "questioning" the recent air strike in Pakistan.

"Now they have even started asking for proof of the Airstrike. Why are Congress and its allies demoralizing our force? Why are they giving statements which are benefiting our enemies?" Modi said.

The statements made by the opposition parties after the preemptive air strike on terror camps have made only people of Pakistan happy, he claimed.

He said that at a time when the armed forces were combating with enemies across the border and within India, "some people were busy making statements to please Pakistan".

He collectively slammed the Opposition and said that "these days a competition is underway to abuse the 'Chowkidaar', but you be assured, this 'Chowkidaar' of yours is as alert as ever."

He alleged that when India should have spoken in one voice, 21 opposition parties had gathered in Delhi to adopt a resolution condemning the government.

"While I want to eliminate terror, opposition parties are conspiring to finish me," Modi said.

Modi is sharing the stage with Bihar Chief Minister Nitish Kumar after ten years at the rally.

Speaking on the progress of Bihar, Modi said that infrastructure is being improved in Bihar.  "BJP government is working on all departments, including roadways, railways and airways."

The ruling coalition's Sankalp rally at Gandhi Maidan was also addressed by Chief Minister Nitish Kumar and Union minister Ramvilas Paswan. The three tall leaders of the NDA would blow the bugle for the upcoming Lok Sabha polls in the politically important Bihar having a total of 40 Parliamentary seats.