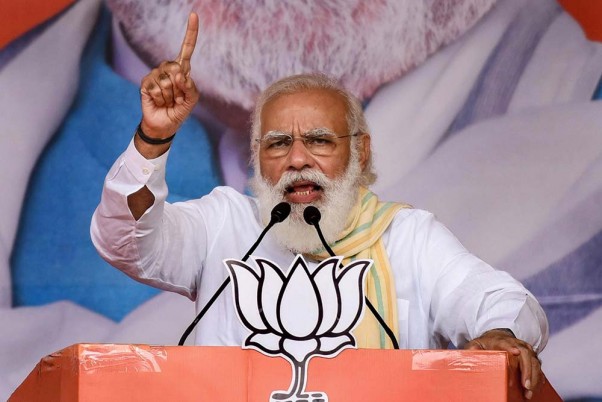 Prime Minister Narendra Modi on Monday tore into the opposition over the protests against the new agri-marketing laws, accusing them of playing tricks against the farmers.

The attack comes when thousands of farmers are gathered at the entry points of the national capital, seeking the repeal of the three laws, which Modi called “historic”.

"The farmers are being misled on these historic agriculture reform laws by the same people who for decades have misled them," he said, referring to the opposition parties but not directly naming them.

The prime minister was addressing a public meeting in his Lok Sabha constituency Varanasi, where he was scheduled to spend several hours.

Modi said apprehensions and protests are being whipped up by those opposing the Acts. They are misleading society, he said.

"These same people have in the past played tricks with farmers in the name of MSP, loan waiver and fertiliser subsidy," he said. Farmers have been duped for quite a long time, he added.

He also said that the new farm laws are efforts to double farmers incomes. They will now have access to more options to sell their crops.

Efforts are on now to ensure doubling of farmers' income, Modi said, listing schemes launched for them. Earlier, he dedicated to the nation the six-laning of the 73-km highway from Varanasi to Allahabad.

"Today, UP is getting recognition as 'Express Pradesh'. Everyone knows what the situation used to be in the past,” he said, referring to the expressways projects undertaken in the state.

The prime minister will then attend the Dev Deepawali Mahotsav.

Modi will then arrive at Ravidas Ghat Jetty and pay floral tributes to the statue of Sant Ravidas.

Before flying back to New Delhi, he will visit the Sarnath Archeological site and watch a light and sound show.