PM Modi could not introduce his newly-inducted union ministers to Rajya Sabha as several slogan-shouting opposition members trooped into the well of the House to protest over various issues. 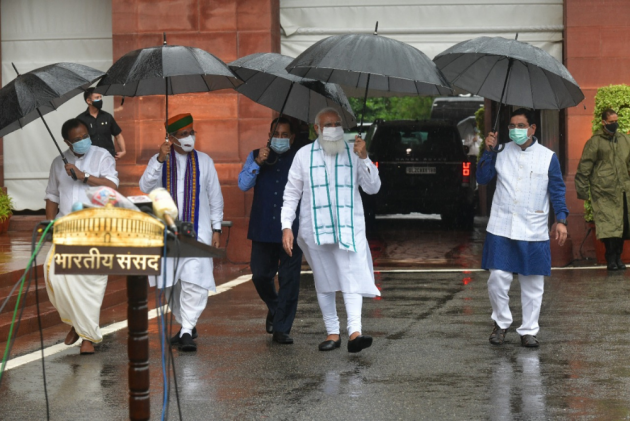 With the Monsoon Session of Parliament slated to begin on Monday, Prime Minister Narendra Modi addressed the Opposition ahead of the session and asked them to ask "tough questions". As soon as the House reassembled at 2:00 pm, there were again uproarious scenes, and the House was adjourned till 3:00 pm by Deputy Rajya Sabha Chairman Harivansh. The PM, however, added that the Opposition must also allow the government time to reply.

Speaking in parliament , IT Minister Ashwini Vaishnaw said, "There is no factual basis to suggest use of Pegasus amounts to surveillance."

Addressing media persons outside the Parliament House Complex, PM Modi said, "I would like to urge all the MPs and all parties to ask the most difficult and sharpest questions in the Houses, but should also allow the government to respond in a disciplined environment".

He further added that this will boost democracy in India, strengthen people's trust in the governance process and also increase the pace of development.

However,  within minutes of the Session commencing on Monday,  Lok Sabha was adjourned till 2 pm following protests by the Opposition.

Following this, the prime minister stood up to introduce the newly inducted ministers who had taken oath on July 7 following a major rejig in the council of ministers.

Criticising the Opposition for not allowing the prime minister to introduce the new ministers,  Singh said such a thing was happening for the first time in his 24 years of parliamentary career.

"The strength of Parliament is in maintaining healthy traditions. Both Opposition and Treasury should maintain healthy traditions. Even if one or 50 new ministers are inducted, the whole House listens to their introduction by the prime minister with decorum... This is sad, unfortunate and an unhealthy approach," Singh, who is also the Deputy Leader of Lok Sabha, said.

The Prime Minister also commented on the disruption. "I thought there would be an atmosphere of excitement in the house. We welcome new women and Dalit MPs. I wanted to introduce MPs. Few people don't want Dalit MPs becoming minister, women becoming ministers," PM Modi said amid ruckus created by Opposition in Parliament.

Modi appealed to Speaker Om Birla to consider the introduction of the ministers with the submission of their list to the House.

In his comments to media ahead of the session, the PM also spoke about Covid-19 vaccinations. "Over 40 crore people have been vaccinated against COVID-19; inoculation being taken forward at a fast pace," the PM said.
He said that the Covid-19 pandemic has gripped the entire world and added that the government wanted meaningful discussions in Parliament over it.

In this respect, Modi said that he has urged all floor leaders to take some time out Tuesday evening. "I would like to give them detailed information on the pandemic," Modi said, adding that the government wanted discussion both "inside Parliament as well as outside the Parliament with floor leaders on Covid pandemic".

The PM's media address was followed by an all-party meeting held on Sunday ahead of the session in which the PM assured the Opposition that all issues shall be debated and discussed constructively and in detail in Parliament.

Meanwhile, leaders of various parties met at Parliament House to chalk out a joint strategy to take on the government.

Congress president Sonia Gandhi chaired a meeting of party MPs from Lok Sabha where it was decided to vociferously raise issues of farmers' protest, price rise including of petrol and diesel and "mismanagement" of COVID-19 in the House.

Congress MP Manish Tewari has moved an adjournment motion on the issue of farmers' protest.