"It's nothing less than a dream. Will share this proud moment with everyone. Modi deserves another chance as the country's head," said one of the sanitation workers whose feet was washed by Modi 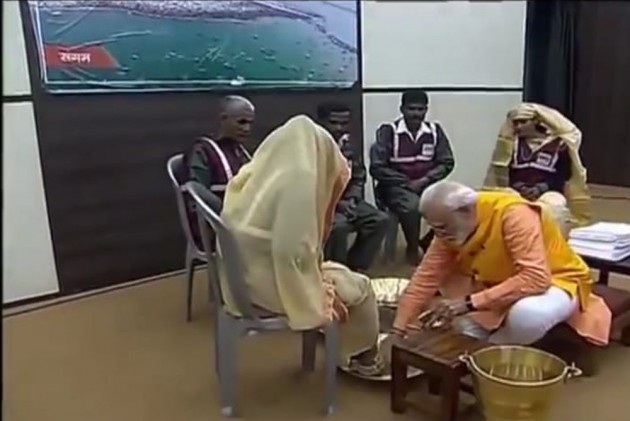 During his visit to Prayagraj to attend the Kumbh Mela on Sunday, Prime Minister Narendra Modi washed the feet of sanitation workers, whose efforts were acknowledged at the occasion of "Swachh Kumbh Swachh Aabhaar" award.

The sanitation workers were shocked and overjoyed at the Prime Minster's humility.

"It's nothing less than a dream. Will share this proud moment with everyone. Modi deserves another chance as the country's head," said one sanitation workers whose feet were washed by Modi according to a report.

Honouring remarkable Safai Karamcharis, who have taken the lead when it comes to realising the dream of a Swachh Bharat!

I salute each and every person making a contribution towards a Swachh Bharat pic.twitter.com/IsjuCgjlkn

Modi also took the holy dip at the Sangam - the holy confluence of sacred Ganga, Yamuna and mystical Sarawasti rivers -on Sunday and prayed for peace and prosperity of the nation.

Had the good fortune of taking a holy dip at the #Kumbh. Prayed for the well being of 130 Crore Indians. pic.twitter.com/jTI2QbmWxb

Clad in a grey sweater, Modi, who is reportedly nursing a cold and cough, took the dip in a specially marked area at the ongoing Kumbh Mela. With folded hands, he then turned all around in the waist-deep water.

Dressed in an orange kurta and wrapped in a saffron shawl, the Prime Minister then participated in the 'Triveni Puja' conducted by a group of priests, offering milk, fruits, a red saree and chandan to the holy rivers.

Amid chanting of hymns, the prime minister also did a brief 'Sankalp' for which he later offered some 'dakshina' to the priests. He was accompanied by UP Chief Minister Yogi Adityanath and state BJP chief Mahendra Nath Pandey during the rituals.

Modi later also performed the 'Aarti' and interacted with the priests who conducted the puja.

A sacred thread was tried to his right wrist as a symbol of blessings that come from propitiating the holy rivers.

The Prime Minister, who had arrived in Prayagraj in a special Indian Air Force (IAF) chopper, was received by the Chief Minister, Health Minister Siddhartha Nath Singh and district officials at the helipad.