PM Modi Will Take Care Of It: Trump On Tackling Pakistan-Sponsored Terrorism

US President Donald Trump has backed India's position on Pakistan-sponsored terror and said that Prime Minister Narendra Modi would 'take care' of the issue. 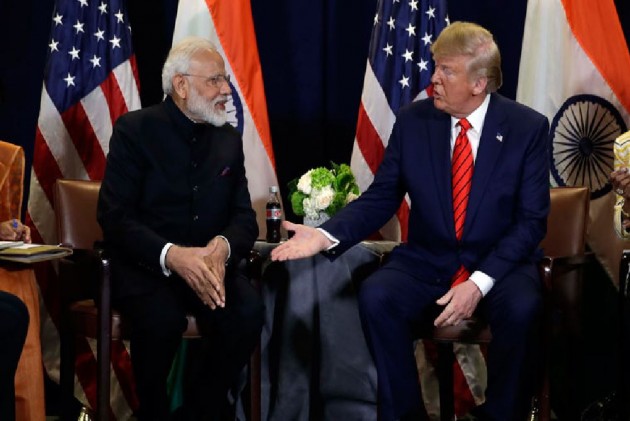 US President Donald Trump has backed India's position on Pakistan-sponsored terror and said that Prime Minister Narendra Modi would "take care" of the issue.

He said PM Modi had given the message on terrorism to Islamabad "loud and clear" from the 'Howdy, Modi!' stage, which was shared by the US President on Sunday.

Trump, when asked what message he had for Pakistan on being actively involved in training militants, said: "Well, I mean, the message is not for me to give, it's for Prime Minister Modi to give.

US Will Soon Have Trade Deal With India: Trump Assures PM Modi After Meeting

"And I think he gave that loud and clear on the other day when we were together (in Houston for 'Howdy, Modi!'). He gave a pretty loud message. And I'm sure he'll be able to handle the situation."

Trump was answering a query related to Pakistan Prime Minister Imran Khan telling a thinktank that the Pakistan Army and the ISI had trained the al Qaeda, and reports that thousands of terrorists were reportedly ready to enter India.

On the US saying it stood with India in the fight against Islamic radical terrorism, and what he thought about Imran Khan admitting that the ISI had trained the al Qaeda, Trump said that he hadn't heard of that.

Asked about his talks with Imran Khan on Monday, Trump said that it was a "very good meeting".

"It was a long meeting and we discussed a lot. And I think he'd like to see something happen that would be very fruitful, very peaceful. And I think that will happen, ultimately.

"I really believe that these two great gentlemen (Modi and Imran Khan) will get together and work out something.

"You know, you mentioned Pakistan, but Iran would have to be at the top of the list. Because if you look at terrorist states, that's been the number one for a long time.

"But I really believe that Prime Minister Modi and Prime Minister Khan, they get along -- they will get along when they get to know each other. And I think a lot of good things will come from that meeting," Trump said.

On ties with India and Modi, Trump said: "The relationship has never been better, I say, than it is right now, between the Prime Minister, myself, India, and the United States."