Actor Mithun Chakraborty joined the BJP in Kolkata on Sunday in the presence of BJP leaders Kailash Vijayvargiya and Dinesh Trivedi. 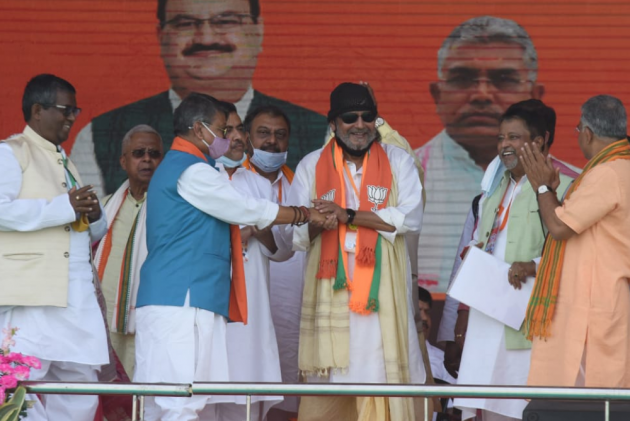 Actor Mithun Chakraborty joined the BJP on the dais of Prime Minister Narendra Modi’s Brigade Parade Ground rally on Sunday and called for a change of regime in Bengal.

The Bengali actor of national fame was a Rajya Sabha MP of the state’s ruling Trinamool Congress (TMC) from 2014 to 2016, till he resigned citing ill health in the aftermath of the chit fund scam that dragged his name into the controversy.

On Sunday, standing on the dais and addressing the people a few minutes before Modi’s arrival, the actor said, “Today is like a dream. The place in Jorabagan area where I am now coming from is a blind lane. No postman used to find it. Now I am on the dais with so many senior leaders. The world’s biggest democracy’s biggest leader, prime minister Narendra Modi, will be here soon. Isn’t this like a dream?”

Staying true to his image as an action hero, Chakraborty said he had only one message to the voters and it was that “Dada” – as he is sometimes referred to – “does what he says and has never fled away.”

It means, “I am neither Joldhora nor Balibora (non-venomous snakes); I am a bonafide cobra. One bite makes it picture perfect. Yes, that’s what going to happen in Bengal this time.”

Mithun Chakraborty on Sunday did not rule out becoming a minister in Bengal if the BJP managed to win the Assembly elections. When journalists asked him of the possibility after the rally ended, he said, "Who knows? Maybe!"

Reacting to his sting in the TMC, he said, "I don't comment to make any ill remark towards anyone. It was my mistake. The blame is on me."

Earlier, Chakraborty had shared close ties with chief minister Mamata Banerjee, whose government invited him to inauguration of the Kolkata International Film Festival and conferred the Banga Bibhushan award on him in 2013, before sending him to the Rajya Sabha.

However, Chakraborty distanced himself after the chit fund scam that dragged his name into the controversy as he had received payments from the errant chit funds as their brand ambassador.