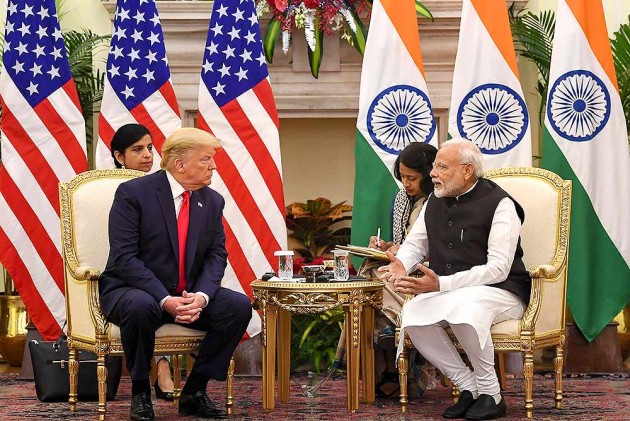 Prime Minister Narendra Modi had a telephonic conversation with US President Donald Trump on Saturday as the COVID-19 virus continued to race through the world infecting several thousands of new people in different countries, but with most severity in the United States.

The two leaders exchanged views on the ongoing pandemic and its impact on global well-being and the economy. They also "touched upon" the significance of how the practice of Yoga and Ayurveda can ensure physical and mental well-being in these difficult times, a MEA statement said.

Modi conveyed deep condolences for the loss of lives in the US and his prayers for early recovery of those still suffering from the disease.

The two leaders stressed on the special relationship between the two countries even as the Prime Minister reiterated India’s solidarity with the US in overcoming this global crisis together.

Over the past few days, PM Modi had been holding similar conversations with heads of government and world leaders from different parts of the world. On Saturday, he also spoke to the Presidents of Brazil and Spain and also the Spanish Prime Minister. His conversation with all the leaders had stressed on the close cooperation between them and their respective countries in meeting the challenge of COVID-19. The Prime Minister also expressed his condolences for the deaths of people from the pandemic in these countries.

Modi and Trump also agreed to deploy the full strength of the India-US partnership to resolutely and effectively combat Covid-19. They also exchanged notes on the respective steps taken in each country for mitigating the health and economic impacts of the pandemic.

They agreed that their officials will remain in close touch with respect to the ongoing crisis.

New York is now the global epicentre of the outbreak with a total of 102,863 confirmed cases on Saturday and with over 63,000 cases in New York city alone.

State’s governor Andrew Cuomo had warned that people would die unnecessarily for lack of ventilators in areas most devastated by the outbreak.

He said he would deploy the National Guard to enforce a new executive order that would allow state authority to redistribute ventilators from hospitals and other healthcare institutions to parts of the state most urgently in need.

The state will need 37,000 ventilators to deal with the peak of the virus expected to hit New York at the end of April. The city mayor Bill de Blasio said 400 additional ventilators are required by Sunday.

Hospitals and morgues in New York are struggling to cope with the pandemic as emergency field hospitals has been set up in the iconic Central Park and at the City’s conference venue Javits Centre.

The two top US automaker, Ford and General Motors, said they were putting up a war-like effort in their factories for making ventilators.

However, there was some good news for New York on Saturday as 1000 ventilators arrived in the city from China and another 149 from the state of Oregon sent to meet the rising shortage.