Though Narendra Modi’s foreign policy is seen as tilting towards the US, he is aware of the importance of Russia and the need to maintain the special and privileged strategic partnership with Moscow. 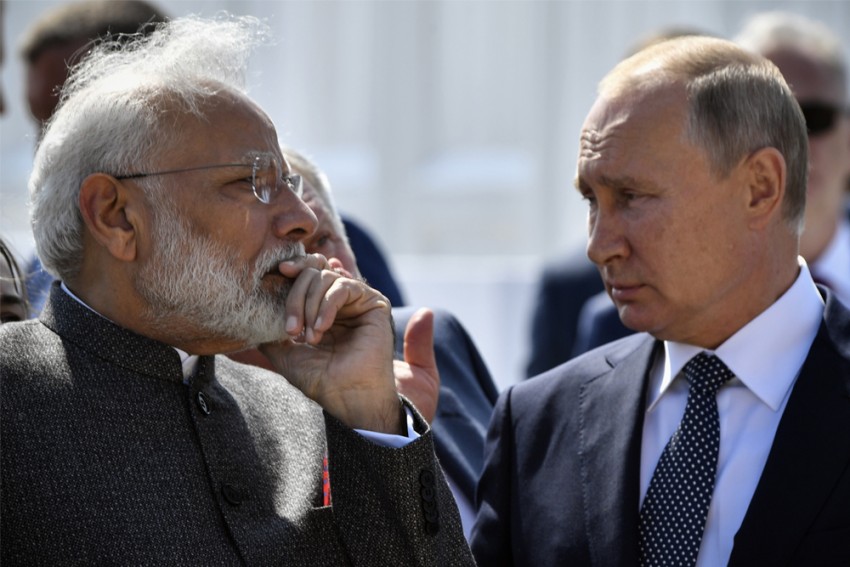 Like most Indians, Prime Minister Narendra Modi is well aware that in the past, when the US and most of its Western allies were close to Pakistan, it was Russia that stood like a rock behind India. Whether it was Kashmir, where Moscow used its veto to stop anti-India resolutions at the UNSC, or the liberation of Bangladesh, when the US-backed Islamabad and sent its Seventh Fleet to the Bay of Bengal in support of Pakistan, it was Russia that backed the Indian army. During Modi’s first term in office, as MEA officials were briefing the PM for his first summit with Vladimir Putin, he told an aide, Russia is important to India, they had stood by this country at critical times. So though Narendra Modi’s foreign policy is seen as tilting towards the US, he is aware of the importance of Russia and the need to maintain the special and privileged strategic partnership with Moscow.

The world has changed a lot since the time that India and Russia were on the same side of the Cold War divide. There has been a major churn in economic, political and diplomatic ties across the world and new equations have emerged. The rise of a self-confident China and its aggressive moves across Asia is now a reality and is changing the diplomatic dynamic in the region. China was used by the US since the early ’70s to cut to size the former Soviet Union during the latter part of the Cold War era. The very country that Washington had used against Moscow is now posing a major challenge to America’s place in the world. Though the US remains far ahead of China at the moment, America realises that in another twenty years or so, Beijing can challenge US superpower status. The new divide is China and Russia on one side and the US and its Western allies on the other. India has joined the quad, with the US, Japan, and Australia, three democracies in the Indo-Pacific region to counter China. Beijing and Moscow see the quad as an Asian NATO, though it is not a defence alliance. But the new formation, the AUKUS ( Australia, UK and the US) is one, with the aim of arming Canberra with top-of-line nuclear submarine technology to help guard the Pacific waters where China is increasingly active.

So is India ranged against China and Russia? Yes and no. Yes against China but not so with traditional ally Russia. Since last summer’s military confrontation between India and China in Ladakh which led to a nose-dive in ties, New Delhi has looked more and more to the US to counter China’s assertive stand. With China far ahead of India in military and economic clout, India has no option but to build ties to thwart Beijing’s unfettered rise. But this will not be at the cost of Russia.

The very fact that Prime Minister Modi went ahead with the S400 missile defence agreement with Russia, despite tremendous pressure from both the Trump and Biden administration is proof of that. India was well aware of the threat of sanctions hanging like a Damocles sword if it chooses to do the $5-billion defence purchase. But the government refused to call it off, placing the ball entirely in the US court. What finally happens depends on the US Congress.

India and Russia's ties went through a patchy phase, mainly because of Moscow’s overtures to Pakistan triggered by the need to build fences with the Taliban. Delhi had steadfastly refused to engage the Taliban during the Hamid Karzai and Ashraf Ghani decades. But that had changed ever since the Taliban took control of Kabul. Now the situation in Afghanistan and the fear of radical groups setting up bases in the outlying provinces of the country is driving India and Russia to cooperate closely not just in Afghanistan but across Central Asian countries which are allied to Moscow. In August, after the Taliban took over, President Putin was on the phone with PM Modi to discuss Afghanistan. Both sides decided to have a panel to monitor developments in that country. Following the telephone conversation between the two leaders, Russia’s security chief Nikolay Patrushev was in Delhi for an exchange of views with Ajit Doval, India’s National Security Adviser. This was in September. Again earlier this month Patrushev was here when Doval called a meeting of NSAs of the region to discuss Afghanistan. China and Pakistan did not attend.

Afghanistan will be a major part of the conversation between Modi and Putin at the summit. For the first time on December 6, the defence and foreign ministers of the two countries will also hold discussions. India had the two plus two dialogue format first with the US. Apart from the regional security situation the bilateral talks will include talks on collaboration on defence equipment and ways to promote trade ties. Hectic preparations are on to finalise on setting up a manufacturing unit for the Kalashnikov assault rifles in Amethi as well as short defence missile systems. Russia is now hoping to further cement its defence ties with India with an eye to competition from the US and its allies.

The weakest link in the India-Russia ties is private business. India-Russia economic ties are mainly driven by both governments and that has not changed through the years. India is eyeing Russia’s the Far East, with Prime Minister Modi visiting Vladivostok in 2019 for the annual summit and announcing a one-billion credit line for the development of the region.