Two interesting features that stand out in PM Modi's visit are: first, a new approach to India-Russia relations through the Indo-Pacific, and second, reinvigorating a time-honored bond with Russia. 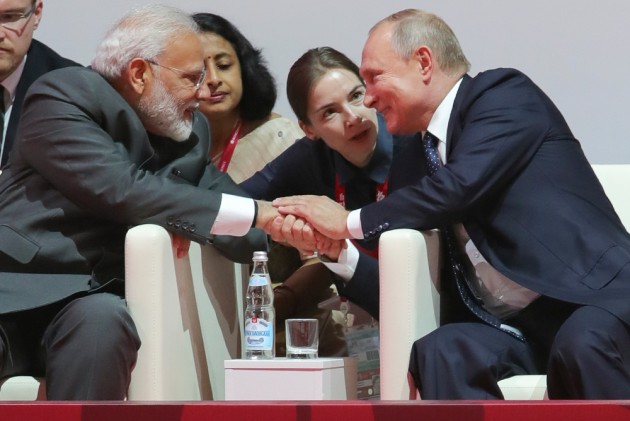 Early this month, Prime Minister Narendra Modi visited Vladivostok in Russia as the Chief Guest for the Fifth Eastern Economic Forum and participated in the 20th India-Russia Annual Summit. This is the first visit by an Indian Premier to Russia’s Far East Region, that shares land borders with China, Mongolia, North Korea and a maritime boundary with Japan.

Two interesting features that stand out in this visit are: first, a new approach to India-Russia relations through the Indo-Pacific, and second, reinvigorating a time-honored bond with Russia.

In Vladivostok, PM Modi said: "We are starting a new era of cooperation in the Indo-Pacific region," and announced a credit line of $1 billion for the development of the region. The two countries agreed to set-up a sea link between Vladivostok, the capital of Russian Far East, and Chennai.

The new sea-link not only reduces the sea transit time to Russia significantly, it also connects the two countries through the Malacca Strait and South China Sea, thereby getting Russia into India’s frame of ‘Indo-Pacific’ and ‘Act East’.

The 20th India-Russia Annual Summit came at a time when there was a rising notion that Russia was drifting away from India. Given India’s security challenges, this is an understandable concern arising from Russia’s deepening ties with China and Pakistan. Russia’s military exercises with Pakistan since 2016, Military-Technical Cooperation Agreement signed in 2017, and the Naval cooperation agreement signed in 2018, have raised hackles in India.

Between 2014 and 2018, Russia became the third largest conventional arms supplier to Pakistan, accounting for six per cent of Pakistan’s arms import. Pakistan has exploited its linkages with Taliban to remain relevant to the conflicting interests of Russia, China and USA, in the future of Afghanistan.

The erstwhile Soviet Union’s support for India during the 1971 war with Pakistan and the repeated veto in favour of India at the UN Security Council, provide the backdrop for the strong foundation of trust in the India-Russia relationship.

However, that special and privileged strategic partnership appeared to face rough weather in the shifting winds of global power, until PM Modi and President Putin held the Sochi ‘agenda-less’ talks in May 2018.

India’s broader strategy of global power balancing became apparent from PM Modi’s speech at the Shangri-La Dialogue in Singapore in June last year, where he emphasised the importance of India’s relations with Russia, China and the US and said, “Ten days ago in an informal summit at Sochi, President Putin and I shared our views on the need for a strong multi-polar world order for dealing with the challenges of our times.”

This fine balancing is essential for a growing India for multiple reasons. From a security perspective, almost 60 per cent of India’s military inventory is of Russian origin. India’s defence preparedness is affected by the US decision to link its sanctions on Russia and Iran with India. Countering America’s Adversaries through Sanctions Act (CAATSA) that gained prominence in India due to its potential to impact import of the Russian S-400 anti-missile defence system is a case in point.

Incidentally, the original equipment manufacturers of the MiG and Sukhoi aircraft used extensively by Indian Air Force are in Irkutsk in Russian Fareast Region. In 2018, India signed the contract for supply of S400 missile defense system and four frigates; in 2019, the deal was done for a nuclear submarine to replace INS Chakra, followed by sanction for buying 464 T-90 tanks and inauguration of India Russia Rifles Pvt Ltd, a joint venture to manufacture AK-203 rifles in India.

The 20th India Russia Summit concluded with 25 agreements covering the entire gamut of space, energy, trade, education, culture, connectivity corridors etc. Agreement to cooperate in the field of emerging technologies and upgrading defense cooperation by promoting joint development and manufacturing of military equipment, components and spare parts, in partnership with Indian industry, would not only help in reducing India’s import dependency but also develop its export potential.

The provision of mutual support in logistics and services amongst the Armed Forces of the two countries can be mutually beneficial. The speed and sustainability of the outcomes will determine the value of the agreements.

The joint statement issued post the 20th Summit is indeed telling when it states, “India-Russia ties have successfully coped with the turbulent realities of the contemporary world.” Clearly getting Russia into the Indo-Pacific frame of India is a sophisticated balancing act.

Russia’s strong support for India’s membership of the Nuclear Suppliers Group and candidacy for the permanent membership of a reformed UN Security Council can further strengthen this time-tested bond.