At a time when Narendra Modi and Mamata Banerjee are going at each other's jugular, the Bengal Chief Minister's policy of showering BJP top leaders with gifts may anger Muslim voters so crucial to Didi's political survival 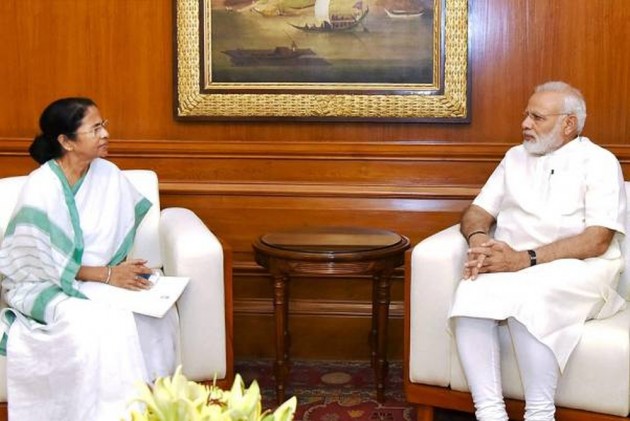 Prime Minister Narendra Modi’s allusion to the special gifts sent to him by West Bengal chief minister Mamata Banerjee every year is potent with political symbolism. The revelation made in this sly innuendo definitely is an attempt to queer Mamata’s position vis-a-vis the Muslim voters in Bengal. Modi has simply mentioned the fact that Mamata has been sending him sweets every year, thereby hinting at a possible steady relationship she had been maintaining with him, notwithstanding the anti-Modi rhetoric she is using to mobilise people around her.

It is indeed a fact that Mamata Banerjee sends gifts to prominent political leaders across the spectrum in Delhi and other regions. Besides sweets, West Bengal’s famous textile products, boxes of mangoes occupy a prominent place. The so-called mango diplomacy was first introduced by late Congress leader A B A Ghani Khan Choudhury. He had started this by sending boxes of Kohitur mangoes to Rajiv Gandhi, Jyoti Basu and other senior leaders.

When Mamata was a part of NDA in 1999-2004, she started sending mangoes, sweets and cotton sarees to A B Vajpayee, L K Advani, Rajnath Singh and other leaders. Even though she had snapped her relation with Congress in 1998, she maintained a good relation with Sonia Gandhi and Pranab Mukherjee and continued to send them gifts. Later on, when Narendra Modi came to power, he and Amit Shah were also included in that list. Having consolidated her power in West Bengal, she started showing more interest in spreading her wings in the national arena. Accordingly, her mangoes and sweets started arriving at residences of Andhra Pradesh CM Chandrababu Naidu, Bihar’s Nitish Kumar, Karnataka’s H D Kumaraswamy, Delhi’s Arvind Kejriwal and other regional satraps.

Blog | Modi The Man, Made For The Camera

PM Narendra Modi's Interview To Akshay Kumar: Why Mamata Banerjee Is Not An 'Enemy'

In a parliamentary democratic system, a gift sent to a political adversary celebrating a festive occasion is expected to be seen as a courteous gesture only and no political meaning should be attached to that. However, the realpolitik would not afford to have that luxury. Especially, when a state where around 30% voters are Muslim and Modi-bashing is potent with rich dividend in terms of votes, an astute politician like Mamata Banerjee had to keep her mangoes and sweets diplomacy with Narendra Modi a closely guarded secret.

Conversely, Modi’s casual mention about the same is an attempt to sow doubt in the minds of Mamata’s Muslim voters about her political steadfastness. Does this sweet and mango diplomacy hint at a future where Mamata Banerjee and Narendra Modi would come close to share power? It is unlikely, as she had found in her past association with the BJP in 1999-2004.

It is politically wise for her to maintain a distance from Hindu Right politicians and make it ostensible. However, both Modi and Mamata need each other. While pandering to their respective vote banks with rhetoric, they also need to negotiate on various issues: Modi wants Mamata on his side on the issue of water sharing with Bangladesh, and Mamata’s interest lying on keeping the ongoing CBI investigation into various scams in the state under check. The sweets and mangoes can only prepare the ground for that.