Alongside unveiling other projects, PM Modi laid the foundation stone of the of the ‘Banas Dairy Sankul’, a dairy project covering an area of 30 acres and built at a cost of about Rs 475 crore which is likely to process about 5 lakh litre milk per day. 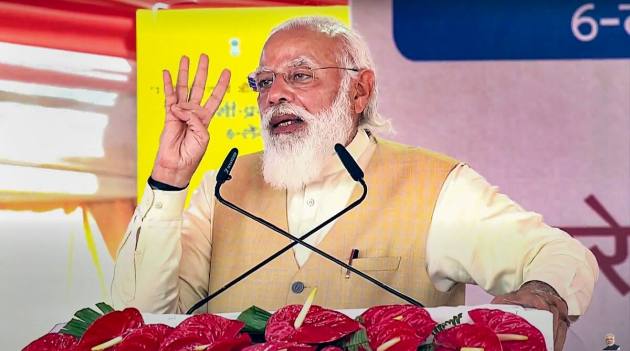 Ahead of the Uttar Pradesh assembly elections 2022, Prime Minister Narendra Modi on Thursday laid the foundation stones of 27 development projects worth Rs 2,095 crore in his Varanasi parliamentary constituency.

This is Modi's second visit to the holy city within 10 days.

After arriving in the morning on Thursday, he laid the foundation stone of the ‘Banas Dairy Sankul’ at the Uttar Pradesh State Industrial Development Authority Food Park, Karkhiyaon.

Spread across 30 acres, the dairy will be built at a cost of about Rs 475 crore and would process about 5 lakh litre milk per day, according to officials.

This will strengthen the rural economy and help the farmers of the region by creating new opportunities for them, they said.

The prime minister also digitally transferred a bonus of about Rs 35 crore to the bank accounts of more than 1.7 lakh milk producers associated with the Banas Dairy. He also laid the foundation stone for a biogas-based electricity generation plant for a Milk Producers' Cooperative Union plant in Varanasi's Ramnagar.

Modi also launched a portal and a logo dedicated to the Conformity Assessment Scheme of milk products developed by the Bureau of Indian Standards (BIS) with the help of the National Dairy Development Board (NDDB).

The unified logo, featuring both the BIS logo and the NDDB quality mark, will simplify the certification process for the dairy sector and reassure the public about dairy product quality.

In another effort to reduce the number of land ownership issues at the grassroots level, the prime minister virtually distributed the rural residential rights record, "Gharauni", under the Swamitva scheme of the Union Ministry of Panchayati Raj to over 20 lakh residents of the state.

The prime minister also inaugurated multiple urban development projects, including six for the redevelopment of Old Kashi wards, a parking-and-surface park at Beniabag, beautification of two ponds, a sewage treatment plant in Ramna village and the provisioning of advanced surveillance cameras at 720 locations under the Smart City Mission.

Projects in the education sector inaugurated by the prime minister include the Union Education Ministry's Inter University Centre for Teachers Education, built at a cost of around Rs 107 crore, and a teachers' education centre at the Central Institute of Higher Tibetan Studies, built at a cost of over Rs 7 crore.

Further, residential flats and staff quarters at the Banaras Hindu University (BHU) and the ITI, Karaundi were also inaugurated by the prime minister.

He also inaugurated a project comprising a doctors' hostel, a nurses' hostel and a shelter home, built at Rs 130 crore, at the Mahamana Pandit Madan Mohan Malviya Cancer Centre, a 50-bed Integrated Ayush Hospital at Bhadrasi.

The prime minister laid the foundation stone of the Rs 49 crore Government Homeopathic Medical College in Pindra tehsil under the Ayush Mission.

In the road sector, Modi laid the foundation stone for widening four-lane roads to six lanes for Prayagraj and Bhadohi. This will improve the connectivity of Varanasi and will be a step towards resolving the problem of the city's traffic congestion.

To give a fillip to the tourism potential of the holy city, the prime minister inaugurated the first phase of the tourism development project related to the Shri Guru Ravidas Ji Temple, Seer Govardhan, Varanasi.

Other projects inaugurated by the prime minister include a speed breeding facility at the International Rice Research Institute, the South Asia Regional Centre, Varanasi, a regional reference standards laboratory in Payakpur village and an advocate building in Pindra tehsil.

The prime minister was here December 13 too when he inaugurated the Kashi Vishwanath Corridor.

He had also attended the conclave of chief ministers the next day. The prime Minister inaugurated the All India Mayors' Conference held here on December 17 via video conferencing in the pilgrim city.