In His First Press Conference, PM Modi Says India Has Made Up Its Mind To Bring Back BJP To Power

The Prime Minister attacks Congress, saying there was a time when IPL and elections couldn't be held simultaneously; redirects all questions to Amit Shah, saying, "everything is the party president in BJP." 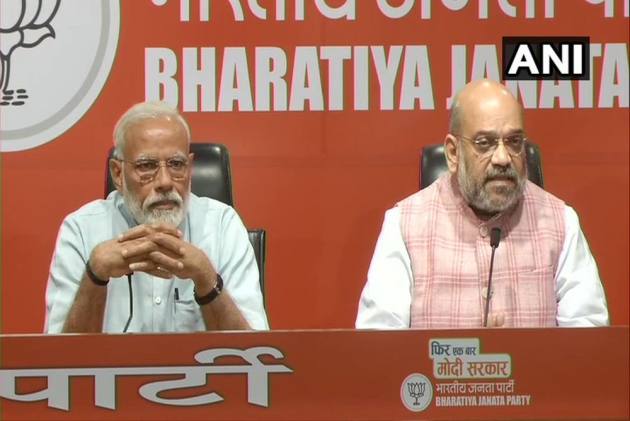 Prime Minister Narendra Modi sounded confident on Friday that a government with full majority will return to power at the Centre when the Lok Sabha poll results are declared on May 23. "It has not happened often in our country that a government with full majority returns with a majority," Modi said at a press conference, his first since coming to power in 2014, at the BJP headquarters in Delhi.

Launching an attack on the Congress-led UPA, he said there was a time when the Indian Premier League (IPL) and elections couldn't be held simultaneously, but the situation has changed today. "The IPL, Ramadan and elections were all held at the same time this time around," he said.

Modi added that after a long time in the country, our government will come to power with an absolute majority for the second consecutive time.

He, however, did not take questions, saying "In BJP, everything is the party president."

Amit Shah, who was also present at the press conference, said, "We started our election campaign from January 16... Our target was to win 120 Lok Sabha seats which we couldn't win the last time. We are confident that we'll receive good results."

When asked about party's stand on Pragya Singh Thakur's comment that Nathuram Godse was a true "deshbhakt" or patriot, Shah said the party has issued her a show-cause notice and asked her to reply within 10 days. "Party's disciplinary committee will take appropriate action after she files her reply," he said. Shah, however, defended the party's decision to field her from Bhopal as the BJP candidate against Congress leader Digvijaya Singh.

Earlier in the day, Modi had said that he will never be able to forgive Pragya for her remarks.

"Narendra Modi has been accepted by the people, I guarantee you that BJP, under Narendra Modi's leadership, is going to form the next government. People have been ahead of us in their determination to form a Modi government once again," Shah said.

He said this will be the first time that a non-Congress government with a single party majority will come back to power on the basis of its performance.

"We will get more than 300 seats along with our pre-poll allies. We will have the government. It'll be a coalition government," he said in response to questions.

Asked about taking the help of new parties, he said, "We are open to having anybody who will accept our agenda."

He dismissed the possibility of Opposition alliances gaining seats saying, "if two leaders form alliances in AC rooms in Delhi, it doesn't mean that people will follow them like bonded labour."

Replying to a question on Congress chief Rahul Gandhi saying that Modi did not join the debate with him on the Rafale issue, Shah said, "Rahul Gandhi should go to the Supreme Court with whatever material he has. There was no compromise on the deal and no favouritism was done. Not a paisa was involved in any corruption."

Recalling various schemes launched by the NDA government in the last five years, Shah said that the central government has ensured that 'vikas' (development) reached the lowest section of society through its schemes.

"There's a Modi wave in the country which will re-elect Prime Minister Narendra Modi again. In the whole world, India is recognised as a powerful country. Since Independence, these elections have been the biggest for BJP," he said.

Shah went on to add that BJP started its election campaigning from January 16 in a bid to win the 120 Lok Sabha seats it lost in the previous elections. "We are confident that we will receive good results. We will get more seats in West Bengal, Odisha and even in Karnataka," he added.

Seven-phase Lok Sabha elections, which began on April 11, will conclude on May 19. Results of the electoral exercise will be out on May 23.