So far 16 people have died, of which 14 were due to bullet injuries, in protest related violence in Uttar Pradesh with all of the victims being Muslims. 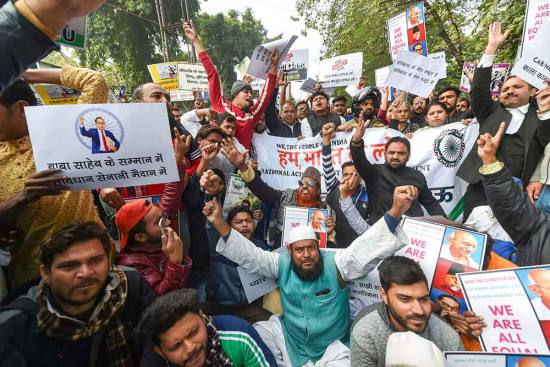 The protests against Citizenship Amendment Act (CAA) in Uttar Pradesh last week were met with strong police action, with some alleging the action taking the form of excesses. Large groups have been protesting in several parts of the country against the Act, which they feel is discriminatory as it grants citizenship to only non-Muslim minorities from Pakistan, Bangladesh and Afghanistan.

So far 16 people have died, of which 14 were due to bullet injuries, in protest related violence in Uttar Pradesh with all of the victims being Muslims. The state police also arrested 879 people and detained over 5,000 people until Monday. The populous northern state has a significant Muslim population (19.3%) and saw major protests on Friday, days after the bill was passed in Rajya Sabha and anti-CAA protests turned violent in Delhi’s Jamia Millia Islamia.

UP police chief on Saturday had said that not a single bullet was fired by the police in the crack down on protesters and the deaths happened due to firing among the protesters. However, the Bijnor SP on Monday admitted to The Indian Express that a protester was killed in police firing after the ballistic report confirmed that bullet came from the service pistol of a constable. In districts where the deaths have happened, the local accounts say that protesters have died due to police firing while the police remain firm in denial.

UP: IAS Aspirant Among Those Killed In Alleged Firing During CAA Protests

Consider Muzaffarnagar for instance. The district’s SP (city) Satpal Antil told Outlook that Muslims started gathering at Meenakshi Chowk and Sarwat Road area after Friday prayer. “We kept telling them to go back and not violate the Section 144 (prohibiting assembly of five or more people) that had been imposed but they did not heed. Then they started vandalizing property, arson, stone-pelting and firing. We gave them lot of warnings, but they did not listen and we had to ultimately lathi-charge them,” says Antil, adding that several policemen were also injured in the incident.

He confirmed the death of one protester, Noor Mohammed (26), and said that he died due to firing among protesters. But the locals have a starkly different version of the events.

“People were marching in protest against the CAA on Friday. Then from one side ruling party’s members and supporters came firing towards the protesters. They were accompanied by the police that came down heavily on the protesters. One protester was killed but the police is bent on proving that he died in firing amongst the protesters,” says Salman Sayeed, a Congress leader in Muzaffarnagar.

Sayeed adds that four cars and one auto parked in the compound of his house were burnt down by the same unruly crowd that attacked the protesters. “Two of them were my cars. The crowd set them on fire saying ‘Burn down Salman’s cars,’” adds Sayeed, who is also a member of the All India Congress Committee.

Another local resident requesting anonymity said that the protest march met with the convoy of local MP Sanjeev Balyan and a minister in the Union government. “He instigated the police to chase away the protesters. ‘Ye bheed kaisi hai, hatao isey. Choodiyan pehen rakhi hain kya tum logon ne?’ (Disperse this crowd. Are you not capable?) he told the police following which the police attacked the protesters. Some of the protesters pelted stones at the police too,” he says.

He adds that the police entered Saadat Hostel compound – it hosts a school, a hostel and a mosque – ransacked it, beat the students and even assaulted the aged imam, who suffered a shoulder fracture. In addition, the police barged into homes of Khalapar area and broke everything. “They took away Rs 3.25 lakh cash from one house and 200 gram of gold from another. The latter had kept it for their daughter’s marriage. Besides police and security forces, there were people in civilian clothes too,” the resident adds.

Nakul Singh Sawhney, who runs a media collective by the name Chal Chitra Abhiyaan in the Muzaffarnagar region, says that one of the houses he visited was totally ravaged. “The police have targeted the socially-active and well-to-do ones. Because they are the people who intervene for others,” says Sawhney.

The SP (city) says the claims of police vandalizing homes is ‘total rubbish’. However, The Quint has accessed CCTV footages in the Khalapar area which shows the police doing vandalism and even breaking CCTV cameras.

In Kanpur too, three deaths occurred in the violence that ensued during the protests. Lawyer Taufeeq Ahmad, a resident of Kanpur, says that three were killed in direct firing by the police but the police is refusing to own up. After the deaths, the protesters also torched a police check post. Kanpur SSP was unreachable for comment despite repeated attempts.

The reports of houses being ransacked by police have come from Bijnor, state capital Lucknow and other districts too. Several videos have also emerged showing policemen breaking vehicles and damaging property.

Commenting on the reports, AL Banerjee, former UP DGP said that the whole episode provides a great learning curve for the police. “We could have been better prepared and our response could have been more structured and more measured. We could have used water cannons. I think we all need to put our heads together and figure out ways and means of permitting protests and not letting them become violent,” says Banerjee.