They marched from Mandi House to HRD Ministry, where a student-delegation met the officials following which the group decided to carry on the march to the President's office. 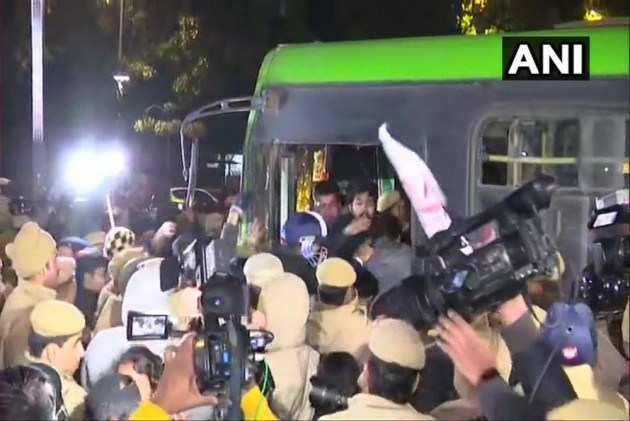 The students of Jawaharlal Nehru University (JNU) were stopped by police from marching towards the Rashtrapati Bhawan on Thursday, protesting against the January 5 violence on campus and demanding the removal of varsity VC Jagadesh Kumar.

They marched from Mandi House to HRD Ministry, where a student-delegation met the officials following which the group decided to carry on the march to the President's office. It's learnt that JNU Students' Union president Aishe Ghosh gave a call to carry forward the march after students' demands were not accepted by the government.

The police appealed to students to maintain peace and end their protest. Ghosh said the students and faculty will not relent till vice-chancellor M Jagadesh Kumar is sacked.

She made the comments after meeting HRD officials on Thursday.

Ghosh said they appealed to HRD ministry to remove the VC, which in turn said the dialogue will be held on Friday.

"We will not compromise with HRD ministry over the removal of the VC. It is still thinking whether the VC should be removed," he said.

Meanwhile, the HRD Ministry said the removal of Kumar was not a solution.

HRD Secretary Amit Khare said officials of the ministry will talk to Kumar again on Friday over the students' claims of the revised fee not being implemented.

"The removal of the vice chancellor is not a solution," he said, adding the ministry officials will also meet JNU Students' Union after meeting Kumar.

"I have also offered the students to meet them again tomorrow regarding their demands. Such incidents should not re-occur," he said.