Mamata’s continuing tirade against Modi and her effort to bring the opposition together on the singular issue of ‘Oust Modi’ in the coming elections has already started showing some results. 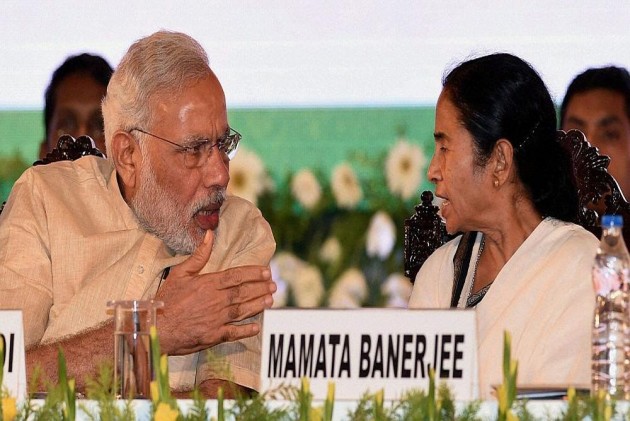 An ugly tussle between the Central Bureau of Investigation (CBI) and the state police in Kolkata has blown into a full-fledged war between the Centre and the state, with Chief Minister Mamata Banerjee calling the CBI move to gatecrash into Kolkata police commissioner's official residence as an act worst than Emergency days. The Sunday evening drama began in front of commissioner Rajiv Kumar’s residence as the first batch of CBI officers reached there and tried to enter the house. The state police obstructed their path and later more police came in and took the CBI officers forcibly to the nearby police station. The climax of the drama saw the Chief Minister arriving at the scene with some senior police officers, and a huge posse of state police surrounding various CBI offices in the city restricting the movement of the other CBI officers. Later, Central paramilitary forces were deployed by the Union Home Ministry to give protection to the CBI officers and their offices. Meanwhile, those CBI officers who were detained by the state police were released. Mamata Banerjee took to street agitation against the Modi government accusing it of destroying the constitution.

As both parties have approached the Supreme Court, the battle line is drawn. It has opened two fronts: the legal and the political. On Tuesday, the Supreme Court ordered the police commissioner to "faithfully" cooperate with the CBI even as it said that he can not be arrested by the agency. Mamata was quick to call the apex court's order a "victory of democracy". While nothing could be said with certainty about the ultimate outcome of the legal battle, the political consequences of this conflict could be predicted almost with certainty. By levelling allegation against the Prime Minister Narendra Modi-led Central government of unleashing an attack on the state and infringing upon the constitutional propriety, Mamata has successfully turned on the heat on the BJP. Brushing aside all the charges against her party leaders’ involvement in the chit fund scams, Mamata painted the CBI moves as an act of political vendetta. She claimed that Modi had panicked after seeing the entire opposition come together in her successful Brigade rally on January 19 and that the latest CBI moves were nothing but a knee-jerk reaction to that.

Ever since the CBI has been entrusted with the task of investigating Saradha, Rose Valley and other chit fund scams it has been dragging its feet. Despite arresting a number of chit fund company owners and some political leaders, CBI could not complete the investigation and file charge sheet against them. The scam first broke out in 2013 and the CBI was given charge of the investigation in 2014. But in the public perception, the CBI’s role in this investigation of ponzi schemes left much to be desired. In the early stage of the investigation, it realised that the state’s SIT led by Rajiv Kumar has been withholding a number of documents that could be used as material evidence in the case. Also, they learnt that some documents have definite information on the nexus between politicians and scamsters. But besides sending some requests to the Bengal government and Kolkata police commissioner, it did nothing. Only in late 2018, it went to court complaining against Kumar for not cooperating with the investigation.

CBI Vs Mamata: High Voltage Drama, Nothing But Political Manoeuvring

Now, as the 2019 general election is just a few months away, the CBI’s overdrive is viewed with suspicion. Mamata cleverly questioned the timing of the CBI move and linked it with BJP’s political agenda. Her task was made easier by no other person than her bête noir Narendra Modi. During his less than five year rule at the Centre, Modi has been steadily undermining almost all the constitutional bodies and institutions. Reserve Bank of India, Central Vigilance Commission, CBI and many others have experienced unprecedented interventions by the Modi government. Thus, after going into hibernation, when all of a sudden the CBI became overactive in the ponzi scheme scam before the elections, it became easier for Mamata to label it as an act of political vendetta.

In fact, for both Mamata and Modi, they have little options before them but to take the extreme steps they took on this issue. Modi’s dictatorial approach to governance and total lack of respect to the constitution, parliamentary democracy and rule of the law, has already created a great divide in the political space in the country. Mamata’s continuing tirade against Modi and her effort to bring the opposition together on the singular issue of ‘Oust Modi’ in the coming elections has already started showing some results.

The latest electoral defeat faced by BJP in three major states in Hindi heartland and Mayawati and Akhilesh Yadav's coming together to fight against BJP in Uttar Pradesh has raised the alarm for the BJP leadership. Thus, it was politically prudent to attack one of the major architects of the opposition unity. But, the desperation in the BJP camp was evident as they, instead of waging political battle, resorted to make ‘’use’’ of CBI to do their political job. Even if the CBI is able to prove the corruption charges that they want to nail the TMC leadership with, the people of Bengal might take it with a pinch of salt and give more credence to Mamata’s theory of ‘’political vendetta’’. As a result of that, the image of victimhood might help Mamata sail through the elections with flying colours. Hence, even if Modi scores a point or two by nailing some TMC leaders and police officers in the scam, Mamata will definitely gain politically.