The Delhi Disaster Management Authority on Sunday issued a fresh set of guidelines, including strict adherence to COVID-19 safety protocols, for holding congregations and large events ahead of Durga Puja and Ramlila celebrations. 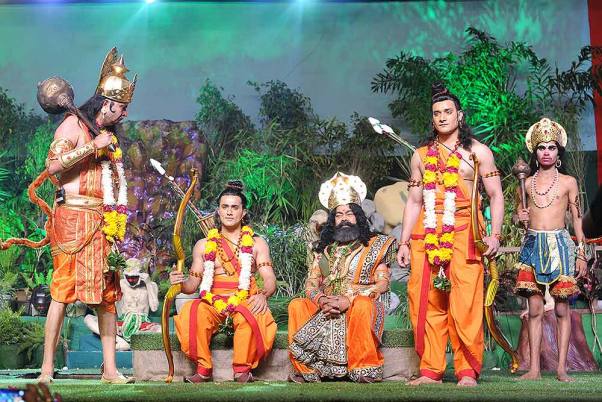 Various committees organizing huge Ramlila celebrations across Delhi, including at Red Fort grounds, have decided to "not hold the event" this year as the situation is not feasible and there are "too many restrictions" in the fresh guidelines issued for holding events, an official of their umbrella body said on Monday.

"We begin our preparations at least two months in advance. Dusshera is on October 25 and DDMA authorities issued fresh guidelines yesterday. Earlier, they couldn't do due to rising number of cases.

"But, it is not possible to make arrangements at the last moment, so we have decided to not hold it this year," said Arjun Kumar of Lav Kush Ramlila Committee, which has been organizing the event at the Red Fort front lawns for over 40 years.

Kumar, also the general secretary of Delhi Shri Ramlila Mahasangh, which is an umbrella body of various Ramlila organizing committees in Delhi, said, "Today, we had a talk with representatives of other major organizing committees, and we all have decided not to hold the events this year as the situation is neither conducive nor feasible to execute the plan now".

He claimed that there are about 800 big and small organizing committees in Delhi and even the "smaller ones have decided against it".

The Delhi Disaster Management Authority on Sunday issued a fresh set of guidelines, including strict adherence to COVID-19 safety protocols, for holding congregations and large events ahead of Durga Puja and Ramlila celebrations.

In an order, Delhi Chief Secretary and Chairman of DDMA's state executive committee Vijay Dev said all event organizers will have to obtain requisite permission from concerned district magistrates for organizing the events besides obtaining permission from other authorities as per applicable laws and rules.

It may be noted that the restriction on gatherings and large congregations imposed by the DDMA order on September 30, stands withdrawn to the extent of allowing gatherings and congregations for the celebration of upcoming festivals till October 31 only, said the order.

Ravi Jain of Shri Dharmik Ramlila Committee, which was established in 1924, said, new guidelines have been issued "at the last moment" and that too with too much restrictions.

"If anyone is found standing or sitting, then it won't be allowed. How do we know, what people will do, we can only ask then to follow the guidelines. Also, permissions needed at so many levels, from police to MCD, it is not feasible to hold Ramlila now, in such a short period of time," he said.

"Our application is still pending, and now more restrictions. Plus, fairs, 'melas', food stalls, and swings are not allowed. It is just not feasible for us to hold it," he added.

He said after the ASI nod, tents are pitched two months before, and 'bhoomipujan' happens 30 days before, neither of that has happened and it's already mid-October.

"Also, half of our artistes come from Mumbai, we have to make arrangements for their stay and travel. Now, it is so difficult to manage with such little time left," Kumar said.

The Lav Kush Ramlila Committee's representative also said experts have said that COVID-19 cases might flare up here due to large gatherings during upcoming festive seasons.

"We don't want to put anyone's safety at risk, so in all ways situation not favorable to hold such events," he added.

The national capital recorded 29 COVID-19 fatalities on Sunday, taking the death toll to 5,769 while 2,780 fresh cases took the infection tally to over 3.09 lakh, authorities said.

On Saturday, 48 deaths were recorded. On September 29 as well, 48 fatalities were reported in the city, the highest number of deaths recorded in a day since July 16, when Delhi saw 58 fatalities.

Earlier in September, some of the Ramlila committees in the national capital had begun preparations for the 10-day celebrations ahead of the Dussehra festival but were unsure whether the government would allow the performances, which draw a large crowd, year after year.

They had, however, expressed concern that it will be difficult to maintain social distancing among actors and will be cumbersome for them to act wearing masks.

Many Ramlila committees had also planned to burn an effigy of coronavirus, along with the traditional effigies of Ravan, Kumbhakarna, and Meghnad.