Harish Salve was the lead counsel for India in the Jadhav case at the ICJ which had last year ruled that Pakistan must review the death sentence awarded to the retired naval officer. 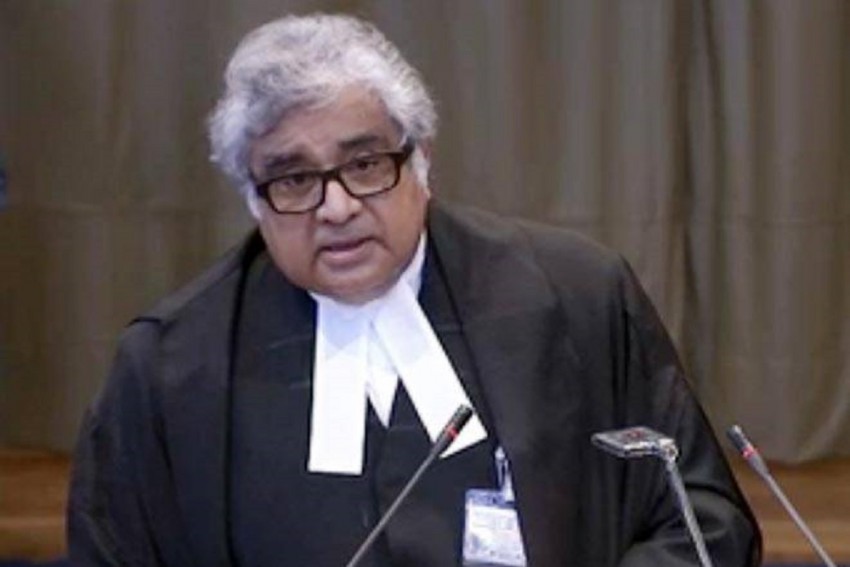 India had hoped it might be able to persuade Pakistan through "back channel" to release retired Indian Navy officer Kulbhushan Jadhav, who was sentenced to death by a Pakistan military court on charges of "espionage and terrorism" in 2017, senior advocate Harish Salve has said.

Salve was the lead counsel for India in the Jadhav case at the International Court of Justice (ICJ) which had last year ruled that Pakistan must review the death sentence awarded to the retired naval officer after a closed trial.

During an online lecture series organised by the Akhil Bharatiya Adhivakta Parishad, affiliated to the Rashtriya Swayamsevak Sangh (RSS) on Saturday, Salve from London said the Indian side has kept on asking how do Pakistan propose to carry out the ICJ judgement and give effective review and reconsideration, but no answer has been forthcoming.

"We were hoping that through back channel, we may be able to persuade Pakistan to let him go. If they want to say on humanitarian ground or whatever, we want him back. We said let him go. Because it has become a big ego problem in Pakistan. So, we were hoping that they will let him go. They haven't," he said, while answering a question on the current situation in the matter.

"We have written four-five letters. They just keep on denying," he said. "I think we have reached a point where we have to now decide whether we want to go back to ICJ for consequential directions because Pakistan has not moved ahead."

Salve said that following the ICJ order, Pakistan had granted consular access but it was too late and "we have now been in a tussle with Pakistan to get them to set up machinery."

"Pakistan believes, first of all they told the whole world they have won the case, good for them. And now, they keep saying that you have to file a proceeding in a Pakistani court or take Pakistani proceedings," he said.

"We keep saying how you propose to carry out the judgement of ICJ and give effective review and reconsideration. They refuse to answer that question. We have had exchanges backward and forward. I think the Government of India has been writing to them and who knows the way things are going, we may have to go back in the ICJ someday, trying to get justice for Jadhav," Salve said.

He said till date, Pakistan has refused to share the case details such as the FIR, the chargesheet or the judgement of the military court in the matter.

Responding to a question about the alleged offensive languages used by lawyer representing Pakistan at the ICJ, Salve said the Pakistan's lawyer had used very "strong language" against India.

"In the ICJ, we never used words like these. I did the word check and worlds like disgusting, lying and dishonest have been used by Pakistan many times," he said.

Salve said that he did not want to stoop to the Pakistan's level as Indian traditions did not allow him to use such bad words and, moreover, he respected the ICJ and its portal.

Salve then referred to a statement of a registrar of the ICJ made to the Indian ambassador during a function.

"He (registrar) said that there was so much heat in this case." Salve recalled, adding that he said that the America-Iran sanction case was important one, but that was done peacefully.

Sharing the experience about the hearing in the Jadhav case, he said that by the time of rejoinder argument, the Pakistan lawyer was apologetic for the language used.

“We are keeping this case under the glare of the international community in the hope that Pakistan does not do what it does,” he said in response to a question as to how to save Jadhav from the fate meted out to Sarabjit Singh in a Pakistan jail.

Sarabjit, who was convicted for alleged involvement in bomb attacks in Pakistan's Punjab province in 1990, was brutally attacked by inmates in the Kot Lakhpat Jail and had died in a hospital in the country.

Salve, while addressing the lawyers, gave the background of Jadhav’s case and said he is the ex-navy commander and his case is that he carries out business in Iran and one day he was kidnapped.

“Their case generally is that they caught him trying to infiltrate Pakistan at the Pakistan-Iran border at the place called Chhabahar. That’s where they caught him,” he said.

Salve added that before Pakistan informed India about Jadhav’s arrest, they had made his confession global.

“The confession makes an interesting reading. It is a very general kind of confession saying that I have been a bad boy. I have indulged in terrorism activities in this place and that place and on behalf of India. I have done lot of bad things in Pakistan. No details, no dates, no incidents mentioned, no specific incidents mentioned. They claim that on basis of this, he was then sent to trial, he was given an Army officer, as a lawyer to represent him. They claim he was tried,” he said.

Pakistan has claimed that Jadhav was arrested on March 3, 2016 and India was informed on March 25, 2016, when its Foreign Secretary raised the matter with the Indian consulate in Islamabad.

Jadhav was sentenced to death on charges of espionage and terrorism in April 2017 by the Army court.

India had moved the ICJ against the Pakistan Army court.