A perception is being manufactured that Muslims, especially Kashmiri Muslims, are settling down in Jammu city under an ‘Islamist’ plan to change the demography of the region and "encircle" the city. Some groups have been consistently fanning such perception. 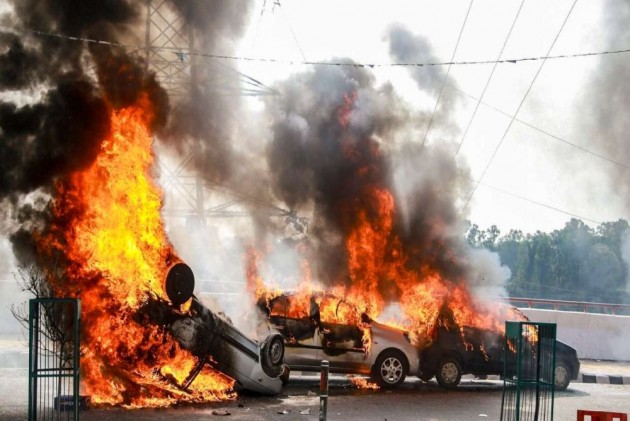 Jammu continued to remain on edge Saturday, two days after the Pulwama terror attack in which 40 CRPF personnel were killed. Strict curfew restrictions have been imposed in Jammu district following incidents of stone-pelting on Friday in areas where Kashmiri Muslims stay during winters.

About 12 persons received minor injuries and about a dozen vehicles, almost all bearing Srinagar registration numbers, were torched by protesters.

Concertina wires have been put up in the entire city and mobile internet services suspended.

Jammu has consistently run a counter-narrative to the Kashmir valley by strongly desisting and condemning separatism and terrorism.

Protests and bandhs have always been observed in Jammu after any major terrorist attack in the valley.  However, the scale of violence this time, and that too specifically targeting minority (Muslim) pocket areas was not witnessed even during the 2008 Amarnath land row when the two regions were highly polarised, and not even during the protests post the 2016 Uri terror attack.

"We strongly condemn the attacks. Jammu is a city of communal harmony but some elements for some time are trying to vitiate the atmosphere. The violence on Friday suggests that the administration had given a free hand to hooligans, which never happened in the past," Advocate Sheikh Shakeel told Outlook.

Incidentally, Sheikh Shakeel was part of the Amarnath Sangharsh Samiti which spearheaded the around three-month-long agitation in Jammu in 2008 for giving forest land to the Shri Amarnath Shrine Board to set up temporary facilities for Hindu pilgrims.

Since 2008 things have changed in both regions of Jammu and Kashmir.  While radicalisation has been growing in the valley, some forces are whipping up ‘Hindutva'  in Jammu region, especially in and around Jammu city, which has grown substantially.

In the last 15 years, many families from across the state, mostly Muslims from Kashmir, Kargil and Muslim-majority districts of Jammu, have settled down in and around the city for a host of reasons, primarily peace and education of their children.

A perception is being manufactured that Muslims, especially Kashmiri Muslims, are settling down in Jammu city under an ‘Islamist’ plan to change the demography of the region and "encircle" the city.  Some groups have been consistently fanning such perception.

Things changed significantly last year when a tribal a Muslim girl was raped and murdered in Kathua.  Kashmiri politicians and the media made it a case of Muslims being persecuted by Hindus in Jammu. For the first time, the Jammu Bar Association got divided along religious lines over the issue.  The categorical refusal of then Chief Minister Mehbooba Mufti to hand over the case to the Central Bureau of Investigation (CBI), as demanded by the Hindus, was seen as acting against Hindus.

A newly-formed organization, IkkJut Jammu, supported by members of Kashmiri Pandits who still nurse a feeling of 'victimhood', started a slander campaign against Mehbooba Mufti accusing her of being 'pro-separatist', 'pro-Pakistan' and pursuing an ‘Islamic’ agenda.

Last month, Mehbooba Mufti said Jammu Muslims are being victimised and specifically named IkkJut Jammu as some of the fanatic groups harassing them.

Till now this group was a political non-entity but Mehbooba with this statement gave it political legitimacy.

Muslims in Jammu region, more so in Jammu district and around, have consistently rejected separatism. Terrorism is almost non-existent in the entire region.

However, such statements by the Kashmir-based leadership, albeit for political consideration, and the killings at such a scale (Pulwama) have ramifications in heterogeneous Jammu than homogenous Kashmir region.

Since Partition, there has not been a single Hindu-Muslim riot in Jammu city which has become a melting pot of all regions, religions and communities of the state.

Friday’s violence has shed light on the now boiling pot.