After Sachin Pilot’s return and the end of month-long political crisis, the biggest challenge for Rajasthan Congress is to revamp the organisational structure and to accommodate loyalists from both Ashok Gehlot and Pilot camps. 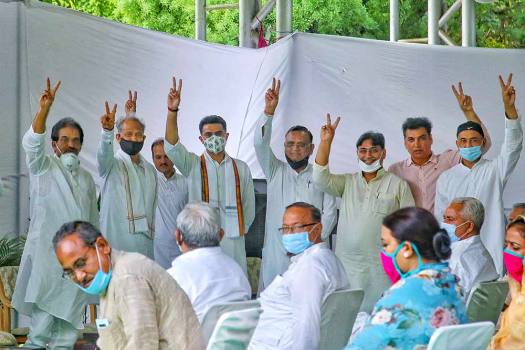 After a month-long political crisis in Rajasthan came to an end, the newly appointed Rajasthan Pradesh Congress Committee president Govind Singh Dotasara has said the party has left the past grudges behind and is all set to strengthen its organisation with a blend of youth and experience.

Speaking about the present organisational structure, Dotasara told Outlook,"We are trying to rejuvenate the party and strengthen it at the grassroots. The idea is to accommodate youth and experience together. The newly appointed head of NSUI, Youth Congress, Sewa Dal and Mahila congress are young leaders from the state. The vacant posts will also be filled soon."

Dotasara, who also holds the post of Education Minister, was made PCC chief last month after Congress leader Sachin Pilot was removed from the post. Following Pilot's unceremonial removal from the post, the Congress dissolved all committees and executive bodies. So far, only the presidents have been appointed but the posts of office bearers are lying vacant.

Moreover, the former Youth Congress President, Mukesh Bhakar and Sewa Dal President Rakesh Pareek, who are sitting Congress MLAs, are strong Pillot supporters. Registering the anger over removal of Pilot, many district-level Congress presidents also tendered their resignations. Interestingly, after Pilot returned to Jaipur along with his 18 loyalist MLAs, his supporters in the party, who have been sidelined after the committees were dissolved, have regained the hope to get accomodated once again.

The biggest challenge in front of the party president, who happens to be the supporter of Ashok Gehlot, is to accomodate people from both factions in the party in order to maintain a balance. "From the last six years, when Sachin Pilot was  PCC chief, the youth felt motivated and were given important roles in party organisation which were early restricted to seasoned leaders. But now the Pilot faction has resorted to wait and watch strategy and is hopeful that they will be accomodated. Similarly, those close to Gehlot were sidelined in the last six years and are hoping to get attention under the new president. So the challenge is to keep a balance between the two factions," a senior Congress leader told Outlook.

Going by the sources in the party, Congress leader Avinash Pande's removal and Ajay Maken's appointment as the new party in-charge of Rajasthan is the first signal from the central leadership indicating that the grievances  raised by Pilot during his meeting with Priyanka Gandhi and Rahul Gandhi in New Delhi are being heard. It has given sudden hope to the Pilot faction, particularly to leaders who had to lose their posts after Pilot's rebellion. Now all eyes are on the committee formed by central leadership to look into the grievances, highlighted by the Pilot camp.

"A lot is expected from Ajay Maken, who comes with a lot more leadership qualities. Right now, the party needs someone who can make truce between the two factions within the party," another senior Congress leader told Outlook. Last month, Pilot had openly told the media that Avinash Pande was impartial towards him.

Both Pilot and Gehlot welcomed the new Rajasthan party incharge with a hope. While Sachin Pilot tweeted, "Congratulations to Ajay Maken ji on being appointed the general secretary in-charge of Rajasthan. Your appointment will definitely boost the hopes of Rajasthan Congress workers", few minutes later Gehlot also welcomed the move by tweeting, "I congratulate Shri Maken and hope that his vast organisational experience will help strengthen the party and energise the party workers in the state. Eagerly looking forward to working with him."

A month-long tussle between Rajasthan Chief Minister Ashok Gehlot and his former deputy Pilot may have officially ended on the eve of Independence Day inside the Assembly after the former displayed his strength by winning the confidence motion via voice vote, but confusion over the entire episode percolates down across the organisational structure of Congress in Rajasthan.

Gehlot may have emerged powerful by ensuring the stability of government and keeping the herd of MLAs together for a month, the change in the state leadership has been ruled out. But the biggest challenge for him remains the rejuvenation of the party.