Posters Show PM Modi As Mahishasura Ahead Of Rahul Gandhi's Rally In Patna, Cong Distance Itself

The posters, which have been allegedly put up by Congress supporters, have drawn the ire of the Bharatiya Janata Party. 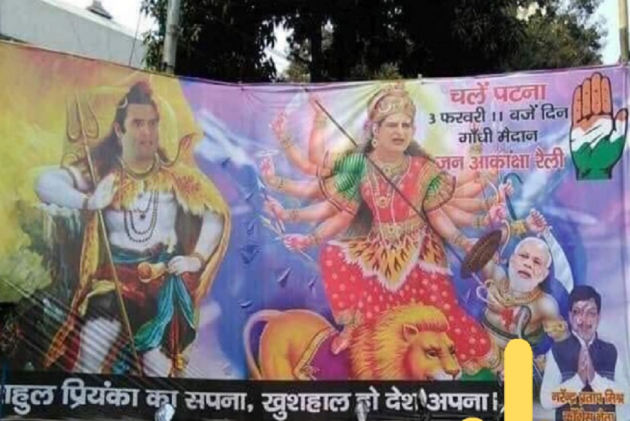 Congress refused to be held accountable for posters where Prime Minister Narendra Modi has been depicted as Mahishasura in Patna, a day ahead of Congress chief Rahul Gandhi's rally.

The posters, which have been allegedly put up by Congress supporters, have drawn the ire of the Bharatiya Janata Party. It also depicts Gandhi as Lord Rama and Priyanka Gandhi Vadra as Goddess Durga, who had slain the demon king Mahishasura.

A case has been registered by a local resident at a civil court in Patna against Gandhi, state Congress chief Madan Mohan Jha and other party leaders for allegedly hurting "Hindu sentiments" by coming up with posters that depicted party leaders as Hindu deities.

"This is not a Congress poster. We cannot be held guilty for deeds by people who claim to be our supporters but are not bound by the party discipline," Jha said.

"We would try to find out who has come out with such a poster. If he is found to be in any way associated with the party, strong action will be taken," Prem Chandra Mishra, party MLC and the chairman of the media cell set up for the 'Jan Akanksha' rally, said.

Local resident Rakesh Dutt Mishra has alleged in the petition that Hindus had felt "aggrieved" by the posters, some of which show Gandhi as Lord Rama while some others depict him as Lord Shiva.

The petition, filed under IPC sections 153 A, 295 A, 298 and 120B, relating to insulting with intent to cause a riot and causing hurt to religious sentiments, is likely to come up for a hearing next week.