The former Gujarat politician and Modi-aide is back in the vortex of another political storm. 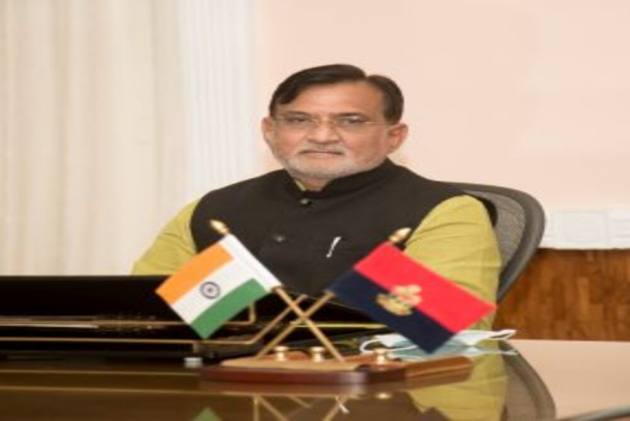 Within six months of taking charge as administrator of Lakshadweep, Praful Khoda Patel, a former Gujarat BJP leader and confidante of Prime Minister Narendra Modi, has more than a few rare distinctions to his credit. Patel’s actions as the administrator of the archipelago have united political leaders of the Congress, the BJP, the NCP and other parties in vociferous protests against him. A slew of controversial decisions taken by Patel have also ensured that India’s smallest union territory, which hitherto enjoyed pride of place on travel glossies for its tranquil beaches, spectacular sunsets, stunning marine life and magnificent coral reef, leapt to the front pages of national dailies for rising Covid cases, disruption of communal harmony and a draconian law reminiscent of the infamous TADA and POTA.

Appeals to the Centre to recall Patel have been growing louder. Kerala chief minister Pinarayi Vijayan, NCP supremo Sharad Pawar, Congress leaders Rahul Gandhi and Priyanka Gandhi Vadra, Lakshadweep MP P.P. Mohammed Faizal (of the NCP) and several of the BJP’s local leaders have urged Modi to either sack Patel or recall him and reverse the controversial administrative decisions that he has taken since assuming charge as the UT’s administrator in December last.

Yet, if Patel’s name doesn’t ring a bell for a majority of common citizens outside his home state of Gujarat or the union territories of which he serves as administrator – besides Lakshadweep, he is also the administrator for the newly merged UTs of Dadra & Nagar Haveli and Daman & Diu – it is, arguably, because the controversial leader never really had anything particularly noteworthy in his long public life. Until recently.

A former one-term MLA from the Himmat Nagar constituency in Gujarat’s Sabarkantha district, the highlight of Patel’s political career had come rather accidentally way back in August 2010 when Modi pulled one of his famous surprises and selected Patel, over several senior BJP legislators, to take charge as Gujarat’s minister of state for home. The portfolio had fallen vacant after its then holder, Amit Shah, had to resign from Gujarat’s council of ministers led by Modi following his arrest in the case of Sohrabuddin Sheikh’s alleged fake encounter. While Patel continued to serve as Gujarat’s MoS for Home till December 2012 – he lost the 2012 Assembly elections – he never attracted the kind of media attention or political limelight that marked Shah’s tenure.

A former BJP leader from Gujarat tells Outlook that Patel was “happy working in the shadows, he showed no great ambition and he knew that his appointment as minister was only a stopgap arrangement because, while he enjoyed Modi’s trust, he had no political heft of his own.” Those who know the 63-year-old Patel often attribute his close equations with Modi to the roots that the two leaders have in the RSS. Prior to his political debut in 2007, Patel was largely contented with running his successful construction business, which thrived on government contracts for laying new roads and highways – a priority area during Modi’s first stint as the Gujarat chief minister. “Up until the time he decided to join politics, Patel’s identity was largely that of the son of Khodabhai Patel, a prominent member of the RSS in Gujarat who also shared a strong relationship with Modi, besides that of being a rich and successful civil contractor,” says the former BJP leader.

After Patel lost the 2017 Gujarat assembly polls despite his party’s sweep, he was largely out of political limelight. Then, in 2016, his appointment as administrator for Daman & Diu stunned observers, just as his induction in Modi’s Gujarat cabinet had done a decade ago. Shortly after, he was also given charge of Dadra & Nagar Haveli and continued in the role when the Modi government decided to merge the two union territories in 2020. He then succeeded former Intelligence Bureau chief and prominent government interlocutor for Jammu & Kashmir, Dineshwar Sharma and the administrator for Lakshadweep on December 5, 2020.

However, as administrator of the union territories, Patel’s propensity for attracting controversies has been difficult to reconcile with his earlier image of a low profile political leader who was happy working under the radar during those tumultuous days in Gujarat’s politics. Indeed, even his appointment as administrator had raised eye-brows given that the role, unlike that of Governors of States, usually was the exclusive preserve of bureaucrats – retired IAS and IPS officers. Over the past two years, whenever Patel’s name has made it to the headlines, it’s been for unflattering reasons and accusations of working as a pawn of the ruling dispensation at the Centre.

The first controversy that Patel found himself in was during the 2019 Lok Sabha polls. A show cause notice issued by Patel to then Dadra and Nagar Haveli collector Kannan Gopinathan triggered a controversy which finally ended up with the Election Commission. Gopinathan accused Patel of issuing directions during the polls which violated the Model Code of Conduct for elections. In an embarrassment for Patel, the EC asked the administrator to withdraw the notice issued to Gopinathan. A few months after the elections, Gopinathan resigned from the IAS.

Earlier this year, Patel was once again in the news – this time for serious allegations of driving a sitting MP of the Lok Sabha to death by suicide. On February 22, Mohan Delkar, independent MP from Dadra & Nagar Haveli, was found dead in a hotel room in Mumbai. In a 15-page suicide note, Delkar, who had previously been elected to the Lok Sabha six times and had been with both the Congress and the BJP at various times, alleged that he had been under a lot of pressure from the local administration, including Patel, and also insinuated that false cases were framed against him because of his refusal to pay bribes. Later, the MP’s son, Abhinav Delkar filed a police complaint claiming that Mohan Delkar was “harassed” by Patel and was asked to pay Rs. 25 crore in bribes or face cases under the Prevention of Anti-Social Activities Act.

A FIR was registered against Patel and others by the Mumbai Police on the basis of Abhinav Delkar’s complaint in March and the Maharashtra government set up a special investigation team to look into Mohan Delkar’s suicide case. The Congress party squarely blamed Patel for driving Delkar to suicide and demanded his arrest. However, the case took a curious turn later when, in wake of police officer Sachin Waze’s arrest in the unconnected case regarding an explosives-laden vehicle being found parked near Mukesh Ambani’s resident in Mumbai. Under fire for his alleged lapses in the Waze case, then Mumbai Police commissioner Parambir Singh claimed that he had been forced by then Maharashtra home minister Anil Deshmukh to file the FIR naming Patel in the Mohan Delkar suicide case. Singh also alleged that Deshmukh had been interfering in the probe into Delkar’s suicide, ostensibly with political motives of embarrassing the BJP.

Singh’s abrupt ouster as Mumbai police commissioner and the subsequent resignation of Deshmukh as Maharashtra’s home minister put a swift end to the controversy surrounding Patel’s alleged role in Delkar’s suicide note. After a brief lull, the former Gujarat politician and Modi-aide is, however, back in the vortex of another political storm – this time in the otherwise peaceful environs of Lakshadweep.