Private Bus With 34 Passengers On Board Hijacked In Agra

Police said some men in SUVs chased the bus and overtook it at Malpura area. They got into the bus and forcibly brought down the driver and the conductor and then sped away on Delhi-Kanpur highway. 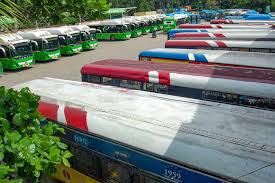 A privately-operated bus with 34 passengers on board was hijacked by recovery agents of a finance company in Uttar Pradesh's Agra on Wednesday morning, officials said.

The incident took place in the Malpura police station area when the bus was en route to Panna in Madhya Pradesh from Gurgaon in Haryana, according to police.

"Regarding the bus incident in Agra, the finance company had illegally seized the bus. The driver, staff and passengers are safe. The bus owner died yesterday (Tuesday) and his son is conducting the last rites," he said in a statement.

However, the statement did not mention the whereabouts of the bus.

Senior Superintendent of Police, Agra, Babloo Kumar said three people who got off the bus informed the police that representatives of the finance company had boarded the vehicle.

"Preliminary information reveals the bus has been taken away by the people from a finance company which had financed the vehicle. A case has been registered and police teams formed to search for it," he said.

He said it was a finance-related incident and the action of the men was "audacious".

The registration number of the sleeper bus is UP75M 3516 (Etawah in UP) but it is owned by a private operator in Gwalior, Madhya Pradesh. A total of 34 passengers were on board the bus, according to the police.

SSP Kumar said the episode started around 10:30 PM on Tuesday when the bus was near Raibha toll plaza at Dakshin bypass and eight-nine young men in two SUVs intercepted it. These men claimed they were from the finance company and asked the bus driver to get down but he ignored them and continued the ride, he said.

"The men in SUVs then chased the bus and overtook it at Malpura area. They got into the bus and forcibly brought down the driver and the conductor. They also told the passengers to not scream and assured them that no harm will be done to them," he added.

Later, four of these men boarded the bus and sped away on the Delhi-Kanpur highway, Kumar said.

He said the driver and the conductor of the bus were taken in one of the SUVs and dropped off in Kuberpur area on the highway around 4 am after which they approached the local police for help.

Police personnel, including the district police chief, then reached the spot and a search operation was launched to track the bus, he said.

In the wake of the incident, opposition parties targeted the Chief Minister Yogi Adityanath-led government over the law and order situation in the state.

"The so-called finance company hijacking the bus in a filmy manner suggests lawlessness in UP. The incident has laid bare the hollow claims of law and order in the state. Dear government, is this the 'Yogi model' of law and order?" Congress state unit chief Ajay Kumar Lallu said in a tweet in Hindi.

The Samajwadi Party asked the government to ensure safe return of all passengers.

"The hijacking of a bus with 34 passengers in Agra is a very sad and frightening incident. The law and order situation in UP is so severe that even the biggest of crimes are being carried out anywhere. Prayers for the safety of all travellers," it said in a tweet in Hindi.