Priyanka Gandhi Hits Out At PM Over Handling Of Covid Pandemic, Says Modi Has Let Country Down

She said hat Indians do not come first for the PM, politics does and that truth does not concern him, propaganda does. 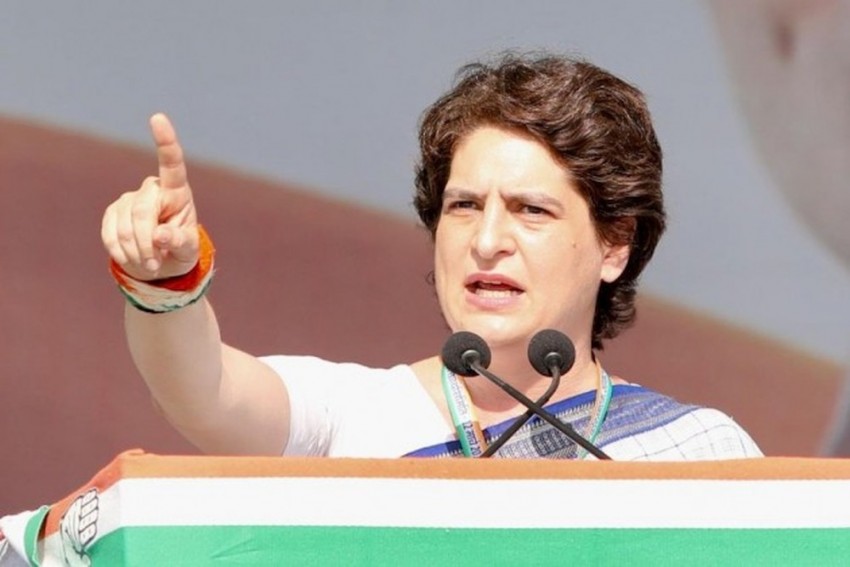 Congress leader Priyanka Gandhi on Saturday hit out at Narendra Modi over the government’s handling of the COVID-19 pandemic, alleging that the prime minster has let the country down.

She said hat Indians do not come first for the PM, politics does and that truth does not concern him, propaganda does.

As part of her "Zimmedaar Kaun (who is responsible)" campaign, in which she has been asking questions of the government over its handling of the pandemic, the Congress general secretary focused on the "crisis of leadership" and claimed that the whole world has witnessed the prime minister's “incompetence at governance” during the pandemic.

“He (the prime minister) simply retreated and waited for the worst to pass. The Prime Minister of India has behaved like a coward.  He has let our country down,” Priyanka Gandhi said in her statement posted on her Facebook, Twitter and Instagram accounts.

The prime minister's vast capacity for vanity has been exposed, she claimed.

“Indians do not come first for him. Politics does. Truth does not concern him, propaganda does," Priyanka Gandhi alleged and asserted that the time has come for the people to ask the prime minister 'Zimmedaar Kaun (Who is responsible)'.

Good governance in a crisis is about confronting the truth, seizing responsibility, and taking action, she said.

"Unfortunately, the Modi government did none of these. Instead, from the beginning of the pandemic, it made every attempt to hide the truth and to shirk responsibility," the Congress general secretary alleged.

"As a consequence, when the second wave hit us with unprecedented force, the government lapsed into a state of inaction. This inaction enabled the virus to spread with far greater ferocity and cause untold suffering," she said.

Priyanka Gandhi also listed a series of measures that the prime minister should have taken in the wake of Covid spread.

“If only the Prime Minister had acted upon the countless warnings he had been given by experts from India and around the world and if only he had listened to the recommendations of his own ‘Empowered Group’, or even to the Parliamentary Committee on Health, we would not have faced the horrendous shortage of beds, oxygen and medicines that we did,” she claimed.

"Had he cared about those who looked towards him for leadership, he would not have reduced the number of dedicated Covid beds between the first and the second wave. He would have ordered the tankers required to transport oxygen and prepared for the diversion of industrial oxygen to hospitals,” Priyanka Gandhi asserted.

She hit out at the prime minister, saying that he exported millions of doses of life-saving drugs without ensuring provisions for Indian lives first.

“Had the Prime Minister prioritized the people of India above his own PR and image building, we would not have the shortage of vaccines we have today,” Priyanka Gandhi said.

“Had he woken up from his slumber and ordered vaccines in the summer of 2020 instead of waiting till January 2021, he could have saved countless lives,” she claimed.

Instead of distributing free vaccines across the world to boost his own image, had he paused for a moment and protected his countrymen first, the people would not be standing in line today grappling with a convoluted registration system designed to slow down the vaccine process, she said.

“We could have vaccinated a very significant proportion of our population by now, considering we are one of the largest vaccine producers in the world,” she argued.

She also slammed Modi for not taking opponents along in this battle for Indian lives, saying he could have engaged with experts, critics, allies and the opposition fearlessly.

“He could have used the media as a disseminator of life-saving information about Covid, rather than as a propaganda tool to promote his own image,” Priyanka Gandhi alleged.

In her statement, she also accused the prime minister of putting politics before human lives, saying he should have helped support the states in their heroic battle against COVID-19.

“As the leader of a nation deep in crisis, he would have sent his colleagues in the states resources, cleared their dues and strengthened their efforts instead of appearing on TV repeatedly to whine and complain about them in a pathetic attempt to abdicate his own responsibilities,” she said, in a sharp attack at the PM.

Had the prime minister been an informed and competent leader he would have planned, strategized and prepared for the inevitable second wave, the Congress general secretary said, adding that he would not have set aside the tools of science and modernity and transported us back through thaali-banging and lamp lighting rituals into the darkness of bygone centuries.

"Indeed, had the Prime Minister been the man his admirers believed him to be, had he had the mettle of a statesman, or the compassion and bravery of a true leader, he would have come forward and comforted his countrymen when they most needed reassurance and succor," she said.

He did none of this, Priyanla Gandhi added, slamming the prime minister's leadership during the Covid crisis.

Quoting the lines written by the celebrated poet Nirala in his novel ‘Kulli Bhaat’, in which he describes the grim scenes that unfolded during the Spanish Flu epidemic one hundred years ago, she said they are eerily prescient, even more so now because "we live in modern times, when such scenes of collective turmoil caused by an abdication of governance ought to be a thing of the past".

The Congress has been critical of the Centre's handling of the Covid situation in the country, but the government has dismissed the criticism of the Opposition party, accusing it of politicising the pandemic.