Congress general secretary Priyanka Gandhi's visit to Umbha village, nearly a month after she was prevented from going there by the local administration, was, however, mocked by Uttar Pradesh Deputy Chief Minister Dinesh Sharma and BSP leader Mayawati. 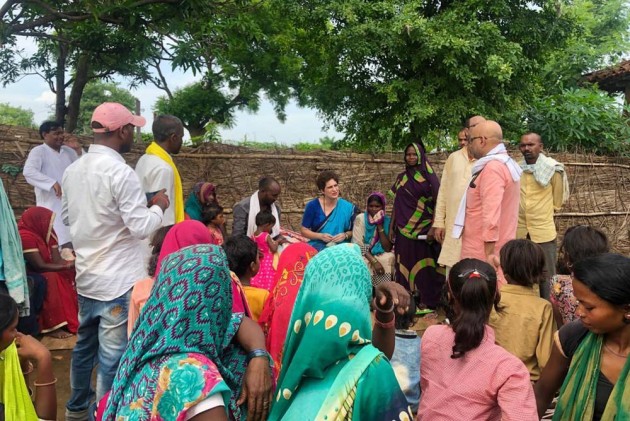 Keeping her “promise” to visit the village where 10 tribals were shot dead last month, Congress leader Priyanka Gandhi Vadra Tuesday met the victims' families and vowed to stand with them till they get back the land over which the clash took place.

The Congress general secretary's visit to Umbha village, nearly a month after she was prevented from going there by the local administration, was, however, mocked by Uttar Pradesh Deputy Chief Minister Dinesh Sharma and BSP leader Mayawati.

The minister called it a “political stunt” and the Bahujan Samaj Party chief accused her of shedding crocodile tears.

After UP CM Yogi's Visit To Sonbhadra, Priyanka Gandhi Says 'The Visit Is Late But Welcome'

"We will stand with these people till they get their land back. They are still being harassed by the administration and the government," the Congress leader charged during an interaction with the media.

She alleged that fake cases had been registered against the tribals and demanded that they should be withdrawn.

Priyanka Gandhi drove down to the village in Sonbhadra district after landing at Varanasi airport, about 100 km away. During the 90-minute visit, she sat down on the ground, talking with the bereaved families and other local people.

She asked them about the steps taken by the BJP government in the state, particularly after the July 17 killings.

The Congress leader, who is in charge of eastern UP for her party, also called them over to Delhi to discuss the future course of action.

She drove down to the shootout spot, about three kilometres away, taking a couple of women along in her vehicle, according to advocate Nityanand Dwivedi, whom Priyanka Gandhi also met.

Dwivedi is fighting the villagers’ case.

Earlier in the day, she had tweeted, "Today, I am going to Sonbhadra to meet the brothers and sisters and the children of Umbha village, inquire about their well-being and to be part of their struggle."

"I had promised the members of Umbha village’s affected families who had come to meet me at Chunar Fort that I will visit them," she tweeted in Hindi.

On July 19, she was detained overnight at Chunar by Mirzapur administration when she insisted on travelling ahead to Sonbhadra. The administration had then said her visit will create a law and order problems.

During last month’s visit, Priyanka Gandhi had also visited some of the injured at a Varanasi hospital. On Tuesday, she was quick to spot one of the women she met there and enquired about the health of her family members.

She demanded proper health and education facilities for the people of the region, along with land to the landless, including the affected families.

"The root cause of the Sonbhadra incident can be traced to the Congress,” he claimed, referring to transfer of the disputed piece of land during the term of the previous governments.

“She should go there to repent the act of former Congress leaders. After so many days, when action has already been initiated into the incident, this is only a political stunt," Sharma said.

BSP leader Mayawati also referred to this in her tweet.

"Instead of shedding crocodile tears, the SP and the Congress leaders should now come forward to bring the land of the tribals back to them,” she said.

During her visit up to Mirzapur last month, Priyanka Gandhi also promised monetary help to the affected families. A Congress delegation had then visited the village to hand over the money.

On Tuesday, Congress leaders gave her a warm welcome at Varanasi airport.

In Sonbhadra, she also broke her silence on the scrapping of the special status for Jammu and Kashmir.

She accused the Narendra Modi government of not following procedures and rejected suggestions that there were divergent views within the party on the issue.

"The manner in which it has been done is totally unconstitutional and against the principles of democracy," she said when asked to comment on the move.