Even as political parties are busy extracting political mileage out of the virtual shutdown, thousands of patients and their family members who have travelled from remote parts of rural Bengal, are facing a harrowing time. 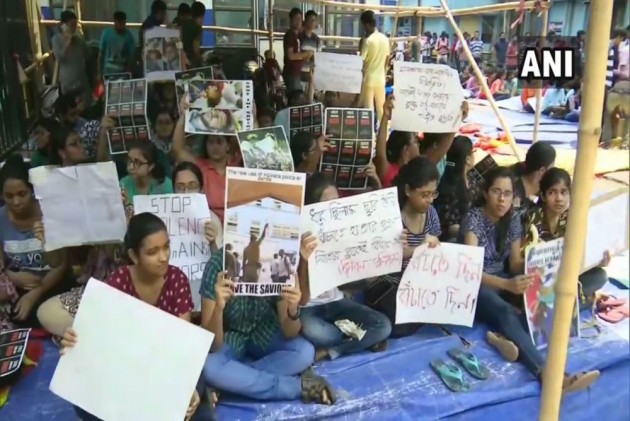 Healthcare services in Bengal are headed for a complete shutdown on Wednesday after junior doctors stopped working in all the state-run medical institutions following an assault on an intern.

Even as political parties are busy extracting political mileage out of the virtual shutdown, thousands of patients and their family members who have travelled from remote parts of rural Bengal, are facing a harrowing time and have crowded in front of the state-run as well as private hospitals, diagnostic centres and other healthcare facilities. Many of them have blocked the city’s major roads protesting medical fraternity’s decision to cease work.

Cashing in on the virtual breakdown of healthcare services, senior Bengal BJP leader Mukul Roy, who visited the NRS Hospital late on Tuesday, said, “People of a particular community carried out the attack and they were backed by the supporters of the ruling Trinamool Congress,” Roy told reporters.

Bengal chief minister Mamata Banerjee, who is known for her penchant to take to the streets, has not yet visited the hospital to meet the two doctors -- Paribaha Mukherjee and Yash Tekwani -- who suffered head injuries and have been hospitalised.

The agitating doctors have refused to call off the protests, demanding Banerjee’s intervention, and have also asked the state government take steps to prevent recurring assault on doctors.

Doctors said the trigger of the cease-work was an assault on several interns, who were on duty at the medicine ward of the hospital, by relatives of patient Mohammad Sayeed, 75, who died during treatment.

At the RG Kar Medical College and Hospital in North Calcutta, Asif Mullah, who was sitting with his ailing mother, said, “We have come from Bongaon in North 24-Parganas for my mother’s gallstone surgery which was scheduled for today. But we were caught unaware about the doctors strike.”

“I don’t know what to do?” Mullah said, echoing hundreds of others who have come from far-flung villages for treatment.

Manik Lal Pramanik from Mohisbathan on the fringes of New Town in North Calcutta is a distraught man as his 10-year old son is running high-fever for the last couple of days and has not found a doctor at the local clinic as private medical practitioners, too, have stopped work in protest.

“My son’s fever has not subsided for the last couple of days and even the local doctor has not come to his clinic this morning...I don’t know what to do...” he told Outlook.

“I even visited the Bidhannagar government hospital in Salt Lake, only to be turned down as the doctors there too, were on strike...I am totally depended now on the across the counter medicines, the local pharmacy person is giving.”

Like in rest of Bengal, the BJP is trying to polarise the medical fraternity in the state, says a private medical practitioner in Siliguri.

“The Mamata Banerjee government is only concerned about politicising doctors’ association and not safeguarding them from hooligans who in the name of negligence of treatment give two hoots about assaulting doctors, most of who are overworked and stressed,” the senior doctor, who did not want to named, told Outlook on phone from Siliguri in North Bengal.

Though most healthcare services have been hit across Bengal, state medical association members said that the emergency wards in state-run and private hospitals are open.