A large number of people marched through streets here damaging public property and vehicles after a person who was injured in police firing on Friday succumbed to injuries at a hospital, police said. 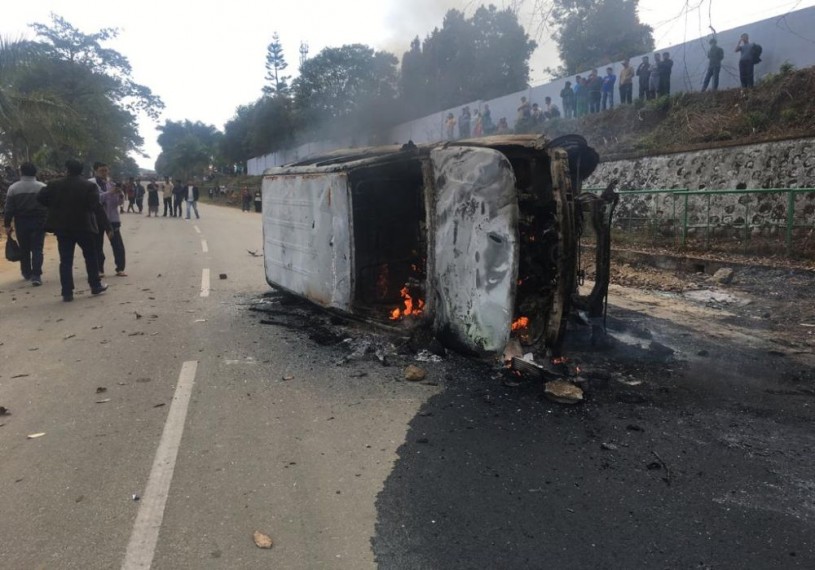 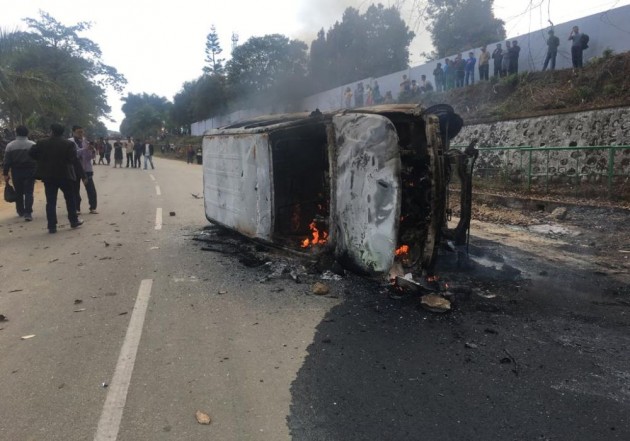 The situation in Itanagar and Naharlagun in Arunachal Pradesh continued to be tense on Sunday as protesters, defying curfew,  ransacked and set ablaze the residence of Deputy Chief Minister Chowna Mein and ransacked the office of the deputy commissioner in Itanagar against the government’s decision to provide Permanent Resident Certificate (PRC) to non-Arunachal Pradesh Scheduled Tribe (APST) residents.

Chowna Mein was shifted to Namsai district on Sunday morning.

“The protestors are heading towards the CM residence in Itanagar. And we can hear the guns firing,” said a resident of Itanagar.

The protesters have been demanding resignation of Chief Minister Pema Khandu and justice for the killing of two of the protestors. The situation further deteriorated in Itanagar on Sunday afternoon.

The deceased have been identified as Biki Ruja (20) and Tsering Wangdi (34).

Though the government has decided not to go ahead with the PRC development, the protests continued.

The protest erupted after it was announced by Chief Minister Pema Khandu and Deputy Chief Minister Mein in December last year that six non-APST communities residing in the Changlang and Namsai districts will be given a ‘New Year gift’ by granting them PRCs.

A government of Arunachal Pradesh statement on February 24 said that “Considering the present situation in respect of the matter pertaining to grant the PRC to non-APST residents of Namsai and Changlang districts, the state government has decided that no further action shall be taken in respect of grant of PRC”.

Though curfew was imposed and the Army was called in from February 21, the protesters went on ransacking vehicles on the street and other public properties.

A large number of people marched through streets in Itanagar, damaging public property and vehicles after a person who was injured in police firing on Friday succumbed to injuries at a hospital, police said.

They also set on fire a large number of vehicles parked in the compound of the DC's office.

The agitators also blocked the road leading to the Naharlagun railway station, as a result, many passengers, including patients, were held up at the station since Sunday morning.

An indefinite curfew was clamped in Itanagar and Naharlagun on Saturday as protesters resorted to stone pelting in which 35 people, including 24 police personnel, were injured.

The Army had also conducted flag marches in Itanagar and Naharlagun on Saturday.

All markets, petrol pumps and shops were closed and most of the ATMs in the state capital were out of cash, police said.

Over 60 vehicles, including many police vehicles, were set ablaze and over 150 vehicles were damaged by the protesters since Friday, they said.

On Saturday, the agitators damaged the stage of the Itanagar International Film Festival at the Indira Gandhi Park in Itanagar. The organisers later called off the film festival.

Around 50 artistes including Bollywood filmmakers Satish Kaushik and Ronnie Lahiri, among others, who went to take part in the festival were stuck in the city.

On Saturday, they were escorted to the Assam border. Popular Nagaland based musician Alobo Naga and his group’s vehicle was also set on fire.

“The mob burned down our car including all our instruments along with all the other vehicles parked inside the venue (IG park). The stage, sound system, portable movie theatre, trucks, gen set etc. all down to ashes,” said Alobo.

The Joint High Power Committee (JHPC), after holding parleys with the stakeholders, recommended granting permanent resident certificates (PRCs) to six communities, who are not natives of Arunachal Pradesh but have been living in Namsai and Changlang districts for decades.

The proposals evoked resentment among several community-based groups and students' organisations, who claimed that the rights and the interests of indigenous people will be compromised if the state government accepts them.

The recommendation of the JHPC was supposed to be tabled in the Assembly on Saturday but was not tabled as the Speaker adjourned the House sine die.

On Saturday, Union Home Minister Rajnath Singh appealed to the people of Arunachal Pradesh to remain calm and maintain peace.

He also spoke to Arunachal Pradesh Chief Minister Pema Khandu, who briefed him about the prevailing situation in the border state.