The call for a bandh given by the Karnataka Raitha Sangha (Karnataka Farmers' Association) and other farmer organisations is supported by the Congress, JD(S), Karnataka Rakshana Vedike (KRV) and the Left parties. 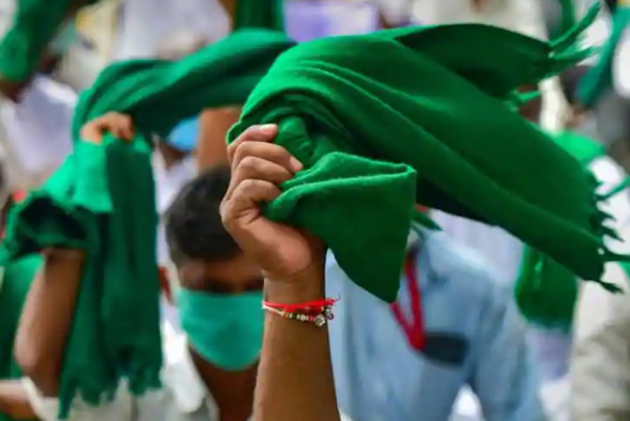 Pro-farmer organisations backed by a number of other social and political outfits have staged protests across Karnataka over the amendments to the APMC and land reforms act.

Several Congress and JD(S) workers were detained on Monday over protest against the amendments to the Agricultural Produce Marketing Committee Act and land reforms acts made by the B S Yediyurappa government. The protestors have submitted a memorandum to Prime Minister Narendra Modi through Tahsildar in Hubballi.

Yediyurappa Brushes Aside State-Wide Bandh, Says 'My Govt Is Pro-Farmers'

Meanwhile, while making an appeal to farmers’ organisations spearheading the protests Karnataka Chief Minister B S Yediyurappa on Monday said, "We have not shut the door on APMCs." The CM also urged the farmers to wait for six months or a year.

"Even now, farmers who get a better rate in the APMCs can go and sell their produce there. The organisations should understand this."

The CM said that his government's land reform amendment bill — removing restrictions on the purchase of agricultural land in Karnataka — passed in the state Legislative Assembly on Saturday will not harm farmer's interests, pointing out that irrigated land can only be used for farming and that land granted to SC/STs cannot be purchased. "It is true that we had initially proposed a land ceiling of 108 acres (for a five member family). But after discussions, we reverted to the earlier ceiling of 54 acres," he said, adding that safeguards have been out in to protect small and marginal farmers.

The demonstrations were against two important amendments to the Karnataka Land Reforms Act and the Agricultural Produce Marketing Committee Act passed by the Karnataka Assembly despite strong objection by the opposition parties, mainly the Congress and JD(S).

The amendment to the KLR Act lifts restrictions on purchasing agricultural land and enables any individual to purchase it.

Earlier, the law permitted only the farmers to purchase agricultural land in the state.

The repeal of certain provisions in the APMC Act through an amendment allows private players to directly purchase agriculture produce from farmers, which was prohibited earlier.

The protesters alleged that these laws will ruin the agriculture sector as people with moneybags will purchase agricultural land to convert their black money into white and turn agriculture land into real estate business.

The farmers alleged that the amendment to the APMC Act will deprive them of the minimum support price and enable multinational companies and big corporate houses to directly procure produce at their rates.

The call for a bandh given by the Karnataka Raitha Sangha (Karnataka Farmers' Association) and other farmer organisations is supported by the Congress, JD(S), Karnataka Rakshana Vedike (KRV) and the Left parties.

Ignoring the coronavirus fear, farmers came on the roads in groups, raised slogans, took out bike rallies, burnt tyres in protest on the road and staged sit-in demonstrations.

At many places, the demonstrators courted arrest.

In Bengaluru, farmers and KRV members including its chief T A Narayana Gowda took out a rally and tried to stop buses when they were arrested.

Protests were held at various places including Mysuru Bank circle, Town Hall, Yelahanka and Ballari Road in the city.

The Congress, which has extended support to the protests, said it will stage a demonstration in front of its office on Race Course Road in Bengaluru.

Chief Minister B S Yediyurappa on Sunday had appealed to the protestors not to create unnecessary confusion over the amendments.

Stating that he had spoken to leaders of farmers organisations, Yediyurappa said his government's stand and the expectations of the Prime Minister were in favour of the farmers.

Revenue Minister R Ashoka had said there would be no scope for the bandh from the government side.

As there was a crackdown on the protesters, AICC general secretary in-charge of Karnataka, Randeep Singh Surjewala, asked the Chief Minister to repeal the 'draconian amendments' instead of banning the bandh.

"Dear B S Yediyurappa ji, Instead of banning the Farmers #Karnataka Bandh, 'ban' & 'banish' the anti farmer- labourer mindset. Withdraw the law & apologise for the blatant sell out by BJP on Land Reforms Bill. Repeal the draconian amendments to APMC Act. This is your litmus test!" he tweeted.