Narayanasamy has accused Bedi of not approving his government's 39 proposals for welfare schemes, including one for a free-rice scheme, and on administrative matters. 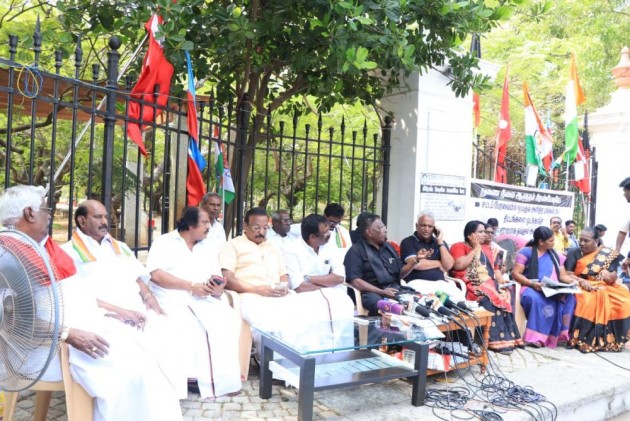 Puducherry Chief Minister V Narayanasamy, who has been protesting against the "negative attitude of Lt Governor Kiran Bedi" in Puducherry since February 13, denied her allegations that his agitation was "politically motivated"

His comment came as the protest outside the Raj Nivas entered the sixth day on Monday.

Narayanasamy has accused Bedi of not approving his government's 39 proposals for welfare schemes, including one for a free-rice scheme, and on administrative matters.

Being 'Forced' To Sleep On Road: Arvind Kejriwal Expresses Concern Over Puducherry CM

Bedi had, in her letter to the chief minister on Sunday, pointed out that she had cut short her public engagements in Delhi and returned to the Union territory to hold a meeting with him to avoid inconvenience to the people of Puducherry "due to your politically motivated agitations".

Denying Bedi's charge, the chief minister said the dharna did not have a political motive and the aim was to ensure that the people's demands were met.

Bedi had also stated in a WhatsApp message that the chief minister had laid down conditions for accepting her invitation to a meeting to settle the issues contained in his February 7 letter.

These conditions put forward by the chief minister related to his choice of venue for the meeting, how to conduct the meeting and who all should or should not be present during the deliberations.

Bedi had said "his reasons for continuing the agitation are obviously for reasons other than what he is claiming".

The Lt Governor had also said at the end of her message that the "matter is over", rejecting the conditions.

Kiran Bedi Must Shun ' I am the government', attitude.
A must read interview .
The Hindu newspaper,
Dt. 18.02.2019. pic.twitter.com/eLo4XcYjNh

She informed Narayanasamy through her letter that "it appears to me that you want to stretch the matter unduly as it suits you politically".

The meeting envisaged on Sunday did not take place following the Lt Governor's rejection of the conditions the chief minister had put in his missive to her.

"As the chief minister and a constitutional authority, I have the prerogative to inform you where to conduct the meeting and who all should be present and who should not be," Narayanasamy had pointed out in his missive to the former IPS officer.

He had minced no words and said, "I am able to understand that you are sitting with clear prejudices and decisions on all the issues raised before discussion."

The Lt Governor and the government headed by Narayanasamy have been at loggerheads over various issues ever since Bedi assumed office in May, 2016.