The Congress, heading the Secular Democratic Alliance (SDA), has been earmarked 15 constituencies out of the total 30 segments in the Union Territory. 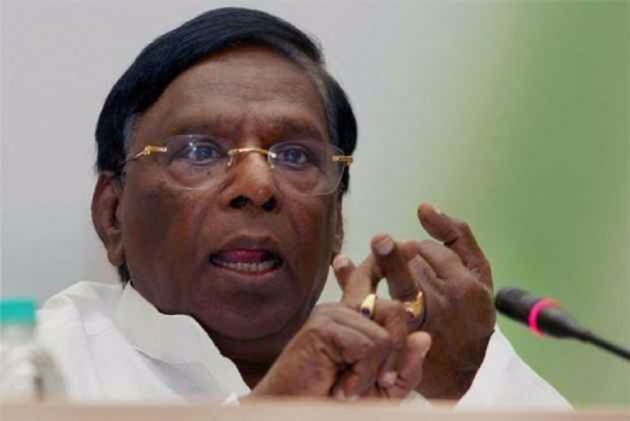 Senior Congress leader and former Chief Minister of Puducherry V Narayanasamy on Sunday said he would not be contesting upcoming assembly elections in Puducherry as there was a need to bring in coordination in poll-related works and programmes of the party in the Union Territory.

Talking to reporters at the PCC office in Puducherry, Narayanasamy said that the president of the Pradesh Congress Committee A V Subramanian was contesting the poll from Karaikal (north) and so he (Narayanasamy), along with the Congress Member of Parliament V Vaithilingam, had to coordinate election-related party activities.

"This is the reason for my not contesting the poll," he said.

The Congress, heading the Secular Democratic Alliance (SDA), has been earmarked 15 constituencies out of the total 30 segments in the Union Territory.

The party has fielded its candidates in 14 seats leaving out Yanam where it would support an Independent.

He said Malladi Krishna Rao of the Congress, who was Health Minister, had announced support to the AINRC nominee N Rangasamy seeking election from Yanam.

Rao had also quit the post of Health Minister and that of MLA.

"There was delay in fixing a nominee of the Congress for Yanam," he said and added that an independent Kolapally Ashok had, in the meanwhile, sought support of the Congress in the poll in Yanam.

"We are supporting Ashok in response to his request," Narayanasamy said.

He alleged that since last week certain government departments in the Centre have been targeting leaders of the rival party and been taking action against them in Puducherry.

He did not, however, elaborate on the departments but said such action should be avoided.

He appealed to the election authorities to act in an impartial manner. "This is our big appeal to the authorities."

Narayanasamy reiterated that the Union Home Minister Amit Shah should prove and show evidence in support of his (Shah`s) allegation against him that he had given cut money to the Gandhi family from the Central funds meant for the Union Territory.

Shah had said while addressing a public rally in Karaikal on February 28 that Prime Minister Narendra Modi had given to Puducherry Rs 15,000 crore as Central grant and that "I had given cut money out of this to the Gandhi family."

Rejecting the charge, Narayanasamy reiterated his call to the Home Minister to prove it or tender an open apology. "I am ready to face any probe into this as the allegation is
unfounded," he said.

He said the local unit of Bharatiya Janata Party had also brought out what they called charge sheet against him and the government he had headed.

Narayanasamy said voters in the Union Territory were aware that the BJP would implement anti-people and anti-development programmes if it was voted to power in Puducherry.

He said power distribution, department of printing press and stationery and several other essential services here` would be privatised if the NDA captured power in Puducherry.

"People in Puducherry will never give scope to parties promoting communal and religious sentiments," he said.

Claiming that the Congress-led SDA would romp home in the forthcoming polls, Narayanasamy said he, along with Vaithilingam, and other leaders of the alliance would embark on electioneering on Monday from neighbouring Kalapet village.