Pulwama Attack: Security Of Those Who Receive Money From ISI, Pak Needs To Be Reviewed, Says Rajnath Singh

The Home Minister, who gave a shoulder to some of the coffins of the CRPF men killed, said that civilian traffic would be restricted in Kashmir during the movement of the army and security forces convoys. 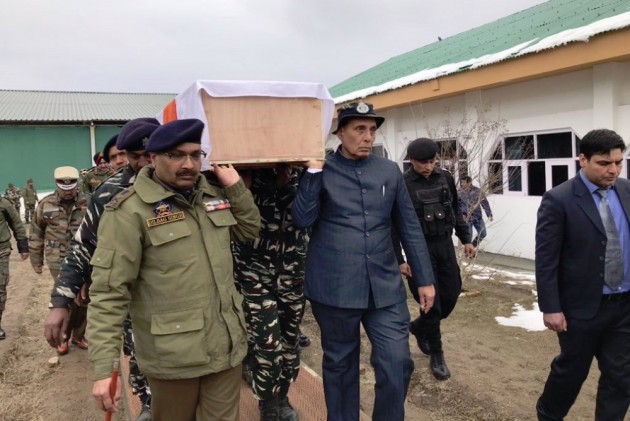 After a visit to the site of the terror attack in Jammu and Kashmir’s Pulwama, Union Home Minister Rajnath Singh said Friday that the security provided to “people receiving funds from Pakistan and ISI” needs to be reviewed, in an obvious reference to Kashmiri separatists,

He said that “some elements” in Jammu and Kashmir have links with the ISI and terrorist organisations.

“There are some people who are hand in glove with terror organisations, terror forces and ISI across the border. They are involved in terror conspiracies too,” he said, a day after 40 CRPF personnel were killed in a fidayeen attack by a Jaish militant.

HM Rajnath Singh in Srinagar: There are some elements who are hand in glove with terror organisations, terror forces & ISI across the border. They are involved in terror conspiracies too. They are toying with the future of the people, especially the youth, of J&K. #PulwamaAttack pic.twitter.com/wyq6BUM2X0

Those Behind Pulwama Will Have To Pay, Security Forces Given Complete Freedom: PM Modi

Opinion | Pulwama Attack: India's Response Has To Be Well Considered, Options Not Unlimited

We Never Thought He Would Join Militancy, Says Stunned Father Of Jaish Militant

'We Are At Fault Also', Says J&K Governor, Admits To Intelligence Failure In Pulwama

The Home Minister, who gave a shoulder to some of the coffins of the CRPF men killed, said that civilian traffic would be restricted in Kashmir during the movement of the army and security forces convoys.

"Civilian traffic movement will be restricted for some time during movement of army and security forces convoys. This may cause inconvenience and I apologise for this but this is necessary for the safety of jawans," he told reporters after a high-level security review meeting here.

“I have instructed the Jammu and Kashmir government to ensure communal harmony,” said the Home Minister.

He said that India will “win a decisive war against terrorism”.

The nation will not forget the supreme sacrifice of our brave @crpfindia jawans. Paid my last respects to the martyrs of Pulwama in Srinagar today. Their sacrifice will not go in vain. pic.twitter.com/uJKUoFmKev

Prime Minister Narendra Modi on Friday said those responsible for the attack will pay "a very heavy price" and security forces will be given a free hand to deal with terrorists.

In a hard-hitting speech, Modi said the "blood of the people is boiling" and forces behind the act of terrorism will be definitely punished.