Amarinder Singh's New Love For BJP And Its Political Implications 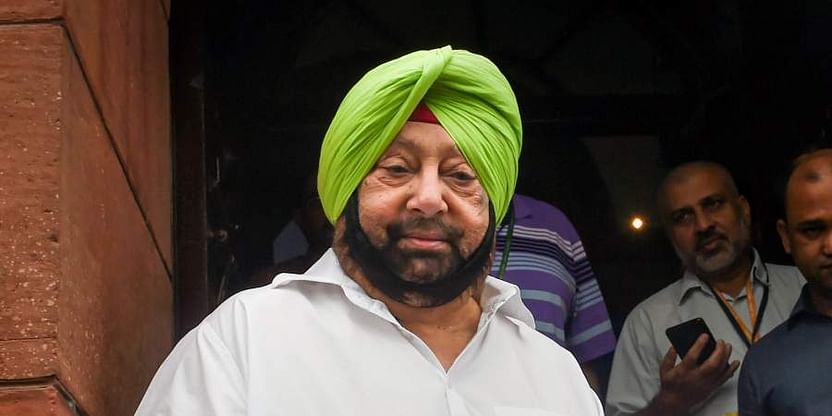 The political future of Punjab Lok Congress, the new political outfit of former Punjab Chief Minister Captain Amarinder Singh, who came out of the Congress's fury, will be decided by the assembly elections scheduled to be held after three months. The 79-year-old Captain, who was in the Congress for more than four decades, decided to form his party rather joining  BJP to avenge his ouster as a "non-performing CM" of the Congress.

About Captain's new party, former leader of Aam Aadmi Party and political analyst Prof. Manjit Singh says, “Captain Amarinder Singh has left the Congress, but why has he asked Congress in his new party Punjab Lok Congress too? The question is clear that it is a big challenge for the Captain of the Congress ideology to coordinate with the BJP or the Taksali Akalis, but the captain is ready for it to hit the Congress.

He also added that if Captain Amarinder decided to either share or support a seat-sharing alliance with the BJP ahead of the elections, the biggest challenge before him would be the agitating farmers of the state opposing the three farm laws. It would be difficult for the Captain, who himself brought the bill in the Legislative Assembly during his Chief Ministership against the agricultural laws.

Amarinder's relationship with BJP will remain under threat unless a positive solution to the agricultural laws is found since Congress ousted him from the chief minister's post  Only a positive solution can be beneficial for both parties. Amarinder's new love for the BJP has serious political implications for him.

The Captain, who is looking for the possibility of an alliance with the BJP and Taksali Akali leaders in the face of the Congress, is not the right one to return to power, but the purpose of the Captain is to oust the Congress government from Punjab. For this, the captain has now become an attacker on the same cabinet of Congress's Channi government, many of which have been in his cabinet during his Chief Ministership.

Captain Amarinder Singh, who has accused several Congress ministers of colluding with the sand mafia, has said, "I am very sorry that as Chief Minister, I did not take action against those ministers of my cabinet because the Congress would have been defamed".

A major concern of the Channi government of the Congress is the allegations of complicity on their ministers with the sand mafia. Captain Amarinder said that he had the names of many ministers in the list, which was given to him by the Intelligence when he was the Chief Minister. If Amarinder Singh makes the names of those ministers public just before the election, then the situation of Congress in Punjab may get worse. Navjot Sidhu, who missed out on becoming the Chief Minister after the removal of the Captain, is already an attacker on the Channi government.

The BJP is in power at the Centre but remains marginalized in Punjab. The BJP is also on the lookout for a face like Amarinder Singh to come out of the uncertain political future in the state as the Shiromani Akali Dal, which was in alliance for three decades, broke ties with the BJP last year in protest against three farm laws. It seems unrealistic to expect that voters will vote for his new party in this changed Punjab scenario.

The former chief minister cannot win by his past fame alone. With elections approaching, he is left with a few months only. Elections are being held in Punjab at a time when the farmers' agitation against the three agriculture laws of the Center is unlikely to back down.

Amarinder knows that reaching out to protesting farmers in their new ‘avatar’ is a possible way to repeal three agricultural laws in their favour which could benefit the BJP in states including Punjab that are going for conducting polls in 2022. The Captain has proposed a solution to re-engage the link between the BJP and the farmers. In Punjab, Captain's new party Punjab Lok Congress(PLC) and BJP could emerge as a fourth front if he could strike a deal to break the deadlock.

Farmers have a big vote bank in Punjab, which every political party is trying to take advantage of. SAD president Sukhbir Badal's wife Harsimrat Kaur Badal was in the Modi cabinet when the three agriculture laws were approved. Even though the Akali Dal broke the alliance with the BJP after the resignation of Harsimrat Kaur, it was too late. “Farmer organizations are seeing this only as an exercise to save face”, Says B.S Rajewal BKU(Rajewal)president, to Outlook.

In his attempt to reconcile with the BJP, Amarinder will face questions over the alleged erosion of the country's federal structure, which he has been supporting for a long time while being in Congress. Especially on the issue of agricultural laws. He will also have to clarify whether he would prefer Punjab's farmers or corporate forces. There is strong opposition from the BJP leaders in the rural areas of Punjab against the agricultural laws. Due to this protest, if the BJP and Punjab Lok Congress candidates do not have access to the voters, then it cannot be imagined to fight in an alliance with the BJP. However, with a deal on farmers' issues, Amarinder could turn many equations in Punjab for the BJP.

The BJP government at the Center was comfortable with Amarinder when he was chief minister and Amarinder, in turn, has been praising Modi's nationalist image. Be it the Indian Air Force's airstrike in Pakistan's Balakot, or the recent expansion of the BSF's operational range in Punjab, Assam and West Bengal, Amarinder has openly supported the Modi government's moves.

Despite all this, Amarinder needs candidates to contest the assembly elections, some of whom may also come from the Akali Dal camps of Sukhdev Singh Dhindsa and Ranjit Singh Brahmpura along with his former party.

The BJP, in alliance with the SAD, has been fighting 23 of the 117 assembly seats in Punjab. The seat-sharing deal with Amarinder Singh's new party may help the BJP increase its MLAs in Punjab. It can be seen soon how effective this 'game plan' of Amarinder and BJP will be.

The Congress journey of 44 years became a chapter from past.

Singh, who was the Agriculture Minister in the Surjit Singh Barnala government, was re-inducted into the Congress in 1998 by Rajinder Kaur Bhattal. Amarinder who was the Punjab Congress President from 1999 to 2002, was the Chief Minister of Punjab from 2002 to 2007. He was the election campaign committee chairman in 2009 and state Congress president from 2010 to 2013.

In the 2014 Lok Sabha elections, amidst the Modi wave, he had defeated a veteran BJP leader like Arun Jaitley by more than one lakh votes. Captain, who was the Punjab Congress President from the 2015 to 2017 assembly elections, is to the credit of winning 77 of the 117 assembly seats in the state. The slogan of the Congress was, ‘Chahunda Hai Punjab Captain Di Sarkar’(Punjab wants Capt. government), and the second innings of Captain as the 15th Chief Minister of Punjab was over six months early in four and a half years.