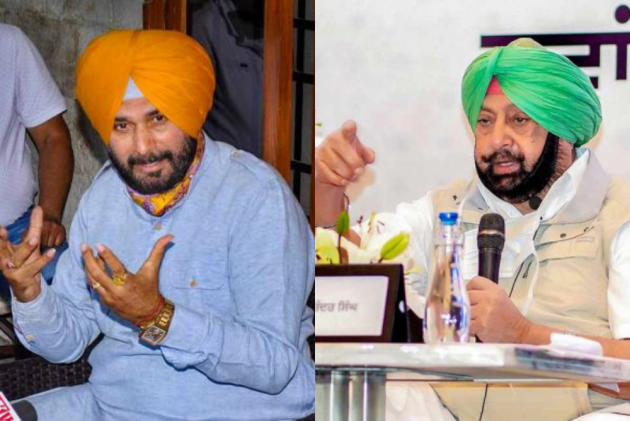 A veteran of many political battles, Punjab chief minister Captain Amarinder Singh surely knows how to checkmate his rivals and hold his ground. For the past few months, the political grapevine in Punjab had been abuzz with speculation that Singh’s brusque leadership style that has alienated an influential section of his party colleagues may finally force the Grand Old Party’s central leadership to clip his wings and even decide that the assembly polls due in the state next year will not be fought under his command. That Singh’s bête noire within the party, Navjot Singh Sidhu, known to flaunt his proximity to Rahul Gandhi and Priyanka Gandhi Vadra, was taking regular potshots at the CM publicly further strengthened the perception that the CM was losing his grip on the party and its government in Punjab.

However, after days of hectic deliberations by a three-member committee appointed by interim Congress President Sonia Gandhi to take stock of the party’s worsening internal feuds and suggest a way of diffusing the tensions, it seems Singh has, once again, emerged largely unscathed. In contrast, Sidhu, who was until last week touted as the biggest likely beneficiary of this apparent mechanism to rein-in the Punjab CM, now stands isolated. Outlook has learnt that several Congress legislators who otherwise have reservations against the Captain’s working style made it clear to the three-member panel headed by Congress leader Mallikarjun Kharge that they “do not trust” Sidhu and would rather “prefer to continue working under Singh” if their personal grievances are addressed.

Over two dozen of the party’s MLAs had red-flagged a litany of complaints against Singh. Several leaders who participated in the consultative process confirmed to Outlook that these legislators have “made it known that it would be suicidal for the Congress to replace Singh as chief minister” ahead of the assembly polls. Several of these disgruntled legislators have also conceded to the Kharge-led panel that Singh must lead the Congress’s election campaign next year and that their “limited grouse against the CM was largely procedural and can be addressed without upsetting the power equations in the state”.

The Punjab chief minister will make some concessions over the next month by way of a reshuffle of both his cabinet and the party’s state unit. Sources privy to the high-level parleys say these concessions would largely aim to send out two broad messages – first, that Singh continues to be a disciplined soldier of the party who is deferential towards the wishes of his central leadership (read: the Gandhis) and second, that he is “not an unreasonable leader” and is open to accommodating his trenchant critics if this serves the interest of the Congress moving forward. In reality though, these would have little impact on Singh’s hold over the party in Punjab.

“There were a few common grievances that the legislators had, namely that the CM is not equally accessible to all party MLAs and runs the government through a coterie of bureaucrats who in turn are neither receptive of suggestions coming from MLAs nor civil in their interactions with them,” a senior party leader told Outlook. The leader said that these issues were discussed at length with the CM who assured correctives at the earliest.

Sources said Singh also agreed to the proposal for revamping the Congress organisation in Punjab. “The organisation at all levels in the state has largely been defunct. Singh agreed that this needs to change and several of the dissenting leaders can be accommodated in the organisational reshuffle that will happen soon. Of course, the blueprint of the reshuffle will be finalised by Singh, in consultation with other party leaders in the state and the centre,” a member of the committee told Outlook.

Another party veteran who was not part of the three-member panel but was involved in back-channel talks between Singh and his rivals told Outlook that “the only proposal for a change in leadership and to give a greater role and say to Navjot Singh Sidhu in the running of the government and the party came from Sidhu himself.” The leader added that Sidhu “stood totally exposed” at the committee’s meetings because “not one MLA supported Sidhu for an enhanced leadership role in Punjab.”

Congress sources say there is some merit in Singh’s “calculated sidelining of Sidhu”. Many within the party, including some of the Captain’s rivals, believe that the cricketer-turned-politician’s grouse is “driven by personal motivations and not ideological convictions or a commitment to the party.”

A senior Punjab Congress leader told Outlook that ever since Sidhu resigned from the Amarinder Singh cabinet over a year ago, the Amritsar MLA has “constantly lobbied for various posts and only when that strategy failed to yield any results, he began raising issues like the sacrilege case and Singh’s alleged attempts at shielding the Badals (the first family of the Congress’s main political rival – the Shiromani Akali Dal) against any action in cases of corruption and other wrongdoing.” The leader further explained that over the past year, Sidhu’s demands have ranged from his reinstatement in the Punjab cabinet with the portfolio of urban local bodies to an elevation as Deputy CM and finally as the state Congress president.

Congress sources say that Sidhu’s proximity to Rahul Gandhi and Priyanka Gandhi Vadra along with the undeniable influence that he has over a segment of the state’s young voters has made it difficult for the party to ignore his broadside against the CM. However, with little backing within the party’s legislative group and the Congress’s history of not having Jat Sikhs – the cast that both Singh and Sidhu belong to – simultaneously hold both posts of CM and PCC president, there is little chance of the former cricketer taking command of the party’s state unit ahead of the assembly polls.

An olive branch, suggested by some party leaders, with the hope of ending the public sparring between Singh and Sidhu is to elevate the latter as Deputy CM. “The role of a deputy CM is largely symbolic because the post per se doesn’t give its holder any powers that are greater than other cabinet ministers. Sidhu also knows this but since he has already exposed himself, he can’t return to Punjab with nothing to show as result for his prolonged broadside.” The hurdle for effecting this change, though, is Singh’s continuing refusal to rope in Sidhu as his deputy. Singh has made it clear that Sidhu “doesn’t deserve the deputy CM post and is not fit to be PCC president” but that, in the interest of keeping the party united, he is willing to re-induct the rebel leader as a minister.

The Congress high command is expected to speak to Singh again and attempt to convince him to be more accommodative of Sidhu. Sonia, say sources, still continues to rely on Singh’s political instincts in Punjab but her children, Rahul and Priyanka, don’t. Singh will turn 80 ahead of the Punjab elections and has made it clear that he has no intention of hanging his boots anytime soon.

The Gandhi siblings may have shown Singh that they run the show in the party at the central level by subjecting the CM through the embarrassment of coming to Delhi to defend his position. However, the Maharaja of Patiala, perhaps the only Congress leaders across India who publicly calls the Gandhi siblings by their first names without any deferential prefix or suffix, has also made it clear to the Rahul-Priyanka duo that in Punjab, it is his writ that still runs large over the Congress.