Eight persons were killed in UP's Lakhimpur Kheri yesterday after an SUV rammed into protesting farmers who in turn set fire to the vehicle. 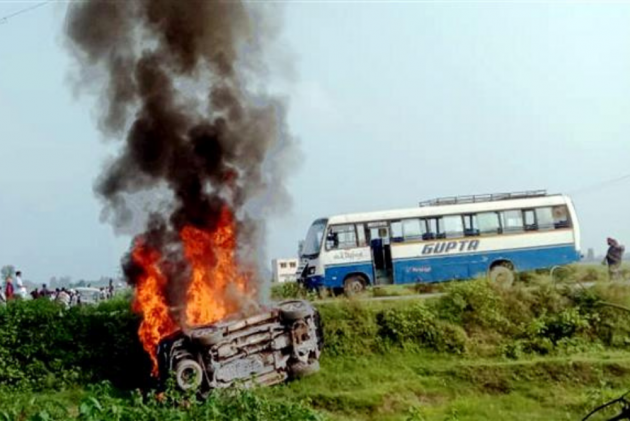 The violence at Lakhimpur Kheri on Sunday left at least eight persons dead including farmers and BJP workers.  The incident occurred following farmers' agitating over Deputy Chief Minister Keshav Prasad Maurya's visit to the site. As per reports, Two SUVs were set on fire by angry farmers, reports said, after they hit a group of farmers.

Following the incident, Congress general secretary Priyanka Gandhi Vadra and other party leaders reached Lakhimpur border early Monday, but alleged they were not allowed to meet the victims of the violence that erupted during a farmers' protest and claimed eight lives a day earlier.

Priyanka Gandhi, who is accompanied by party leader Deepender Singh Hooda among others, had to take alternative routes to reach the bordering Hargaon area in Saitapur as heavy security was deployed on the main roads amid tension in the violence-hit region of Lakhimpur.

“We are waiting outside Lakhimpur Kheri. We have been prevented by the police from entering. We have come here to meet the victims of the violence,” Congress national secretary Dheeraj Gurjar said at 4.30 am.

Priyanka Gandhi's convoy was earlier briefly stopped by the Uttar Pradesh Police officials in Lucknow, where the Congress general secretary had arrived on Sunday night, within a few hours of violence being reported during an anti-farm laws protest here.

Not just Gandhi, according to reports, Chhattisgarh Chief Minister Bhupesh Baghel as well as Punjab Deputy Chief Minister Sukhjinder Singh Randhawa were denied entry into Lucknow when they landed at the airport on Monday morning.

Opposition Samajwadi Party leader Akhilesh Yadav was reportedly put under "house arrest" in Lucknow ahead of his scheduled visit to Lakhimpur Khedi.

As per reports, farmers have lodged an FIR against Union Minister of State for Home, Ajay Mishra Teni and his son Ashish Mishra Teni in Tikunia.

Meanwhile, mobile internet services were suspended in parts of the violence-hit district, where restrictions under CrPC section 144 -- which prohibits assembly of four or more people -- has also been imposed, according to officials.

The UP police took to Twitter early Monday to describe the incident as “unfortunate” and said eight casualties have been reported so far as per the district administration.

“ADG LO, ACS Agriculture, IG Range & Commissioner are on the spot & situation is under control. Adequate deployment has been done to prevent any untoward incident,” it added.

Meanwhile, Punjab Chief Minister Charanjit Singh Channi condemned the violence. Expressing deep anguish at the tragic incident, Channi said the "ghastly and inhuman act" must be condemned by all in the strongest possible words, according to a statement.

Channi urged his counterpart in Uttar Pradesh, Yogi Adityanath, to bring the culprits to book so as to ensure justice to the victim families.

Four of the dead were travelling in the vehicles and the remaining four were farmers.

What happened at Lakhimpur Kheri?

The farmers had assembled there to oppose Maurya's visit to Banbirpur, the native village of Union Minister of State for Home and MP Ajay Kumar Mishra.

The violence broke out after two SUVs allegedly ran over a group of anti-farm law protesters.

Farmers alleged that the Union minister's son was in one of the vehicles, a charge denied by Mishra.

“Thorough probe needed into the Lakhimpur Kheri incident. Justice must be ensured for the victims of the violence. Violence or provocation of violence is no solution to any problem.': @capt_amarinder,” tweeted Amarinder's media adviser.

Meanwhile, Aam Aadmi Party MLA and Leader of Opposition in the Punjab Assembly, Harpal Singh, Cheema condemned the incident and said the culprits should be immediately put behind bars.

He demanded that the farm laws should be repealed immediately.

"It seems the government is trying to protect the son of a Union minister of state, which is shocking and condemnable," said Badal in a statement.

The Union Home Ministry should direct the Uttar Pradesh government to provide justice to the families of dead farmers immediately, he said.

"No one is above the law … FIR under sec 302 IPC must be registered against Union Minister's son for murder of innocent farmers, he should be immediately arrested and put behind the bars for this barbaric act !!," tweeted Sidhu.

Congress MP Partap Singh Bajwa also demanded the registration of a case against the son of the Union minister.

"All perpetrators including the MoS Home's son should be booked for murder, for crushing the protesting farmers. Anything less than that would be a gross miscarriage of justice," said Bajwa in a tweet.