All the 22 farm organizations were a part of the umbrella organization Samyukta Kisan Morcha (SKM) which spearheaded the year-long protest against Centre's three farm laws. 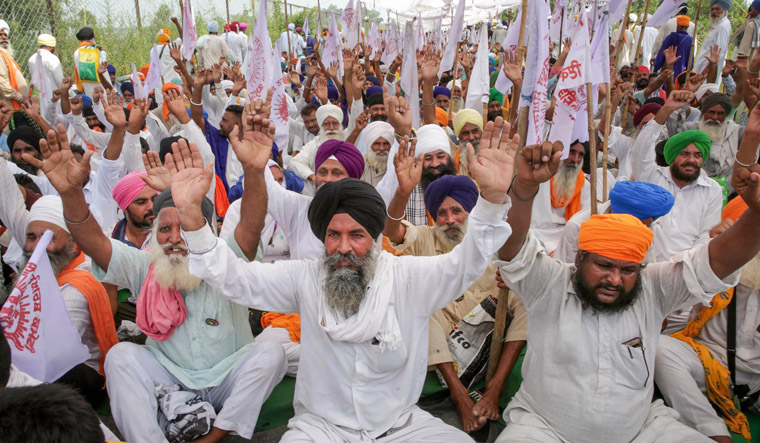 Twenty-two farm organisations in Punjab that belonged to the umbrella organization Samyukta Kisan Morcha (SKM) and actively participated protest against Centre's three farm laws, announced a political front on Saturday adding that they would contest the upcoming Punjab Assembly Polls, 2022 to bring in a "political change".

The decision in this regard was taken by representatives of these organisations here.

These 22 farm bodies were among 32 farmer organisations in Punjab which participated in the over-a-year-long protest against the three central farm laws.

However, the Samyukta Kisan Morcha (SKM), which had led the farmers' stir against the laws, clarified that it is not contesting the assembly elections.

Talking to reporters here, farmer leader Harmeet Singh Kadian said the Samyukt Samaj Morcha has been set up for fighting the Punjab polls due early next year.

The SKM was formed with various bodies having different ideologies and "we returned after fighting a battle after more than a year", he said while referring to the central laws which were repealed in the recently concluded Winter Session of Parliament.

"The kind of welcome we received in Punjab and the expectations of the people from us has increased," said the Bhartiya Kisan Union (Kadian) leader.

"There is a lot of pressure from the cadre and others on us, and said they if you can win that 'morcha', then you could do something for the betterment of Punjab," Kadian said.

"We are coming out with a new morcha Samyukt Samaj Morcha," he said.

Kadian claimed that three more farm bodies, including the BKU (Dakaunda) and the BKU (Lakhowal), have supported this decision but they are holding their own meetings.

"On the call of the people of Punjab, we brought this 'morcha', which is ready to fight all the 117 (assembly) seats (in the state)," he said.

"We also give an open invitation to other bodies to join us to build a new Punjab," Kadian said.

Balbir Singh Rajewal of the Bhartiya Kisan Union (Rajewal) will be the leader of the Samyukt Samaj Morcha, he said.

Farmer leader Baldev Singh said the farmer bodies are entering politics while keeping in mind the expectation of the people.

"We will give a new direction to Punjab," Singh said and added that problems and issues like illegal sand mining and drug menace were not being addressed by political outfits.

"We assure the people of Punjab that they repose faith in us and we will work towards resolving their issues like curbing drug menace and stopping youth from going abroad," Singh said.

Reacting to the farmer bodies' decision of entering politics, Rajewal said it was the demand and "enormous pressure" of the people from Punjab to take this decision.

This decision has been taken to give a "political change", he said.

The Samyukt Samaj Morcha will fight all the 117 assembly seats, Rajewal said.

"There is a need to change the degraded system in the state," he said while appealing to the people not to fall prey to statements of traditional political parties.

Asked if the 'morcha' (Samyukt Samaj Morcha) will enter into an alliance with the Aam Aadmi Party, which is the main opposition party in Punjab, Rajewal said no decision has yet been taken.

This is not a political party but a 'morcha', said Kadian while dubbing it as "a new dawn".

On the SKM deciding not to contest the assembly polls, Sandhu said the SKM comprised 475 organisations while Punjab had 32 farm bodies.

He said they are not using the SKM's name for fighting the polls.

SKM leaders Darshan Pal and Jagjeet Singh Dallewal in a statement said that it was not contesting the Punjab assembly elections.

They said that the SKM, which is a platform of more than 400 different ideological organisations across the country, was formed only on the issues of farmers.

There is no call for the boycott of elections and even no understanding of contesting elections, the SKM leaders said, adding that it was made by the people to get their rights from the government and after the repeal of the three laws, the struggle has been postponed.

The laws were repealed by Parliament on November 29, but farmers continued their protest over their pending demands such as a committee for legal guarantee for MSP and withdrawal of police cases against farmers, among others.

The status of remaining demands will be decided in a meeting on January 15, the SKM leaders said in the statement.

Regarding 32 organisations in Punjab, they said that there was no consensus on going jointly in this assembly election.

It has been decided that the individuals or organisations participating in the elections cannot use the names of the SKM or 32 organisations, the leaders said.

Doing so will result in disciplinary action, they warned in the statement.