Punjab Farmers Elated Over Poll Outcome, Plans To Hold All-India Convention On May 10

Farmers attribute the defeat of BJP to the role played by prominent leaders who had addressed well-attended mahapanchayats to garner support for the repeal of the three new central agriculture laws. 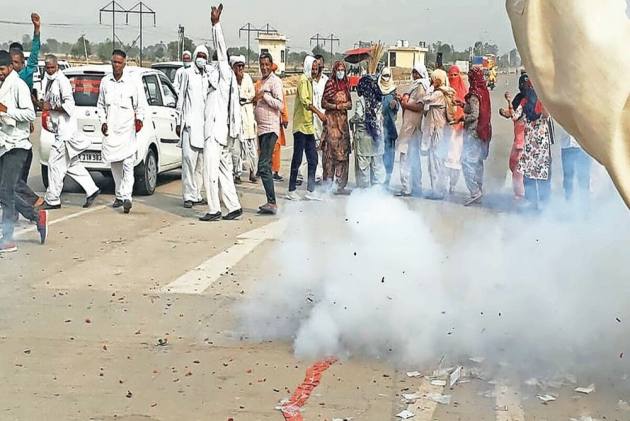 Farmers in Punjab and Haryana are rejoicing that the national ruling party led by the BJP did not make expected gains in West Bengal state elections. They attribute the outcome in part to the role played by more than half a dozen prominent farmer leaders who had addressed well-attended mahapanchayats to garner support for the repeal of the three new central agriculture laws.

Six months into the agitation against the three laws and demand for making the minimum support price (MSP) mandatory for all 23 farm commodities for which it is fixed, there are no plans to withdraw, stress farmer leaders.

Of course, the number of farmers agitating near the Delhi borders has declined to around one-third of what it was at the beginning of this year. The harvest activities, sale of farm produce and the second wave of Covid and resultant partial lockdown have all contributed to the lower numbers visible along the highways to Delhi, says Gurnam Chaduni of Bharatiya Kisan Union.

TMC Set To Storm Back To Power In West Bengal

“With the harvest and post-harvest activities almost over in Punjab, Haryana, and some of the neighbouring states, many farmers have started arriving back to the agitation sites near the national capital,” says Chaduni, happy at the political outcome in West Bengal.

Government procurement of wheat and paddy is almost over in Punjab and Haryana. There is however disquiet that the procurement process has been stopped in 9 Zilas in Punjab, resulting in farmers not getting the right price for their produce. Farm leaders point out that apart from these areas in Punjab, even in Rajasthan and Madhya Pradesh, farmers having to sell in mandis are getting only Rs. 1700 per quintal as against the declared MSP of Rs. 1975 for wheat. There is also the problem of late sales and delayed payments, farmers state.

Krisna Prasad of All India Kisan Sabha shares that there are plans to hold an all-India convention of farmers on May 10, where both physical and online participation is being planned for larger participation. One main agenda for the convention is to map out future action plans as the government has so far shown no inclination to reopen talks with the agitating farmers.

“The agitation was almost at a standstill for some days due to the state elections, harvest and post-harvest activities, and the Covid lockdown in some places. We are however happy that the agitation has crossed six months, which was not expected. Given the election outcome, the farmers' agitation has got political connotations,” says Prasad.

He underlines that the present crisis due to shortages of Covid vaccines and the black-marketing of Covid medicines and oxygen has brought to fore the dangers of deregulation of the Essential Commodities Act under one of the new laws. What is now being witnessed in the case of vaccines and Covid emergency medicines could well come to pass in the case of food availability and the price people have to pay, the farm leader warns.

Though some media reports claim a higher incidence of Covid cases among the agitating farmers, farm leaders clarify that the number of positive cases among those still at the borders to Delhi is in no way higher than in other parts of NCR as social distancing norms, hygiene and other protocols are all being adhered to by the farmers. As against 8-10 or even more people in each tractor trolley or tent along the highway, there are hardly 2-3 agitators in each tent or vehicle occupied by the agitators. Even so, all safety precautions are being taken, the farm leaders' emphasis.