The farmer organisations’ representatives also announced to continue their 'rail roko' agitation against the three agri laws despite an appeal by Chief Minister Amarinder Singh. 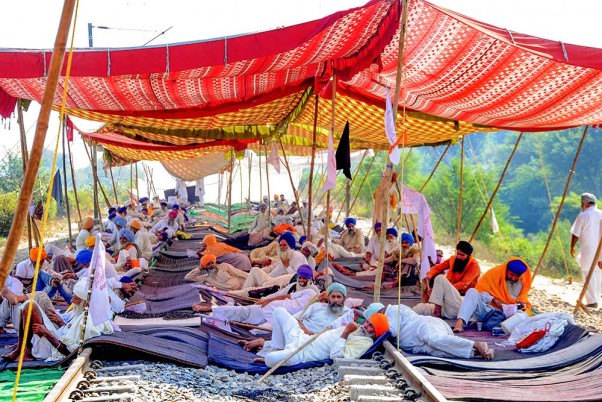 Punjab's several farmers' bodies on Wednesday rejected the Union agriculture department's invitation for a meeting over the new farm laws, saying an officer does not have to tell them if these laws are beneficial for them.

The agitating farmers’ bodies, however, said they are ready for talks if a proper invitation comes to them from the Central government.

The farmer organisations’ representatives also announced to continue their 'rail roko' agitation against the three agriculture laws of the Centre despite an appeal by Chief Minister Amarinder Singh to ease it to allow goods trains to pass through the state.

What Corporatization Did To Agrarian Societies Of World?

They also gave an ultimatum to the chief minister to convene a special session of the Punjab assembly for passing a resolution to reject these farm-related laws within a week otherwise, they said, they would ghearo Congress leaders and government representatives.

Different farmers' bodies have been holding state-wide protests against the new farm laws.

The farmers' oganisations rejected the Centre's invite to talk to it saying an officer does not have to tell them if the three central laws are beneficial for them.
“We reject the letter of invitation for a meeting coming from an officer (secretary) of the Agriculture Department. We are not going to talk to any officer. We are ready for talks provided a proper and written invitation comes from the Central government,” said a representative of a farmers' organisation.

Farmers said a secretary-rank officer of the Union Agriculture Department had invited five to six farmers' leaders to participate in a “conference to address their concerns” on October 8 at Delhi.

“If an officer wants to tell us about the benefits of these laws, we are not going to hear it as we know these legislations are against the farming community,” said Jagmohan Singh, general secretary of Bhartiya Kisan Union (Dakunda).

When asked about Chief Minister Amarinder Singh's appeal to ease their ‘rail-roko’ stir, farmers' leaders said they would continue with it.

“We are farmers and we know farming practices very well. We know when DAP or urea is needed,” another farmers' leader said.

“Electricity is being purchased from outside and the paddy sowing season is already over,” he added.

Farmers, however, said they would consider the CM's appeal in the next meeting on October 15.

Amarinder had urged protesting farmers to ease their rail blockade to ensure that the state is able to meet its critical needs.

Due to the prolonged blockade of goods trains, the situation at Punjab's coal plants was critical and they were left with only five to six days of coal, the CM had said.

He had also said that with not a single fertilizer rake entering Punjab for the past one week, there could be a severe shortage of fertilizer for the use by farmers for sowing the wheat crop.

Farmers asked the CM to fulfil his “promise” of holding a special session of the Punjab Vidhan Sabha for passing a resolution against these legislations.

Giving an ultimatum to the CM, they said they would gherao Congress leaders and representatives of the government if the resolution is not passed within a week.

Farmers' leaders also announced to block roads for two hours on October 9 in protest against the lathi-charge on agitating farmers in Haryana.

Meanwhile, 30 different farmers' bodies asked BKU (Lakhowal) not to attend their joint meeting until they withdraw their writ petition filed against farm laws in the Supreme Court.

At present, farmers continued to block rail tracks at 33 places in the state. Besides, they have also staged sit-ins outside several petrol pumps, toll plazas, and shopping malls.

They are also staging 'dharnas' outside the houses of some BJP leaders.

Farmers said they would continue their agitation till their demand for revocation of farm laws was not accepted.

Farmers have expressed apprehension that the Centre's farm reforms would pave a way for the dismantling of the minimum support price system, leaving them at the "mercy" of big corporates.

President Ram Nath Kovind had given assent to the three contentious bills – the Farmers' Produce Trade and Commerce (Promotion and Facilitation) Bill, 2020; the Farmers' (Empowerment and Protection) Agreement of Price Assurance and Farm Services Bill, 2020 and the Essential Commodities (Amendment) Bill, 2020.