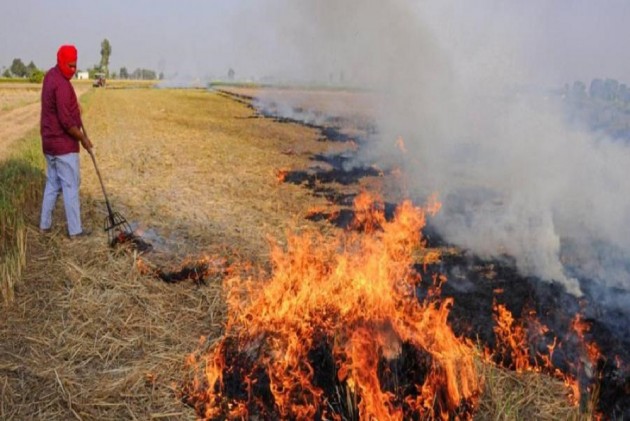 Punjab recorded the highest number of stubble burning incidents this year, registering an increase of 46.5 per cent as compared to last year, according to the Central Pollution Control Board.

However, Haryana saw farm fire incidents reducing by 28.6 per cent this year.

Every year at the onset of winters, crop residue burning or stubble burning begins in Punjab and Haryana leading to heavy air pollution in Delhi.

In 2020, districts such as Sangrur, Bathinda and Firozpur continue to be the highest contributor to active farm fire events in comparison to 2019, it said.

In 2020, districts such as Moga, Amritsar, Fazilka, Ludhiana have shown more than 75 per cent increase in their number of fire counts in comparison to 2019.

"In 2020, all the districts of Punjab except SBS Nagar have shown an upward trend in their active fire events contribution," the CPCB said, adding it showed lack of ground-level implementation of the Central supported scheme.

The maximum contribution of external biomass burning to PM 2.5 at 42 per cent was observed on November 5, 2020.

"With the support of central government schemes initiated to stop stubble burning, about 28.6 per cent (1876 incidents) of stubble burning reduced in 2020 in comparison to 2019," the CPCB said.

In 2020, districts such as Fatehabad, Kaithal and Karnal continue to be major contributors to farm fires but still have shown reduction by 40 per cent in comparison to 2019, it said.

Districts such as Palwal and Kurushetra have shown major reduction by 50-60 per cent this year in comparison to 2019, it said.

The pollution watchdog also said that under the central government scheme ''Promotion of Agricultural Mechanization for In-Situ Management of Crop Residue in the States of Punjab, Haryana, Uttar Pradesh and NCT of Delhi'', funds worth Rs 1178.47 crores were released from 2018-2020 and it has been approved for continuation during 2020-21 with Rs 600 crores.

Union Environment Minister Prakash Javadekar had earlier said that the central government's PUSA institute has demonstrated a bio-decomposer technology which converts stubble to manure and is being experimented on a pilot basis in five states including Delhi and its trial is on.

"It will help in dealing with crop residue and is cheap as well. In the future, there will be several ways, both in-situ and ex-situ, to fight against the problem of pollution emerging out of stubble burning," he had said.

Delhi Environment Minister Gopal Rai had on Tuesday said that a 15-member impact assessment committee has ascertained the effectiveness of "Pusa bio-decomposer" solution in reducing stubble burning in the capital and it was submitted to the Environment Ministry's Commission for Air Quality Management in National Capital Region and Adjoining Areas on Monday.