Quad is to checkmate China’s growing profile as a nation giving humanitarian aid to nations across Asia and Pacific, and it wants to challenge China’s soft power bid in the region. 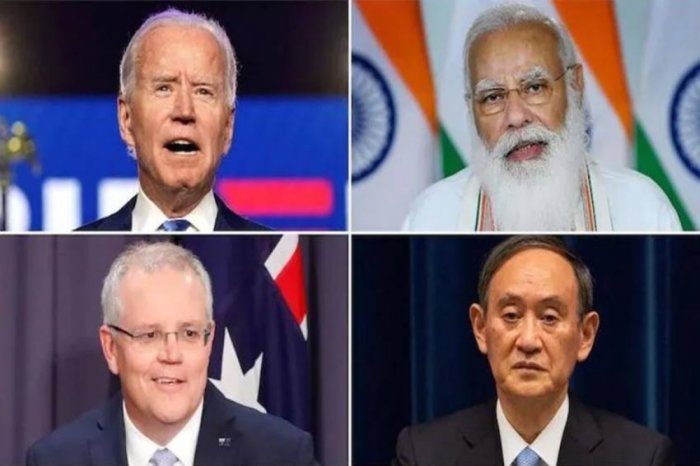 The first in-person summit meeting of the Quadrilateral Security Dialogue has generated much talk across the world.

At the invitation of US President Joe Biden, India’s Prime Minister Narendra Modi, Japan’s Yoshihide Suga, and Australia’s Scott Morrison all gathered at the White House on Friday to take stock of this recently revived group primarily meant to check a rising China’s unfettered growth in Asia.

Though none of the four Quad members ever mention China and instead frequently refer to a free and open Indo-Pacific, peaceful resolution of disputes, democratic values, and territorial integrity undoubtedly to checkmate the increasingly assertive Communist dragon.

There was much heartburn among sections in India, when Australia, UK and the US (AUKUS) announced a trilateral defence agreement on September 15.

Critics said this move by the three English-speaking countries has made the quad superfluous, a symbolic gathering of democracies with little effective role.

But the Modi-government had no such doubts and as AUKUS suits New Delhi’s larger strategic interests. India does not want to be part of any defence pact which may in future limit its choices.

Foreign minister Subramanyam Jaishankar had often said that India will not limit itself to one bloc and work with various countries with which it may have common views on certain issues, but may differ on others.

India will cooperate in somethings with the US, Russia or Iran and EU but may not find common ground on all issues.

Here is what Quad is all about:
1. Quad not a military or defence grouping like AUKUS but has just as important a role.

2. Ramp up Covid-19 vaccine manufacturing and supply to low and middle- income countries.

3. Fight China’s Belt and Road Initiative on infrastructure building with a more viable and transparent alternative.

4. Establish secure supply chains, so that the world does not face disruption by China. At the moment manufactures look to China for essential components. That reliance must gradually be minimised.

6. India happy not to be part of any military alliance, and has no problems with AUKUS.

As a defence allay India can be compelled to join the war efforts of the side it has signed on to. This move will allow India retain its strategic autonomy, though that particular phrase is anathema to the current regime. However for all purposes not being part of a military alliance gives India the space to manoeuvre.

The tripartite agreement will help Australia to get nuclear submarine technology from the US and UK. Australian Navy will add eight new nuclear submarines to their fleet and play a pivotal role in checking China in the Indo-Pacific waters.

The heartburn in India is also due to the fact that New Delhi had long asked for nuclear submarine technology from the US, but so far despite signing the foundation defence agreements with the US, there has been no forward movement in regard to transfer of sensitive high-technology. Washington has shared nuclear submarine technology only with the UK with which it enjoys a special relationship and now with Australia.

Concerned about China’s bid to overtake the US as the world’s number one power, Washington which had since the 1972 path-breaking Nixon visit to Beijing, helped China’s economic growth, with American companies setting up shop there, is now ready to thwart Beijing’s moves not just militarily but in providing alternatives to infrastructure development and transparent economic arrangement to the Indo-Pacific nations.

This is where Joe Biden wants the Quad to play a significant role. Though the four Quad members took part in the Malabar naval exercises, it is not a defence arrangement. Its scope is much wider. It is to checkmate China’s growing profile as a nation giving humanitarian aid to nations across Asia and the Pacific. The Quad wants to challenge China’s soft power bid in the region. This is why there is so much emphasis on providing vaccines to countries in the region.

India started its vaccine diplomacy well and was competing with China to provide doses to the world. India sent in its first lot to its neighbours. But the deadly second wave upset the plans as the government struggled with the health crisis at home. China has provided vaccines across the Indo-Pacific. India is now getting ready to restart vaccine exports.

COVID response was an important element of the Quad summit. “We launched the Quad Vaccine Experts Group, comprised of top experts from our respective governments …to support Indo-Pacific health security and COVID-19 response. … aligned our efforts to combat it, reinforced shared diplomatic principles for mitigating COVID-19 in the region, and actively improved coordination of our efforts to support safe, effective, quality-assured vaccine production and equitable access, in close collaborations with multilateral efforts including the COVAX Facility,’’ the joint statement released after the meeting said.

In addition, Australia, India, Japan, and the United States have pledged to donate more than 1.2 billion doses globally of safe and effective COVID-19 vaccines. And to date, the Quad had delivered nearly 79 million doses to countries in the Indo-Pacific. India’s Biological E Ltd is being funded by the quad partners to ramp up its manufacturing capacity. Quad will coordinate with the UN’s COVAX facility to send out vaccines to low- and middle-income countries in the region.

Climate change and building secure clean energy supply chains is another priority of the quad. The group is committed to building quality infrastructure and since 2015, quad partners have provided $48 billion for financing projects in the region.

The group has established cooperation on critical and emerging technologies, to ensure the way in which technology is designed, developed, governed, and used is shaped by our shared values and respect for universal human rights. Also in partnership with private industry, the Quad will “advance open, and transparent 5G and beyond-5G networks, and working with a range of partners to foster innovation and promote trustworthy vendors...,” the statement added. Simply put the Quad will work to challenge dominance in these issues. 5G networks developed by Chinese companies like Huawei will face stiff competition.

Quad remains a work in progress. Yet one thing is clear it is not an exclusive club and wants to work with a range of partners, always keeping in mind ASEAN centrality.