The US and Japan will provide financial aid to set up additional Covid-19 vaccine production capacities in India while Australia will contribute to the last mile logistics, foreign secretary Harsh Vardhan Shringla said 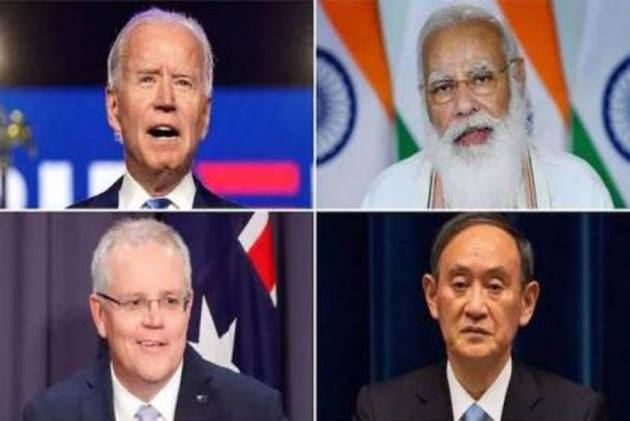 In their first ever summit, leaders of the US, Japan, Australia and India finalised on an agreement to ensure that India is able to export a billion Covid-19 vaccines by 2022. The initiative was finalised during the first Quad summit that was held late on Friday. During the summit it was agreed that India will export the coronavirus jabs to the Indo-Pacific region. The move is seen as a step to tackle China’s expanding vaccine diplomacy.

The summit marked the first meeting at the highest political level between leaders of the four nations. The Quad is a coalition of democracies centred around the Indo-Pacific. Many believe that the coalition, at its core, is the first attempt by the four democracies to push-back against China’s rise.

In his opening remarks at the virtual summit, Modi said the four-nation Quad has come of age and its agenda covering areas like vaccines, climate change and emerging technologies makes it a force for global good.

"We are united by our democratic values, and our commitment to a free, open and inclusive Indo-Pacific. Our agenda today - covering areas like vaccines, climate change and emerging technologies - makes the Quad a force for global good," he said.

In his comments, Biden said the Quad is going to be a vital arena for cooperation in the Indo-Pacific. "A free and open Indo Pacific is essential to each of our futures,” Biden told the meeting from the White House.

In a media briefing, Foreign Secretary Harsh Vardhan Shringla, referring to the vaccine initiative, said the aim is to produce a billion doses of vaccines by the end of 2022.

He said the financing for creation of additional production capacities in India will come from the US and Japan while Australia will contribute to the last mile logistics and delivery issues.

"In today's context it is one of the most important initiatives. We are talking about huge investments in creating additional vaccine capacities in India for exports to countries in the Indo-Pacific region for their betterment. We are talking about producing a billion doses of vaccines by the end of 2022," he said.

After the summit, Modi tweeted: "United in our fight against COVID-19, we launched a landmark Quad partnership to ensure accessibility of safe COVID-19 vaccines. India's formidable vaccine production capacity will be expanded with support from Japan, US & Australia to assist countries in the Indo-Pacific region."

Asked whether the situation in eastern Ladakh figured in the talks, the foreign secretary said there was a discussion on regional issues important to the Quad member nations but declined to give the details saying the nature of the discussions were confidential.

"There was a commonality of views on these issues. Constructive discussions will continue," he said.

It is learnt that the situation in eastern Ladakh figured in the summit during discussions on regional issues and Quad leaders appeared supportive of India's position on it.

Shringla said Quad does not stand against anybody and its approach is positive.

"Quad is an organisation that is working towards a very positive agenda,” he said.

In a joint statement titled 'The Spirit of the Quad', the leaders said “we pledge to strengthen cooperation on the defining challenges of our time" and said they will continue to prioritise the role of international law in the maritime domain and facilitate collaboration, including in maritime security, to meet challenges to the rules-based maritime order in the East and South China Seas.

Referring to situation in Myanmar following the coup, the Quad leaders emphasised the urgent need to restore democracy and the priority of strengthening democratic resilience.

In the summit, the leaders decided to establish a vaccine expert working group to implement path-breaking commitment to safe and effective vaccine distribution.

They also decided to launch a critical- and emerging-technology working group to facilitate cooperation on international standards and innovative technologies of the future. A separate working group will be set up on issue relating to climate change.

"The ambition of these engagements is fit to the moment; we are committed to leveraging our partnership to help the world's most dynamic region respond to historic crisis, so that it may be the free, open, accessible, diverse, and thriving Indo-Pacific we all seek," the joint statement said.

Following the summit, Prime Minister Modi described the discussions as "fruitful" and said he reiterated India's commitment to a free, open and inclusive Indo-Pacific in line with the country's vision of SAGAR - Security and Growth for All in the Region.

"Our discussions today on vaccines, climate change, and emerging technologies make the Quad a positive force for global good and for peace, stability and prosperity in the Indo-Pacific," he tweeted.

In their joint statement, the Quad leaders noted that the global devastation wrought by Covid-19, the threat of climate change, and security challenges facing the region "summon us with renewed purpose".

The Quad leaders also agreed to hold an in-person meeting later this year.