A 15-year-old girl went missing from her tuition on September 7. She was traced and brought back with consistent efforts of AAP MLA and his team. 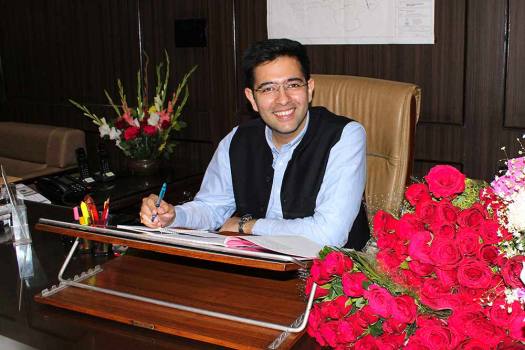 A man’s frantic search for his missing daughter bore fruit when he got in touch with AAP MLA Raghav Chadha’s office.

Abhigyan (name changed) knew something was wrong when his 15-year-old daughter did not return from her tuition till late on September 7.

He went to her tuition class at Rajender Nagar in central Delhi, but could not find her there.

Abhigyan desperately called all her friends and after some hesitation, one of them told him that his daughter had gone with a man who had been following her for more than a week.

He claimed that he approached the police and but they were of not much help initially. He said he had to make several rounds of the police station to gain access to the CCTV footage which showed that his daughter was taken to Bihar by bus.

"An FIR was registered by the police and through the CCTV footage, I saw that the man took my daughter to Bihar by a bus. I was aghast and did not know how to proceed further,” Abhigyan said.

It was then that the man contacted Rajender Nagar MLA Raghav Chadha's office and sought help for tracing his daughter.

"I received immediate help from the MLA's office. The MLA himself made daily calls to the SHO for updates," Abhigyan said.

Commenting on the incident, the AAP MLA said he would extend all possible help to the residents of his constituency.

"A parent whose child goes missing goes through unimaginable pain. It will always be my first and foremost endeavour to prevent any such situation from even arising, and wherever possible, extend my help, deploy my team to ensure a family is reunited.

“It is my duty and responsibility to help the people who elected me, especially a parent in distress. I am happy we could help a family become one again," Chadha said.

Abhishek, working with Chadha's office said, "As soon as we were intimated of the incident, we spread the word and contacted the anti-trafficking NGO network."

Advocate Akash Chatterjee, who pursued the case, said an application was filed in the court under relevant sections of the Criminal Procedure Code, following which the police was directed to submit the Action Taken Report.

Everyone's relentless efforts bore fruit when on the evening of October 2, Abhigyan received a call from the police that his daughter had been traced and was being brought home.

When Abhigyan finally met his daughter on October 3, he said she was trembling with fear.

"All I wanted was to comfort my daughter and tell her she has nothing to fear for she has done nothing wrong," he said.

While the man is relieved that his daughter is finally home, he hopes the man who took her away is brought to justice.