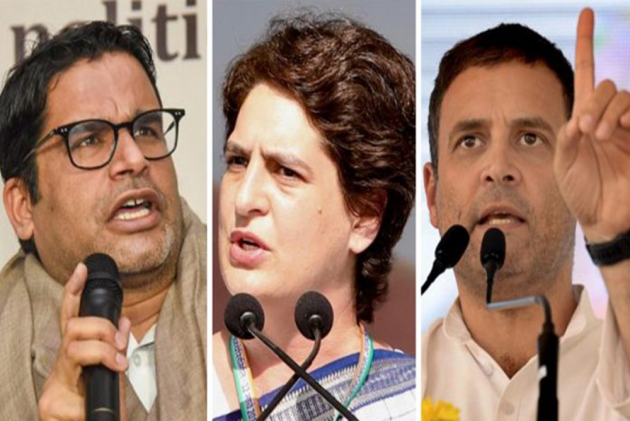 For a party that’s constantly ridiculed for its organisational inertia and fading electoral relevance, the Congress, or at least its high command, sure knows how to ride the headlines. Even before the cacophony of journalistic guesswork over the turmoil within the party’s ranks in Punjab, Rajasthan, Chhattisgarh, Haryana, and other states could end with some clarity on the fate of warring factions, the Congress’s first family, on July 13, triggered an even louder political hubbub over their sudden meeting with election strategist Prashant Kishor.

Kishor, who until a fortnight ago was being projected by a section of the media as the Grand Wazir employed by NCP supremo Sharad Pawar to explore the prospects of a Congress-less federal front against the BJP, held an over two-hour-long meeting with Rahul Gandhi and Priyanka Gandhi Vadra. Congress general secretaries KC Venugopal and Harish Rawat were also present at the meeting that took place at Rahul’s Tughlaq Lane residence. Sources say interim Congress chief Sonia Gandhi too joined the interaction through video conference.

Rawat is the party’s in-charge of Punjab where Kishor is officially engaged as political advisor to chief minister Amarinder Singh. Priyanka too has been involved with the Congress’s affairs in Punjab lately due to her confidante Navjot Singh Sidhu’s open rebellion against Singh. It was, thus, predictable speculation that the meeting between Kishor and the Gandhis, in the presence of Rawat, was in connection with the party’s continuing efforts to resolve the prolonged strife between Singh and Sidhu. The Gandhi siblings and Kishor are mum on the details of their long discussion. However, Rawat’s assertion that “Kishor didn’t meet him (Rahul) to discuss Punjab” has stirred other rumours.

Navjot Singh Sidhu Might Get A ‘More Influential Role’ In Punjab: Sources

Opposition Meet: 'Actionable Blueprint' To Take On BJP, But No Federal Front

For the record, Kishor shares a past working relationship with Rahul and is known to share a good rapport with Priyanka too. However, Kishor’s past professional engagement with Rahul is also the lone blemish in his otherwise shining résumé of successfully steering the poll management of various political parties, including the BJP during the 2014 Lok Sabha polls and more recently the Trinamool Congress and the DMK during the Bengal and Tamil Nadu assembly elections respectively.

Kishor was the Congress’s key poll strategist during the 2017 UP Assembly polls that the party unsuccessfully fought in alliance with Akhilesh Yadav’s Samajwadi Party. Though Kishor was also involved with the party’s successful election bid in the 2017 Punjab polls, the UP debacle saw Kishor making it clear that he does not wish to work for the Congress again owing to its internal machinations that prevent him from executing his ideas freely.

Earlier this year, when Kishor was engaged by Amarinder Singh as an advisor, he had maintained that the affiliation did not mark his return to the Congress’s election war room. Instead, after he helped Mamata Banerjee retain Bengal in May despite a vicious and aggressive campaign by the BJP, Kishor declared that he had decided to “quit this space (of election management)”. However, his closed-door meetings and lunches with Sharad Pawar soon after the Bengal results suggested otherwise. Amid these hush-hush interactions with Kishor, Pawar hosted leaders of eight Opposition parties for a discussion on the “current socio-political and economic situation in the country”. The absence of Congress leaders at this meet added to the gossip over the Pawar-Kishor jugalbandi working towards a third front, despite Pawar himself rubbishing such rumours.

So why then was Kishor at Rahul’s residence, speaking not just to the former Congress chief but also Priyanka and possibly even Sonia? One of the leaders present at the discussion told Outlook that discussions with Kishor were “wide-ranging and not limited to Punjab or any specific state”. Both Rahul and Priyanka also “complimented” him on his successful poll strategy that kept the BJP away from power in Bengal and “expressed a wish to engage with Kishor more proactively shortly”, the leader said. The leader, however, refused to divulge Kishor’s response or clarify whether the offer from the Gandhis was an invitation to Kishor to formally work on the Congress’s poll strategies in Punjab and beyond or for him to join the party.

Punjab goes to the polls in February-March next year. Kishor maintains that he and his election management firm, IPAC, aren’t engaged in the Congress’s poll campaign in Punjab in the way they handled the elections for Trinamool, DMK, AAP, or the YSR-Congress in the past. However, his meeting with the Gandhis at this juncture is interesting since the polls in Punjab will coincide with elections in Uttar Pradesh, Uttarakhand, Goa, and Manipur.

Priyanka, as the Congress general secretary in charge of UP, has the unenviable task of making her atrophying party battle-ready in the crucial state. Rawat, who was also present at the meeting with Kishor, is a key Congress figure in Uttarakhand where he is hoping that the party may project him as the CM face to take on the ruling BJP that has, over the past four months, changed three CMs and is battling heavy anti-incumbency.

Congress sources say it is unlikely that Kishor would take on the party’s poll management in UP or Uttarakhand considering that the assembly polls are just eight months away and his team may not have sufficient time to carry out the fieldwork necessary for finalizing a potentially winning poll strategy. Kishor is also aware that helping the Congress reverse its near non-existent poll prospects in UP with just eight months at hand is practically impossible and he wouldn’t want the Congress leaving another red mark on his election score sheet.

Does his meeting with the Gandhis then portend a more dramatic political twist? Interim Congress chief Sonia Gandhi is reportedly in the process of executing a major organisational shake-up. Could another political outing for Kishor, after his unpleasant parting with Nitish Kumar’s Janata Dal (United), be in the offing? The questions are many and the answers aren’t forthcoming, at least not yet.