The Congress president-at-large, sources say, has been angry at the “orchestrated campaign” by the party’s senior leaders who have urged him to stay on. 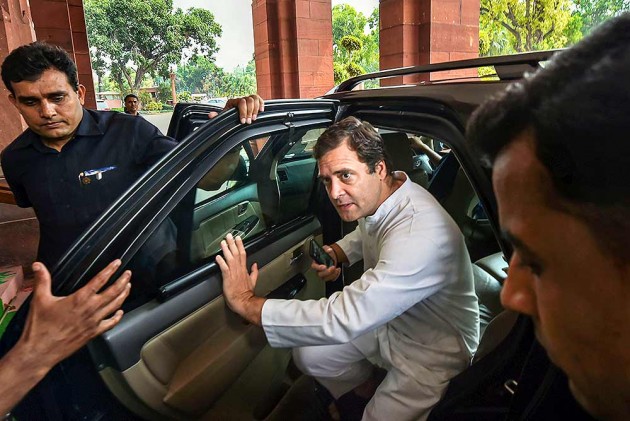 It's been over a month since Rahul Gandhi offered to resign as Congress president, taking “full responsibility” for his party’s dismal outing in the Lok Sabha elections. While the party’s apex decision-making body, the Congress Working Committee (CWC), has remained steadfast in asserting the resignation has been rejected, Gandhi has stood his ground. But that, party sources say, is only one part of the crisis the Grand Old Party plunged into after its stocks crashed, yet again, at the electoral Sensex.

Sources say the CWC is expected to meet soon, maybe as early as the coming weekend, and urge Rahul afresh to stay on as the party chief. However, party veterans are now coming to terms with the possibility that Rahul may not relent, and his mother, Sonia Gandhi, will still call the shots on the party’s functioning from behind the curtains. Outlook has learned that a number of senior leaders who continue to enjoy various posts in the party, including several CWC members, may be relieved of their services soon.

On Thursday, Congress leader Vivek Tankha, who failed in his second consecutive bid to enter the Lok Sabha from Madhya Pradesh’s Jabalpur constituency, resigned from all posts he held within the organization and urged other party colleagues to follow suit. Tankha underlined that the party “cannot afford a stalemate for too long” and urged Rahul to carry out “drastic changes to revive the party”.

Tankha’s open appeal to all party officer bearers to resign from their posts and pave the way for a change was followed up, on Friday, with a large number of party leaders from the Congress party and women’s wing, the Mahila Congress, offering to step down. The party has also taken other state-specific decisions over the past few weeks, dissolving various committees, district and block-level units across states such as Karnataka, Uttar Pradesh and Delhi.

The Congress president-at-large, sources say, has been angry at the “orchestrated campaign” by the party’s senior leaders who have urged him to stay on. He wants the veterans to “actually share responsibility for the poll rout instead of just saying that the defeat was a collective failure of the party”.

At his interactions with some senior leaders from various Congress state units and with the newly elected Lok Sabha MPs of the party, Rahul has repeatedly stressed that his resignation was intended “to convey that there must be accountability, in victory and defeat alike”. A senior party leader, who met the sulking chief recently, told Outlook, “Rahul is pained by the fact that while every party leader has said that he is not responsible for the defeat and commended his leadership, barely a few have actually offered to resign from party posts, hiding behind the claim of a collective responsibility”.

The CWC had, on May 25, authorized Rahul to carry out a “complete restructuring” of the Congress organization. Sources close to Rahul say the Wayanad MP believed that his insistence on quitting as party president would force other satraps holding key positions within the organization to also put in their papers, paving the way for a “seamless transition”. That, however, has not happened even after a month of Rahul’s resignation, forcing the Gandhi scion to tell a delegation of Youth Congress members who called on him, on Thursday, that the party was “full of people who only think about their individual political careers”.

So far, only a handful of state Congress presidents has formally offered their resignation, notable among them are Ajoy Kumar (Jharkhand), Raj Babbar (Uttar Pradesh), Niranjan Patnaik (Odisha). Chief Minister Kamal Nath, who also heads the Madhya Pradesh Congress unit, has told party general secretary in-charge of MP, Deepak Babaria that he may be relieved from his organizational responsibility. On Friday, in what was the first party decision signed by Rahul as Congress president since the May 25 meeting, Chhattisgarh chief minister Bhupesh Baghel was relieved of his charge as the state Congress president and replaced with Mohan Markam. More such organizational changes, starting with the state units, are likely over the next few days.

The revamp, sources say, will be “most drastic” in states like Jharkhand, Maharashtra and Haryana, scheduled for assembly polls later this year. Factional feuds in each of these state units have been raging on for a long time and there is a fear, sources say that several more senior leaders from these units could switch to the BJP before the assembly polls. Rahul, according to a party veteran, is now “past the fear of losing more leaders to the BJP”.

The senior leader told Outlook, “Rahul believes that those who wish to jump ship now are welcome to do so but the Congress’ doors should be closed to them forever if they do and that the party must rid itself of opportunists”. A risky gamble, the leader said, underscoring the dire straits the party is in currently, there may soon be no leaders left. “The crisis is only set to get deeper,” he said.