The Congress is observing the day as Kisan Adhikar Divas and has taken out protest marches in all state capitals. 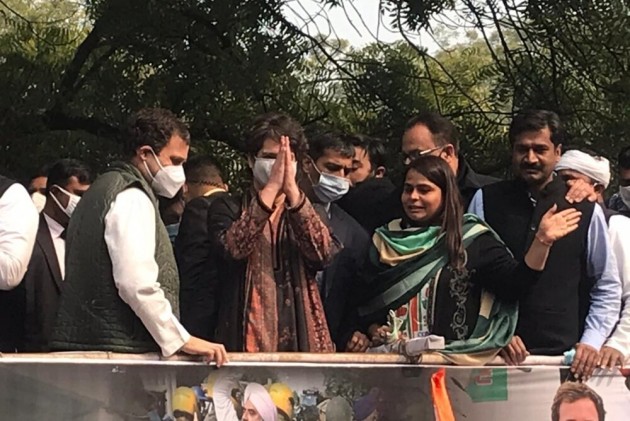 Congress leader Rahul Gandhi leading a march expressing solidarity with the farmers on Friday at Jantar Mantar said that Prime Minister Narendra Modi doesn't respect farmers and wants to tire out those protesting against laws.

He said talks with the unions are part of the government’s delaying tactics, but the farmers won't relent and Modi has to take back farm laws

Ahead of the ninth round of talks between farmer leaders and the centre to resolve the issue of new farm laws, Congress leader Rahul Gandhi on Friday supported the ongoing protests and spoke out against the rising fuel prices in the country.

He asked people to join the farmers' "satyagraha" against the Modi government.

Congress leader Rahul Gandhi on Friday led the party's protest in the national capital in support of the agitating farmers, and said his party will not relent till the new farm laws are repealed.

Congress is observing the day as Kisan Adhikar Divas in support of farmers' rights.

Rahul Gandhi was accompanied by AICC general secretary Priyanka Gandhi Vadra and other leaders of the Delhi Congress at the protest outside the Delhi LG's residence here as part of the countrywide agitation.

Addressing the gathering, the former Congress chief said the Congress party will not step back till the time the government repeals these three farm laws.

"These laws are not to help farmers, but to finish them. These laws are aimed at helping corporates like Ambani and Adani instead," he charged and added, "That is why we are standing in favour of the farmers".

"The BJP government will have to take these black laws back. Till the time these laws are repealed, Congress party will not relent," he told the protesting Congressmen.

"The Narendra Modi government earlier tried to take away the land of farmers, when it brought the land acquisition Act and the Congress party stopped them at that time. Now the BJP and their two-three friends are once again attacking the farmers and have brought these three farm laws," he also alleged.

The Congress is taking out protest marches at all state capitals in the country and will gherao Raj Bhawans. The party is also protesting against fuel price hike.

The protests come on a day the government is holding the next round of talks with leaders of farm unions to end the deadlock over their agitation.