There are reports that Rahul Gandhi ticked him off at the CWC meeting on May 25 by noting that Rajasthan and MP chief ministers, besides former finance minister P Chidambaram, "kept their sons over the party's interests". 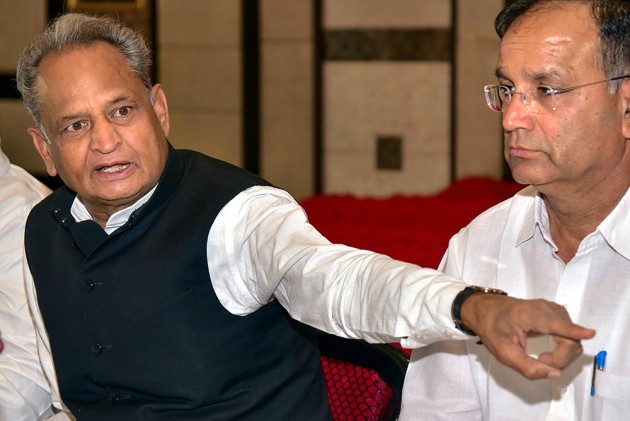 Rajasthan Chief Minister Ashok Gehlot, who has been in the eye of the storm after Congress drew a blank in the state in the Lok Sabha elections, has said that Rahul Gandhi is authorised to make all the required changes to the organisation as well as party-ruled state governments.

In an interview to PTI, he said that in such challenging times for the party, no leader should hanker after any position and the only priority should be to revive the party by standing behind Rahul Gandhi, who has been asked to fix accountability for the losses.

Asked about certain reported remarks made by Rahul Gandhi at the CWC meet against him, he said they were "quoted out of context", but maintained that the Congress president "has all the right to make any remark he deemed fit, in party interest".

He did not give a direct answer when asked whether he would resign in the wake of the party's defeat in Rajasthan, where the Congress failed to open its account and his son was defeated from Jodhpur, barely five months after winning the assembly polls.

"Congress president has all the right on whatever changes he wants to initiate in the organisation or the governments, the working committee has left it to him," Gehlot said.

"For any leader in the country, priority should not be any position and the only priority should be how to revive and strengthen the Congress party and and how they can contribute," he said.

He said whatever the high command decides should be binding on all and "position should not be a priority for any leader".

There are reports that the Congress chief ticked him off at the CWC meeting on May 25 by noting that Rajasthan and Madhya Pradesh chief ministers, besides former finance minister P Chidambaram, "kept their sons over the party's interests".

On Rahul Gandhi's reported remarks, he said, "The comments are being quoted out of context, as the same were made in a different context. But, the Congress president has all the right to comment on anything in the party's interest."

He added that he has addressed over 125 rallies in different constituencies across Rajasthan during elections, with three to five in each Lok Sabha constituency and no demand of any candidate was ignored.

He contended that this kind of "one-sided" results can only be possible with polarisation on the basis of religion and caste which is not in the interest of democracy.

Pointing to similar results in many states with victory margins between one lakh to six lakh votes in most constituencies, Gehlot said it is beyond imagination as this has never happened in the country's history.

"That is why people have doubts about the EVMs. Such a defeat has never happened in a democracy," he said.

The Rajasthan chief minister said the manner in which the Congress president has fought the battle against the BJP all these years, going by his thoughts for the country, countrymen and towards humanity, "it is only Rahul Gandhi who can fight out the BJP and he will finally emerge victorious".

"The truth is on our side and the truth shall finally prevail," he added.

Gehlot said such a situation in the Congress had come earlier too when Indira Gandhi lost the election and the Congress was routed from many states in 1977. Then too, people brought her back and Indira Gandhi resurrected the party and emerged victorious.

"Thereafter, the Congress bounced back in 1980 and ruled for 25 years," he said, adding that the Congress party has the power to resurrect as it is fighting the battle of ideology and people will stand by it.

"Such trying and challenging times have come upon our party in the past too, but Congress has the resilience to pass through and resurrect. Our leadership is aware of such times in the past.

"Congress has never left anything wanting in nation's interests. The entire rank and file of the Congress are together and are behind Rahul Gandhi in strengthening the party again," he said.

The veteran Congress leader claimed that Prime Minister Narendra Modi, despite Rahul Gandhi's attempts, did not campaign on principles and policy and instead polarised the election on religious and caste lines.

"It is easy to ignite the fire, but difficult to douse it. Congress has strengthened the social fabric of the country, but such religious and caste polarisation is not good for the country or democracy," he noted.