The Opposition has been cornering the Centre on the contentious farm laws in Parliament, with the uproar often leading to washing out of proceedings in both Houses. 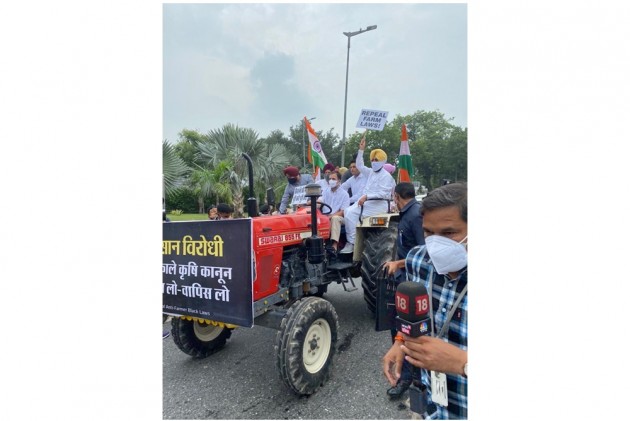 Congress leader Rahul Gandhi drove a tractor to Parliament to register his solidarity with farmers protesting against the three farm laws and asked the government to repeal them at the earliest.

Dressed in shirt and trousers with a face mask on, Gandhi said, “I’ve brought farmers’ message to Parliament. They (Government) are suppressing voices of farmers and not letting a discussion take place in Parliament.”

“These laws are aimed at helping only two-three industrialists. The entire country knows for who whom these laws have been brought. These laws are not for the benefit of farmers and that is why they have to be withdrawn," he added.

Congress leaders Randeep Surjewala and Youth Congress chief BV Srinivas along with a number of party leaders were detained by the Delhi Police outside Parliament and taken to Mandir marg police station.

"We will not be cowed down by such actions. This struggle will continue under the leadership of Rahul Gandhi and we will not allow the Modi government to hand over the rights of 62 crore farmers to three-four industrialists," Surjewala told reporters after he was detained.

The BJP has, however, termed the move as "theatrics".