The Gandhi scion attacked the prime minister a day after the latter said Kerala, where the BJP won no Lok Sabha seat, was as dear to him as his Lok Sabha constituency Varanasi. 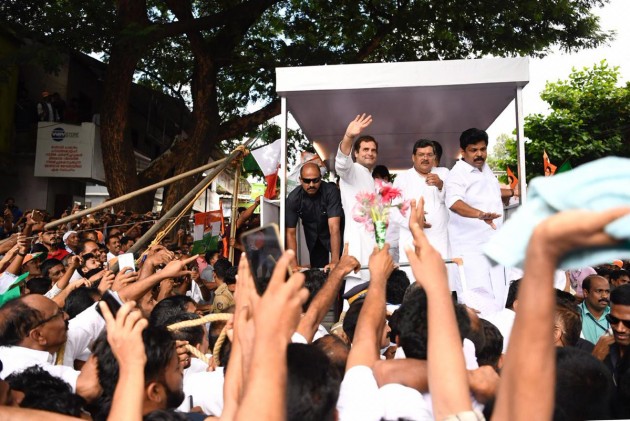 On the third and final day of his thanksgiving visit to his new constituency Wayanad in Kerala, Congress President Rahul Gandhi once again launched into a tirade against Prime Minister Narendra Modi, saying the states not ruled by the BJP received step-motherly treatment.

The Gandhi scion attacked the prime minister a day after the latter said Kerala, where the BJP won no Lok Sabha seat, was as dear to him as his Lok Sabha constituency Varanasi.

Rahul said the BJP viewed those not following the RSS ideology as non-Indians and vowed to fight out the alleged bias.

The Congress president, who held over 10 roadshows across his constituency spread over three districts of Wayanad, Malappuram and Kozhikode, left for New Delhi from the Kozhikode airport this afternoon.

On the final day, he held roadshows at Engapuzha and Mukkam, two small towns in Kozhikode district to thank voters. He chose the occasion also to attack Modi and the BJP.

Addressing people during his roadshows, Rahul Gandhi said Modi divided Indians for which the country will have to pay the price.

"I know the prime minister will not treat Kerala the same way he treats Uttar Pradesh because the CPI(M) is ruling here. He can come here and say whatever he wants," he said, referring to Modi's speech at Guruvayur in Kerala Saturday.

After offering prayers at the famous Sri Krishna temple, Modi Saturday said the Bharatiya Janata Party was not working for mere electoral politics but was working to ensure that India gets its place of pride in the international arena.

"Elections have their place in democracy and it is the responsibility of the winner to take care of all 130 crore people. Those who made us win and those who could not, both are our (people). Kerala is as dear to me as Varanasi," he had said, referring to his Lok Sabha constituency in UP.

The Congress chief, however, said he did not think the prime minister would be "fair" either to Wayanad or to Kerala and he did not expect cooperation from him and the BJP-led Central government for its development.

Referring to his meeting Saturday with the CPI-M MLA representing Kalpeta, which falls under the Wayanad Lok Sabha constituency, Gandhi said there might be "ideological differences" (between the Congress and the Left), but both would work together for Wayanad's development, setting aside their differences.

The Congress Party is here to ensure that Mr Narendra Modi's politics of division doesn't succeed. Our job is to unite the people of India: Congress President @RahulGandhi#RahulGandhiWayanad pic.twitter.com/L4XeoKmKNG

"We might have ideological differences and we will continue to fight along those lines. But there are many things which we agree on for the future of Wayanad. On those things I would like to cooperate," he said.

"Sad part is, I do not expect any such cooperation from our prime minister or from the BJP. Because they are blinded by hatred. They are blinded by anger. Because either you follow the ideology of RSS or you are not an Indian," he said.

Vowing to fight out this alleged bias, the Congress chief said, "I promise you that we will not be ruled by Nagpur (the RSS headquarters)."

Speaking at Mukkam, he said no country has strengthened by the division of its people.

"Narendra Modi divides Indians. His is basically the idea of division. People are angry in India today. The division is going to be a disaster for the country," Rahul said.

As in the last two days, hundreds of party workers and locals, including women and children, greeted Gandhi during road shows at Engapuzha and Mukkam, many of them wearing T-shirts carrying "Rahul we need you" and "Rahul pada" (army) slogans.

Earlier in the day, Gandhi spent some time to meet Rajamma Vavathil, a retired nurse from the state who had taken care of him at Delhi's Holy Family Hospital after his birth on June 19, 1970.