As per the case list uploaded on the apex court website, a three-judge bench comprising Chief Justice N V Ramana and justices Surya Kant and Hima Kohli would hear the matter. 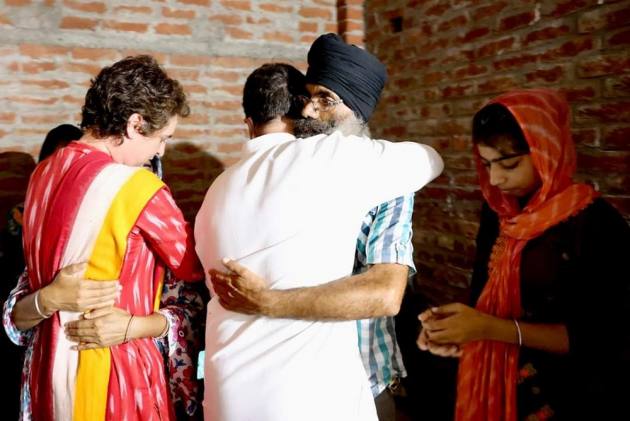 Taking cognisance of the violence in Uttar Pradesh's Lakhimpur Kheri, the Supreme Court has decided to hear the matter Thursday, even as Congress leaders Rahul Gandhi and Priyanka Gandhi Vadra met the grieving families Wednesday and promised them all help.

As per the cause list uploaded on the apex court website, a three-judge bench comprising Chief Justice N V Ramana and justices Surya Kant and Hima Kohli would hear the matter.

Eight people were killed on October 3 as violence erupted during a farmers' protest.

The Uttar Pradesh government Wednesday allowed the Congress leaders to visit the violence-hit district after initially saying no, and also released Vadra from three days of preventive detention.

The day also saw an AAP delegation meet the affected families in Lakhimpur.

No arrest has been made in the case so far.

Initially, the state government had denied permission to Rahul Gandhi for his visit, which led the Congress leader to allege at a press conference that there is "dictatorship" in the country and farmers are being "systematically attacked".

The BJP accused Rahul Gandhi of trying to fan unrest over the incident.

Later, the state government allowed all political parties to visit the state but not more than five people at a time.

They were joined by Deepender Singh Hooda as they staged a brief sit-in inside the airport on being asked to travel to Lakhimpur in a police vehicle. They were finally allowed to go in their own car.

"First, I was told that I can go in my own vehicle, now you are saying that you will go in a police vehicle. They are doing some mischief," Gandhi told reporters.

After he left the airport, it took him a couple of hours to reach the Provincial Armed Constabulary guest house in Sitapur, around 88 km from Lucknow, where Priyanka Gandhi was kept in detention since Monday morning.

Sitapur Sub-Divisional Magistrate (Sadar) Pyarelal Maurya said in the evening that Priyanka Gandhi has been released.

In Chandigarh, police used a water cannon to disperse AAP workers trying to lay siege to the Punjab governor's house over the Lakhimpur Kheri violence.

Sources said Mishra is understood to have briefed Shah about Sunday's incident in his home district of Lakhimpur Kheri. Mishra has denied allegations of his son's involvement.

Shiromani Akali Dal chief Sukhbir Singh Badal also said a party delegation will meet Shah and request him to ensure exemplary action against those involved in the killing of farmers.

Samajwadi Party chief Akhilesh Yadav alleged the BJP government is committing more atrocities than the British, and its minister is threatening to suppress farmers' voices.

BKU leader Rakesh Tikait demanded Mishra’s resignation and the arrest of all accused, warning that a nationwide agitation will be launched if authorities failed to implement within a week the agreement made with the farmers.

"Our protest has not ended. We will wait till eight days since the agreement and if the demands are not fulfilled a nationwide agitation would be launched," Tikait told reporters.

On its part, the BJP accused Rahul Gandhi of trying to fan unrest over the incident, alleging the Gandhi family is using the tragedy as an opportunity to derive political mileage.

He alleged the Gandhi family had nothing to do with either farmers or any other section of society. "They are not even concerned about the Congress. All they want is that their fortunes should not be scuttled."

Meanwhile, Gurvinder Singh alias Gyaniji, one of the four farmers killed in the violence, was cremated on Wednesday morning after a second autopsy was conducted as demanded by his family, police said.

The family members of the 22-year-old, hailing from Moharia village of Bahraich district, had refused to cremate him, claiming he was shot dead but the post-mortem report had no mention of it. They had received the support from farmer leader Rakesh Tikait and Punjabi singer Sonia Maan.

Eight people, including a journalist, were killed in the violence.

Farmer leaders have claimed that MoS Home Ajay Mishra's son Ashish was in one of the cars that, they alleged, knocked down some protesters opposing Deputy Chief Minister Keshav Prasad Maurya's visit on October 3.