Ever since his defeat from Amethi, Rahul Gandhi has visited the constituency just once despite its proximity to Delhi. 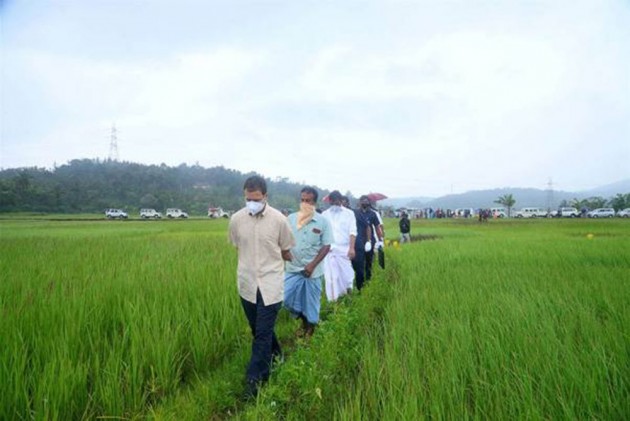 Congress leader Rahul Gandhi wrapped up a three-day tour of his Lok Sabha constituency – Wayanad in Kerala – on Wednesday evening. By all accounts, the tour, like four of his earlier visits over the past 17 months since he won Wayanad in the Lok Sabha polls, was a fairly successful one.

Rahul inaugurated an Arthroscopic Surgery Unit and Ventilator Unit at Wayanad’s district hospital towards which he had contributed from his MPLADS fund. He held several meetings with various officials and his party’s volunteers to take stock of the coronavirus spread in his constituency and how it was being managed. He met two sisters – Kavya and Karthika – who had lost their family members and their home in the Kavalappara landslide last year and gave them keys to a new house. He also met rice farmers and was treated to a traditional sadya.

And, he addressed an open press conference where, among other things, he spoke about the resilience of the people of Kerala and the state’s health workers during the Covid-19 pandemic while adroitly making a political statement about the “blame game” between the Centre and state government over inadequacies in general Covid-19 management.

As the MP from Wayanad, Rahul ticked all the right boxes and his popularity with his voters who had given him a 4.3 lakh victory margin over his nearest rival in last year’s Lok Sabha polls seems to be intact, if not amplified. There is, however, another side to how Rahul has been nursing Wayanad; one that may seem tangential and somewhat relevant only because of the benefit of hindsight – why couldn’t, or didn’t, Rahul dedicate himself to Amethi in a similar way when he represented the family seat in Lok Sabha between 2004 and 2019?

Since he won Wayanad, Rahul has made five visits to the constituency, spending an average of three days in the picturesque hill station on each tour. Compare this with Rahul’s Amethi outreach between 2014 and 2019 – or to the period since he lost the seat to BJP’s Smriti Irani by over 55000 votes. Sources in the Congress’s Amethi unit who coordinated Rahul’s visits to the still under-developed constituency in Uttar Pradesh tell Outlook that the Congress leader spent just about 35 days spread over 17 visits during the five years between 2014 and 2019. For the remainder of those five years, Rahul had largely left Amethi’s well-being under the care of his sister, Priyanka Gandhi Vadra, who as Lok Sabha results would suggest, clearly didn’t do a great job. Ever since his defeat from Amethi, Rahul has visited the constituency just once despite its proximity to Delhi and the traditional bond that the Gandhi family claims to share with its residents.

Rahul or his party colleagues may justify the former Congress president’s relatively frequent visits to Wayanad and his social distancing from Amethi by arguing that he now represents the former in Lok Sabha while responsibility for nursing the latter lies with Irani. Such a claim – though, in all fairness, no Congressmen has so far proffered it publicly – would fail to cut ice simply because of Rahul’s own assertions in Amethi when he visited the constituency after losing it to the BJP last year. “My relationship with Amethi is personal; I will never leave Amethi,” Rahul had told his former voters when he visited the constituency in July last. He had added, “I was MP from Amethi for 15 years and I share a bond of love with all of you. Don’t think I don’t belong to you; I will keep visiting though I have to devote time to Wayanad too but I am there for you whenever you need me, even if it is at night or at 4 in the morning.”

Rahul hasn’t returned to Amethi since though he did reach out to the constituency during the early months of the Covid-induced lockdown. He had a virtual interaction with local Congressmen from Amethi in May to discuss Covid management in the constituency and also sent volunteers with truckloads of ration, masks and other essential supplies for distribution in this largely rural district. But that was it, or at least what is in public domain. As a politician, Rahul should know well by now that simply telling the people of a constituency that he shares a “bond of love” with them doesn’t win them over; one has to also be seen making an effort to live up to these claims – as Rahul is now seen each time he visits Wayanad.

Amethi, unlike Wayanad, also holds immense political and personal significance for Rahul and the Gandhi family. Amethi had marked the successful electoral debut of Rahul’s father, the late Rajiv Gandhi, in the 1981 Lok Sabha by-election following the sudden demise of sitting MP and Rahul’s uncle Sanjay Gandhi in a plane crash. Rajiv won the seat in the 1984, 1989 and 1991 general elections (though he was assassinated before the results for the 1991 polls came out). Sonia Gandhi too marked her successful electoral debut from Amethi in 1999 before vacating the seat and moving to Rae Bareli in 2004 when Rahul took the electoral plunge. Unlike Wayanad, Amethi is a backward constituency, an undistinguished part of UP despite electing high-profile MPs like the four Gandhis or even Smriti Irani. As such, Rahul should have realised that he needs to nurse Amethi with much more dedication than what he is now showing towards Wayanad.

When Rahul had decided to contest the 2019 Lok Sabha polls simultaneously from Amethi and Wayanad, his party had vociferously asserted that the former will always remain his karmabhoomi, whether he wins both seats or otherwise. Officially, Rahul had justified his decision to contest from Wayanad on grounds that he wanted to become a bridge between the southern Indian states and the country’s power centre – Delhi – in the north. However, political observers and many within his own party had indicated that the shift to Wayanad was a calculated political move because of the uncertainty of Rahul’s electoral prospects in Amethi. When the Lok Sabha results were announced, the doubts on Rahul’s winnability from Amethi were confirmed.

Irani, who had been defeated by Rahul from Amethi in 2014, never gave up on her ambition to avenge her defeat. Her persistence, aided in great measure by the popularity of Narendra Modi and his BJP as also Rahul’s lack of visibility in Amethi, helped Irani win the seat five years later. However, Congress insiders kept insisting – many still do – that Rahul would not give up on Amethi despite the humiliation.

With his relentless Wayanad outreach, Rahul has showed that he knows how to nurture a constituency and his former voters in Amethi may even think that they could give him another chance in 2024. However, Rahul needs to also be seen as someone willing to reach out to Amethi afresh if he still hopes to avenge the 2019 disgrace. Rahul needs to replicate his Wayanad model for Amethi if he still hopes to bring the seat back into the family fold; unless he has decided to forsake the constituency for good.