Rahul Steps In Again To Resolve Infighting In Chhattisgarh Govt; Bhupesh Baghel To Stay As CM But... 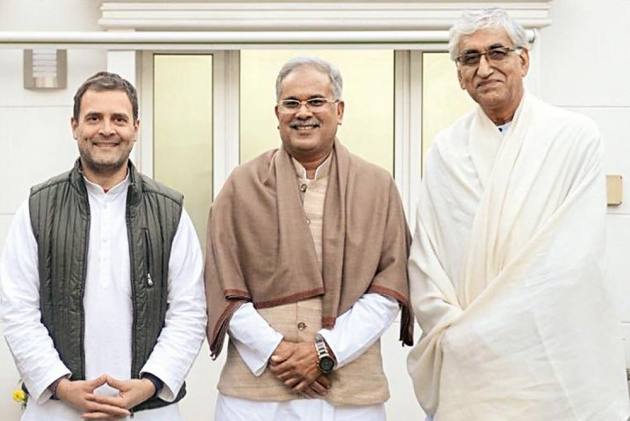 Even as the truce brokered by the Gandhi family in the Congress party’s squabbling Punjab unit continues to be restive, former party president Rahul Gandhi, on Tuesday, stepped in, once again, to nip a possible implosion within his party’s government in Chhattisgarh. Gandhi met Chhattisgarh chief minister Bhupesh Baghel and health minister T.S. Singh Deo for nearly three hours at his Tughlaq Lane residence in a bid to resolve the simmering turf war between the two leaders.

This is the second meeting that Gandhi has had to call in recent months to resolve the crisis brewing within the Chhattisgarh government. Baghel and Deo have been at loggerheads for several months now. Deo has repeatedly complained to the central leadership that the chief minister routinely undermines him. Since May this year, he has also been reminding the party high command of their reported promise – made to Deo soon after the December 2018 Chhattisgarh assembly polls – of making him the CM after Baghel finishes two and a half years in office.

Outlook had reported, on July 27, that Gandhi will be summoning Baghel and Deo to Delhi for another round of talks in August. As reported by Outlook earlier, while Gandhi has, for now, refused to give in to Deo’s demand for a making him the CM, Baghel has been cautioned against functioning unilaterally – a charge Deo has routinely leveled against the CM – and been told to “show due respect” to the health minister.

Sources told Outlook that the chief minister has also been told to carry out a small cabinet reshuffle soon, in which Deo is expected to be given charge of some important portfolios while a couple of his loyalist MLAs may be inducted as ministers too. It is not immediately clear whether as part of the peace formula the party high command has also decided to elevate Deo as the state’s deputy chief minister but sources say that such a plan cannot be ruled out entirely. A few incumbent ministers known to be close to Baghel and publicly vocal against Deo may also be removed from the cabinet, sources say.   Rahul Gandhi has directed AICC general secretary (organisation) KC Venugopal and party's Chhattisgarh in-charge PL Punia to ensure that all grievances between Baghel and Deo are heard and expeditiously resolved and to keep him informed about the deliberations.

It is learnt that though the Congress high command is in no mood to effect a leadership change in Chhattisgarh at this moment – Baghel has, in recent years emerged as a close aide of Rahul and also earned the confidence of Priyanka Gandhi Vadra- it is also not willing to let the rising complaints against their chief minister from various quarters within the party slide without a warning.

Deo’s unhappiness against Baghel stems primarily from two factors – the high command’s refusal to keep its promise of anointing him as the CM and Baghel’s alleged interference in the functioning of the state’s health ministry, often without taking the health minister into confidence. However, sources say, Deo isn’t the only one complaining regularly about Baghel’s working, administrative decisions and policies. A section of party leaders have reportedly been complaining to interim Congress chief Sonia Gandhi and Rahul Gandhi about Baghel’s “soft spot for a select group of industrialists and private companies at whose behest he has been making decisions that could harm the tribal-dominated and densely forested state’s ecology and social cohesion”. Baghel was also embroiled in another controversy recently when his government decided to bring a legislation to take over a hospital owned by his kin – a Congress leader – despite Deo cautioning him against the move.

The friction between Baghel and Deo began increasing during the Covid pandemic, when the CM walked away with credit for every good initiative while any failure was stacked up at the health minister’s doorstep. Things came to such a pass by the second Covid wave that decisions regarding the health ministry were allegedly taken in the CM Office with Deo not even being informed about them. Deo publicly disagreed with Baghel’s plans to allow private hospitals to open branches in rural areas and be rewarded with several incentives for doing so. Deo said the new health policy was neither discussed in the cabinet nor with him, even though he is the state’s health minister. He has maintained that he cannot support Baghel’s pro-corporate health policy.

Of course, what seems to have irked Deo the most is the party high command’s steadfast denial of replacing Baghel with him as the CM. Those close Deo, the titular head of the state’s Sarguja royal family, say he was also deeply hurt by Baghel and PL Punia – the party’s in-charge for Chhattisgarh – recently telling media that talk of Rahul’s 2.5 year power-sharing formula was nothing more than an imaginative spin. “These things happen in coalition governments and we have an absolute majority of our own… where is the question of a 2.5 year power sharing formula,” Baghel had said.

Deo, sources say, also believes that Baghel has unleashed a smear campaign against him through Congress MLAs loyal to the CM. Last month, Deo had walked out of the Chhattisgarh Vidhan Sabha proceedings demanding a “clear statement” from the Baghel-led government over fellow Congress MLA Brihaspat Singh’s explosive claim that the health minister had tried to have him killed. Singh, a tribal, is the Congress MLA from Ramanujganj constituency in Chhattisgarh’s Balrampur district, which falls under the erstwhile Sarguja principality. On July 24, while on a visit to Ambikapur, Singh’s convoy was attacked by alleged Congress workers. Singh had alleged that the attackers were sent by Deo. An FIR was then lodged under various sections of the Indian Penal Code and the SC/ST (Prevention of Atrocities) Act, naming Sachin Singh Deo, a relative of the health minister, and others as the accused.

Singh had also addressed a press conference in Raipur with nearly 20 other Congress MLAs, all Baghel-loyalists, in attendance where he said Deo was trying to have him murdered because he had praised Baghel. While Deo brushed aside Singh’s allegations as an “emotional outburst”, sources say that shortly thereafter several party MLAs close to the CM had made derogatory attacks against him.

Congress sources say Baghel has, in the past two years, taken a leaf out of Rajasthan chief minister Ashok Gehlot’s book on handling Sachin Pilot’s dissent. Baghel has been trying to appropriate Deo’s supporters. Several MLAs who were once loyal to Baba (Deo’s popular appellation across Chhattisgarh) are now firmly with Baghel. Given the changed arithmetic, Baba’s support base within the legislative party has depleted and this makes a change of leadership in Chhattisgarh even more improbable.

Known across Chhattisgarh as a ‘gentleman politician and dyed-in-wool Congressman loyal to the Gandhis’, Deo has, say those close to him, decided to let go of his insistence on being made the CM for now. He has, however, told the Gandhis that he will not let anyone, least of all Baghel, who is also Deo’s junior in politics, trample over his honour. Deo has also assured the Gandhis that he will not do anything that hurts the party or its government in Chhattisgarh.